Abbott looking for the women behind Howard’s success

The importance of the female vote for the coalition shouldn’t be underestimated -- they’ve historically enjoyed a dominance among women -- but a dominance that the polling suggests has ended, writes Possum Comitatus.

We often hear about how Tony Abbott has a problem with women voters (or rather, how women voters have a problem with Abbott), which even if true, isn’t a particularly new phenomenon to the post-Howard coalition. Brendan Nelson and Malcolm Turnbull  experienced polling problems with women voters at various times during their leadership. But what isn’t often appreciated is just how important this female voter deficit for the coalition is when you consider the history of the female vote under the Howard years.

If we track the primary vote of each major party since 1996 using Newspoll quarterly data, we can see how gender played a pretty critical role when it came to Howard getting re-elected. 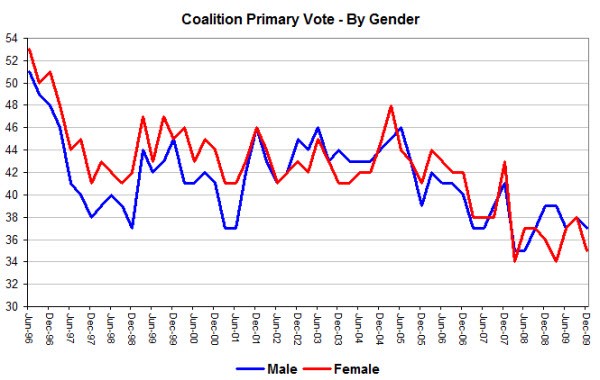 Women saved Howard in the 1998 election, they prevented his dismal polling in early 2001 from being so poor that a Costello coup would have been inevitable, they gave Howard an increased majority in 2004 against Latham and saved Howard from a complete and utter electoral rogering in 2007.

Over the entire Howard government era — from its election to its defeat — Howard enjoyed an average 1.6% lead on primary vote terms with males, but a 3.2% lead with females.

Over the Howard era until December 2006 (up to the Rudd leadership of the ALP), those leads were 2.5% with males and 4.2% with females.

Yet, since the Rudd government, the coalition has been an average 8.1% behind Labor among males, and 9.3% behind Labor with female voters on primary vote terms. The consistency of the female vote for the coalition over the first 10 years of the Howard government is something that really stands out here — the early rises and falls of the coalition’s political stocks was mostly driven by men, the September 11 recovery being particularly notable. It wasn’t until early in the fourth term of the Howard government, around when Workchoices first popped its head up, that the female and male votes moved strongly in lockstep together for the first time for the coalition — unfortunately for them that movement happened to be against them.

The importance of the female vote for the coalition shouldn’t be underestimated — they’ve historically enjoyed a dominance among women, a highly consistent dominance at that — but a dominance that the polling suggests has now well and truly ended. When people talk of Tony Abbott or the coalition as being “weak with women”, it’s worth keeping in your thought orbit the historical dynamics we see here.