Tips and rumours: No Christmas spirit in the public service

Which was the tight-arsed government department that docked everyone's pay (or forced them to make up the time!) because of some employees leaving five minutes early on Christmas Eve?

Network Ten last week was issued with a legal letter asking them to stop running their on-air promos for their summer theme night called “Monday’s World Game Night” on their sports channel ONE. Ten have responded advising that SBS do not legally have the right to stop Ten using the words “world game” as they haven’t trademarked the words only the brand and they aren’t using it as a brand just advertising football-soccer as it is known worldwide and Ten will be using it in the future.

I work for the Department of Education, Employment and Workplace Relations “Tools For Your Trade” campaign, and came back to work on the 29th of December  to find an all-work memo advising all employees that as half a dozen employees had signed off and gone home five minutes early on Christmas eve, that all employees in our department had the choice of either making up the time at some point this week, or having it deducted from their pay. Five minutes … on Xmas e4ve.

I’ve been advised that even though I didn’t work Xmas eve, I’m still expected to make up this time. The HR time taken to amend these pay slips would actually work out to be worth more than deducting five minutes pay from every employee’s salary. I look forward to sending the photos of eight different powerboards full of PCs plugged into one double adapter to my union.

I was shocked to discover that Waverley Council has been spending ratepayers’ money fighting the Australian Tax Office in an attempt to reduce its tax deduction, i.e. in an attempt to pay more tax. The case revolved around the GST treatment of credit card surcharges on payments for council services. In June this year, council’s appeal to the Administrative Appeals Tribunal was rejected. Why the council would want to fight such a case is beyond me, and apparently so unique that the motive baffled even the person who prepared the case summary.The fact that the council is willing to do this is appalling. The fact that this was not reported, even more concerning.

A Freo councillor quoting Saddam Hussein: “Cr John Dowson noted that this has been a very interesting and exciting year and that we have a lot of new and exciting talent on council now. He also read a quote from Saddam Hussein, in the spirit of Christmas and goodwill to all men ‘I call on you, not to hate as hate does not leave a space for a person to be fair and it makes you blind and closes all doors of thinking and keeps one from balanced thinking and making the right choice’.”

Perhaps it’s not just the awful name, iSnack 2.0,  that is the problem with the Kraft Vegemite product extension snack.  I was at my local Coles store in St Kilda recently and saw rather a lot of the product in its original trial size with its original “name me” packaging. Given how long ago the product was named and then supposedly re- named I was surprised to see this version of the product still in store and picked it up to have a look.  And saw that the product’s best before date is January 19  indicating that it was clearly expected to be all sold by now.

Next to the “name me” packs were the larger sized product with the iSnack 2.0 label (wasn’t this supposed to be a collectors’ item now?).  These expire in the middle of the year.  Neither looked like they were flying off the shelves.  Given we were told that a new name had been selected why isnt it on the shelves?  Or is the product as much as a loser as its first name?

I lost my wallet a couple of months ago, and immediately called my card issuers to have my Amex, Westpac and NAB cards stopped, and replacements issued. The new Amex and Westpac cards turned up in my mailbox within four business days. The NAB people I spoke to told me that, for security reasons, I needed to pick up my replacement from a branch.

I nominated the most convenient local branch, but more than six weeks passed and I still hadn’t picked up my NAB cards. It was at this point, luckily, that I happened to check my NAB account (using my Westpac internet banking, which allows me to login and view NAB from the Westpac site). I noticed that in the past three days there had been cash advances of $1000 (plus additional ATM fees) debited against the NAB MasterCard that had been issued to replace the NAB MasterCard, which had been in my wallet.

These transactions used three different ATMs in Victoria (I am in NSW). I immediately called NAB/MasterCard and asked how it was possible for anyone (including me) to withdraw money using a card and PIN that I hadn’t collected, but which was (I assumed) waiting for me to collect at the local NAB branch. The nice man told me the transactions would be marked as fraudulent, and also that the card and PIN were probably intercepted before getting to the branch. I noted that it was also possible that a NAB staff member at the branch may have been responsible.

Either way, it seems amazing to me that this could have happened. I can understand fraud by people who capture card numbers and PINs using clever technology but it seems quite astounding to me that someone could steal my card and PIN from the bank before they were collected by me. Surely we pay those bank fees so that we can get some service that is a bit better than this! PS: I am not employed in any capacity, nor do I own any shares in any of Amex, NAB or Westpac …

Hitler, the gift that keeps giving. Check out this staff recommendation for a Christmas literary gift in Borders Perth, courtesy of The Worst of Perth: 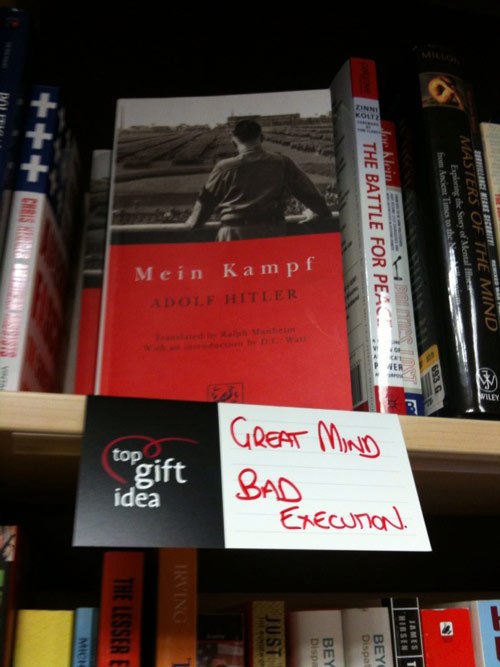