Will groups like “Speak English or Piss Off”, “F-ck Off We’re Full” and “Mate speak English, you’re in Australia now” continue to grow like virtual weeds across the internet?

Adam Penenberg’s piece “Pass It On” in the November 2009 UK edition of Wired magazine looks at Facebook, HotorNot and eBay among others and attributes their success to the power of personal recommendation characterised as the “viral expansion loop”, which Penenberg says requires:

… incorporating virality into a product; in plain English, this means that a company grows because each new user begets more users. Just by using a product, they spread it.

Important to the effectiveness of such viral loops is a particular site’s “viral coefficient”. Penenberg used Netscape founder Marc Andreessen’s Ning social network, established in 2007 as an example: six months after start-up Ning had 60,000 “Ning nets”; by the end of 2009 they estimated there would be 50 million Ning members and 2.5 million Ning groups.

Penenberg says that Ning’s “viral coefficient” is exponential and phenomenal:

That pushes Ning’s “viral coefficient” — the number of additional members each person brings in — way above one. This is key, because if the virality coefficient is one, the start-up will grow, but at a linear rate, eventually topping out. Above one, it achieves huge growth. With Ning, Andreessen estimates the viral coefficient as a whopping 2: each person who signs up is worth, on average, two more people (compounded daily).

So what do viral expansion loops have to do with Australian hate groups?

Quite a lot it seems.

Late last night I was sent a link from a linguist friend who had taken umbrage at the content of the Facebook page “SPEAK ENGLISH OR PISS OFF!!!”

SPEAK ENGLISH OR PISS OFF!!! (SEOPO) describes itself as a group:

For those who STRONGLY BELIEVE that the AUSTRALIAN way of life (culture, language, clothing, etc) should be embraced by all who set foot on her soil and choose to live here.

I’ve spent a few hours since then grazing around in the back-paddocks of SEOPO and related Facebook pages and internet sites that are connected to it. One thing that caught my eye was the [unnamed] moderator’s charting of SEOPO’s apparently spectacular success at attracting members — which as I write this stands at 49,599.

Here is how he reported it:

September 7, 2009 at 5:03pm SPEAK ENGLISH OR PISS OFF!!! 94 Fans, good shit, keep it up WARNING: Fan Cheak is a VIRUS, a Dirty, Non-Australian Speaking VIRUS. All people who have used it or even is tagged in them, must remove any and all tags, and delete all pictures and anything else of the like. SPREAD THE WORD!!

Here is how SEOPO’s membership growth looks on a chart: 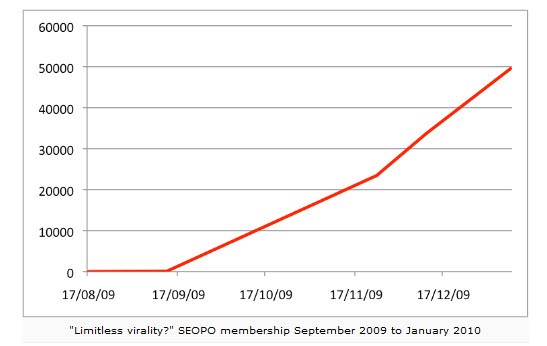 If SEOPO was a business and this was a chart of your paying customers you would be over the moon — from start-up to 50,000 customers in four and a half months!

As Penenberg notes at the end of his Wired piece:

The internet means that anyone, anywhere, can tap into millions of memes spreading from screen to screen. This yields almost limitless level of virality. It’s a huge business opportunity.

And a boon, it seems, for SEOPO and their fellow-travellers. And while they may represent a small fraction of overall traffic, groups such as  SEOPO must be good for businesses such as  Facebook. Despite repeated calls for them to shut down the hate groups that appear to flourishing there,  Facebook appears to have done little to stop them using its pages.

Joshua Hoey looked at this issue in an article in The Age in mid-November last year:

Social networking site Facebook has come under pressure to better regulate its content as racist and offensive groups continue to proliferate on the site. Facebook has a ban on “content that is hateful [and] threatening” and a spokeswoman for the site told brisbanetimes.com.au that there was no place for racism “or any form of hate speech” on Facebook. “We will remove anything of this nature that is reported to us,” she said. “Facebook is highly self-regulating, and users can and do report content that they find questionable or offensive.” But despite Facebook’s self-regulation, many offensive groups remain on the network.

It is pretty easy to see how “self-regulating” Facebook really is.

Over at the imaginatively named “Fuck Off We’re Full” (896 members) Facebook site there has been a recent spate of flaming posts from those opposed to the aims of the group and those behind it, as there has been at SEOPO and the related site of “Mate speak English, you’re in Australia now” (9882 members).

Chasing the links for the moderators and administrators of Fuck Off, We’re Full (Nicholas Hunter Folkes, David Johns, James Parkes and Darrin Hodges — credited as The Creator) leads you into a rather strange world of related Facebook pages, followers and internet sites.

Darrin Hodges is also the founder of The Infidel Diaries, which uses the same URL as Hodges used for his unsuccessful campaign for election to the Sutherland Shire Council, and where Hodges says he wants to:

… educate people about the reality of Islam. Islam is an ideology, a complete system that controls every aspect of a Muslim’s life. The problem isn’t necessarily with the individual Muslim, the problem lies within the core doctrines of Islam itself.

Another site to which Hodge links is to Protectionists — the home page of the Australian Protectionist Party (The APP), which is seeking registration as a political party to run in the next Federal election:

APP begins mega membership drive: Free membership offer! Campaign announced on Australia Day 2009: The Australian Protectionist Party is on the way to registering as a political party to contest the next federal election. At this stage, we have not reached the 500 members required to register. As a sign of our determination to become registered, APP has declared that free memberships will be offered to enable national registration. Time is running out for Australia and we do not have time to muck around. Our nation needs a federally registered political party to represent Australians, and this is what we intend to achieve.

The APP also has a You Tube site and claims to have branches in five Australian states and the ACT and claims some dubious links with the much earlier party of the same name:

The Protectionist Party was an Australian political party, formally organised from 1889 until 1909, with policies centred on protectionism. It argued that Australia needed protective tariffs to allow Australian industry to grow and provide employment. It had its greatest strength in Victoria and in the rural areas of New South Wales. Its most prominent leaders were Sir Edmund Barton and Alfred Deakin, who were the first and second prime ministers of Australia.

There is more — much more — all you have to do is find a link and keep clicking.

Will, as Penenberg suggests, groups such as  “Speak English or Piss Off”, “Fuck Off We’re Full” and “Mate speak English, you’re in Australia now” continue to grow like virtual weeds across the internet? Will they continue the same rate of exponential growth as they have enjoyed in the recent past?

This rapid growth may well be an accident of science or nature, may have been a total surprise to those behind these Facebook pages or may just be an incident of either the inherent virality of Facebook or of the content at these sites.

One thing that I can be reasonably certain of — this popularity doesn’t arise from any particularly intelligent approach to the marketing of their various and closely related “brands”.

That’s Aussies. If you’re going to speak English, use apostrophes and other forms of punctuation properly.

A contributing factor to the growth of intersludge is the ease at which a reader may express an anonymous, fast opinion.

The banality of the ‘like’ button and the simplicity of the click to ‘join’ a group mean that one fleeting thought is forever registered, thus contributing to the viral expansion loop. Buttons pressed when someone has had a bad day, too much to drink, a fight with the neighbour etc are not unclicked later.

Whether such registrations of opinion are for negative or positive causes, they are surely a poor indicator of actual intent. Whilst it’s easy to measure online activities that require a further action (such as filling a form, following a link or making a purchase) it’d be interesting to know if there are any formulas or theories on the volume of opinions expressed online as a true measure of social behaviour.

Thanks again. Would love to see any Crikey follow-up with Facebook on the hate groups.

As a regular user, I’ve reported racist comments and groups to Facebook in the past. I can understand that it would be far too labour intensive for them to reply and detail what action they’ve taken in response to each report, I’ve never noticed any action taken in any instance.

I’ll keep at it – it only takes a few seconds – but in the meantime, the main alternative (at least in a Facebook context) seems to be to set up alternative anti-racism Facebook groups.

A more scientifically accurate (not the forte of racist knuckle draggers) acronym might be SAFU (Sorry, Already F**ked Up).

I don’t think having had a bad day, too much to drink or a fight with a neighbour are excuses for joining hate groups on facebook – but I acknowledge they could be contributing factors.