The death star that may kill us

Meet T Pyxidis, a double star, hidden from clear view by a veil of dust in an obscure constellation that rides high in southern hemisphere skies. According to astronomers, it might be planet earth's executioner. 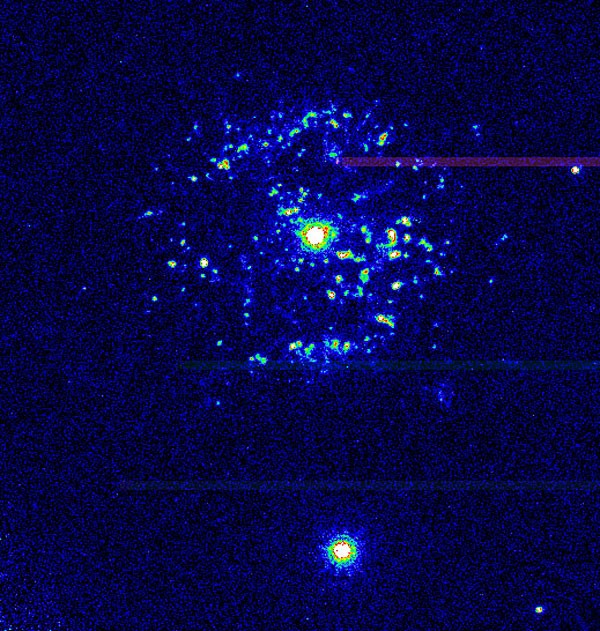 Meet T Pyxidis, a double star, hidden from clear view by a veil of dust in an obscure constellation that rides high in southern hemisphere skies.

According to astronomers at Villanova University, Pennsylvania, this could be planet Earth’s executioner.

Professor Edward Sion, who lead the research, says the binary star may be a ‘ticking time bomb’, because of its previously unknown but now measured as very close  proximity to our solar system.

The Villanova astronomers discovered, while using the Ultraviolet Explorer satellite, that the cosmic couple, a closely spaced white dwarf and a normal yellow star similar to our sun, were a mere 3260 light years away.

And the white dwarf, a star far smaller in diameter than the Earth, but vastly more massive and possessing an incredibly strong gravitational field, was ripping matter off the yellow star at such a rate that its mass is now close to the limit at which a white dwarf can exist before it collapses and then explodes into a catastrophic type 1a supernova.

When white dwarfs are completely destroyed in a type 1a explosion they briefly outshine all the stars in a typical galaxy like ours combined, converting matter into an intense blast of gamma ray radiation.

The process is shown in detail in this YouTube simulation.

Type 1a supernovas are infrequent. Astronomers often describe them as the ‘candles’ that allow them to measure intergalactic distance, but in truth, they are cosmic pyres of incredible ferocity.

They pierce time and space by being visible across millions of light years, beacons that blaze into view when the galaxies which hosted them may be too distant to leave much of a trace on the sensors of the most powerful telescopes on Earth or in space.

To have such a potential candle in the ‘hood is, to put it mildly, disconcerting.

This is how the mildly spoken Professor Sion, concluded his presentation, to a recent meeting of the American Astronomical Society in Washington DC. So, how long do we have? Possibly 10 million years, maybe 10 minutes.  The Villanova team chose to study T Pyxidis because it was known to be a recurrent nova, that is, a white dwarf that was observed to regularly blaze up as the matter that it swallowed up from its yellow companion was compressed to a degree that caused a thermonuclear explosion, a process by which such stars can shed mass and avoid type 1a annihilation.

Well, they still don’t know, but whatever it is that is going on out there is happening much nearer to our fragile and lovely blue planet than anyone could have wished.

At a distance of 3260 light years, a rare type 1a supernova is expected to hit the Earth with a blast of radiation equivalent to 1,000 major solar flares.

Life on earth is very tenacious. Of  course it would continue. But most likely without us.

How much would the Death Star actually cost?

The lack of good journalism

Thanks for that – does this mean my warranties on the white goods are redundant?

Very interesting Ben. Cheers. An actual use of the Chandraskar limit in new reporting!

So I should sell the Prius and buy a Hummer?

I am surprised that the companion star is a yellow star (like our Sun, which actually is “white”).
Usually for a Ia supernova, the companion star is a red giant, which has “puffed out” dropping material on its massive companion. The closest candidate for a supernova type Ia is actually IK Pegasi which is only 150 light years away. The binary stars consist of a white dwarf and a variable star which is apparently on the verge of turning into a red giant (although we might have to wait a few million years). They orbit at a distance of less than the orbit of Mercury. We are overdue for a supernova in our Galaxy (the last one was in 1604, and in galaxies of our size, they are supposed to occur about once every 50 years). A supernova 150 light years away would really ruin our day.

Through what mechanism would it ruin our day? A gamma ray burst I guess. Will they pass through the planet? And how long does the explosion take? Would it be a milli/micro second burst (if so, only the side of Earth facing the star might go) or does a supernova take, days? weeks?