No movement for Tony

Copenhagen might have made the Labor position on global warming more difficult to justify but the Crikey Election Indicator still has the government of Kevin Rudd comfortably favourite as this pre-election year draws to a close.

No movement for Tony. The market remains unmoved. Copenhagen might have made the Labor position on global warming more difficult to justify but the Crikey Election Indicator still has the government of Kevin Rudd comfortably favourite as this pre-election year draws to a close. 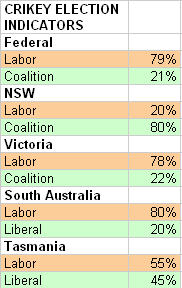 We can’t give you an end-of-the-year forecast from Newspoll because it has called a halt for the year. The best I can offer is the prediction of readers as to what it would have shown last weekend: Labor with a two-party preferred share of 55%, which is pretty much where the actual number has been all year.

Hoping for the 20% chance. Now it’s not just because of my Labor Party prejudice but I really am hoping for the return of the current NSW government in 2011. My big motivation is the pleasure that would come from seeing the state’s newspapers having completely misread public opinion. The Sydney Daily Telegraph and the Sydney Morning Herald have been running a merciless anti-Labor campaign for well over a year now reaching something of a crescendo this  month with their ridiculous petitions calling for an end to fixed-term parliaments.

Somehow the intellectual giants running these journals think that in some miraculous fashion the removal of four-year terms would mean that there was an early election, which would see Labor thrown out. All that would, in truth, happen is that an incumbent Premier doing badly in the polls would continue on for as long as possible making the term a shade longer than four years.

The interesting election next year. The close election in 2010 looks like being in Tasmania where a hung Parliament is the most likely result and some form of alliance between Labor and the Greens the favoured way. The Greens, I note, are doing their best to promote themselves in the electorate of Braddon, where they are currently unrepresented, with the suggestion that money saved by the Commonwealth stopping the building of a tourist road through the Tarkine forest being spent in the north west. Good to see that a party of principle is capable of such blatant pork-barreling.

On the positive side they are aware the problem is complex. That surely deserves to be a quote of the day when you look at the diagram being referred to as published on the MSNBC website. A danger sign from China. I notice that the distinguished American economist Professor Charles Goodhart has signalled that the 30% annual monetary growth is something to be worried about. In his opinion, Beijing will have to slam on the brakes soon. “When that happens the locomotive will slow, and probably reveal a string of non-performing loans; it has always been thus,” he said. Professor Goodhart said it was too early for the world’s central bankers to congratulate themselves for averting a slump. And, if he is right, for our Reserve Bank to think that China has lifted us out of the economic mire.

For climate change policy, last year ended with two contradictory scenes: one, the successful passage through parliament of Australia’s carbon price laws; the other, the dispiriting conclusion to the international climate change talks in Durban, writes Fergus Green, a lawyer and policy analyst specialising in climate change.

Canada’s reversal on Kyoto won’t undermine the sense that the Durban climate conference achieved more than many expected, writes Michael Jacobs of Inside Story.

The UN climate change talks begin today in Durban in much the same way they have since 1995 -- with rhetoric about why the world needs to act but virtually no agreement on how or when.