Nick Minchin beats out the likes of Stephen Conroy, a snivelling public servant, a philandering golfer and an Iranian dictator for the coveted Golden Arsehat of 2009. 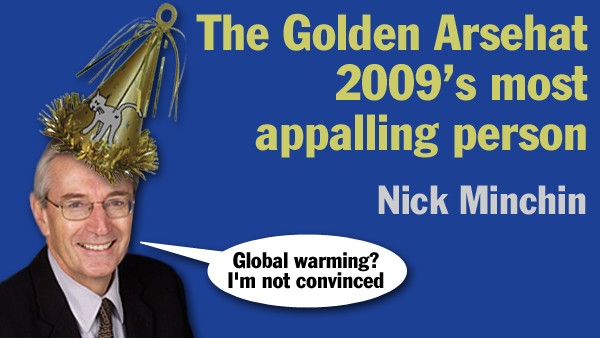 What a standout year for this politician.

When it comes to describing the political tactics and character of the man who almost single-handedly felled mighty Malcolm, ensured the resurrection of the critically ill Right and turned the climate-change landscape on its head, we couldn’t say it better than some of Minchin’s anonymous co-workers:

“He is a master of the dark arts … Nick has played a deeply divisive role, he has suspended all the usual conventions and precedents on how a member of the leadership team should behave. Ultimately Minchin is a liability.”

On the now-infamous Four Corners program that sparked the bloody disembowelment of the federal Liberal Party, Minchin inexplicably granted an interview on the sidelines of his daughter’s netball match. He told Sarah Ferguson, “I frankly strongly object to you know, politicians and others trying to terrify 12-year-old girls that their planet’s about to melt, you know. I mean really it is appalling some of that  sort of behaviour.”

Nick might be doing it for the kids, but it seems Crikey readers fall more in the fruit-loop camp when it comes to their view of Nick’s stance — they bestowed the Golden Arsehat upon him for:

“… his single-minded efforts to undermine good governance in Australia and damage our reputation as a global citizen.

And so, good sir, you can now claim the dubious distinction of overwhelmingly beating out the likes of Stephen Conroy, a snivelling public servant, a philandering golfer and an Iranian dictator for the coveted Golden Arsehat of 2009. 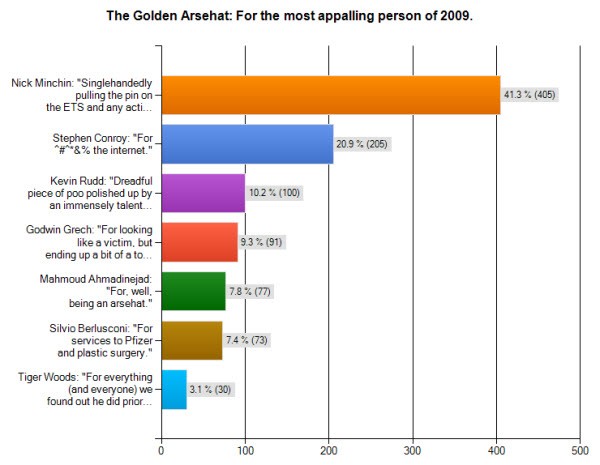 I’d like to be around when his daughter explains to her daughter what big-daddy did to save billions from war, hunger and death. I’m sure the plucky little thing will be appalled and terrified too.

That’s a bit uncalled for John.

Minchin is an Anglicization of Meanchin.

When Vivian Alvarez was found to have been illegally deported and left to die I asked Minchin in public about this deportation of “an Australian woman”.

He looked at me blankly for seconds and then said “oh you mean the filipina”.