Egomaniac. Fuck up. Icon. Crikey readers have chosen Malcolm Turnbulll as their Person of the Year for 2009 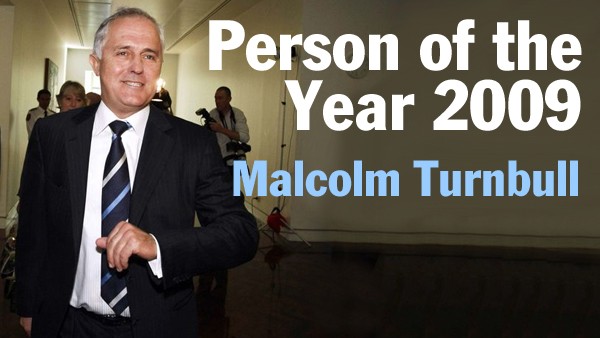 Although we’re mindful of adding to his already substantial ego, we must reluctantly further enlarge Malcolm Turnbull’s head by naming him Crikey’s Readers’ Choice Person of the Year.

As one reader put it:

“We saw Good Mal and Bad Mal this year. Bad Mal — the debt and deficit arguments, the Grech business — was disingenuous and cavalier. Good Mal — the man who went down fighting — was eloquent, articulate, passionate and compelling. The contrasts between Good Mal and Bad Mal and between Good Mal and every other politician in Canberra was uncomfortably stark. Too often in politics we barrack for someone because we despise the other side. From time to time, though, we barrack for someone because we want them to win. Good Mal — the Mal released from the constraints of adversarial party politics that created Bad Mal — was someone that I wanted to see win.”

Yes, Turnbull doesn’t need any help blowing his own trumpet (see The Times UK) but readers have overwhelmingly tipped their hats to the newly minted backbencher: “For standing up for what he believes in (a rare thing in politics) and charging fearlessly into the Valley of Death — his last hours were his finest.”

“Malcolm has crashed and burned in the most public way possible, almost tearing his party completely apart in the process. Fascinating. Brilliant. Egomaniac. Flawed. F-ck up. Icon.”

“For fighting the good fight and not backing down. And one of the few to leave the spotlight, dignity remaining.”

“For trying to drag a party of misfits into the 21st century, when he could have spent that 14 months rolling around in his money vault.”

“He tried to humanise the coalition party”

“Let’s face it, would anyone in the commentariat or Twitterverse have survived the year if not for him?”

“The man who won’t say die, and even now after being ousted from the leadership we know he’s still not dead.”

“For guts, backbone and integrity.”

“For spitting the dummy so spectacularly and exposing the Liberal Party as a neo-fascist rump.”

“For not knowing when his colleagues want to push him under a bus.”

“Can’t wait til Kevin Rudd goes all West Wing and appoints him to cabinet.”

“For a brief moment it looked like the Liberals may one day be liberal. Always entertaining, if often unintentionally.”

“… he showed that Liberal and sensible aren’t exclusive ideas. His party martyred him.”

So go towards the light, gentle Malcolm, the Crikey readership salutes you.

Andrew ‘the Bolter’ Bolt is a victim of a changing climate

All the pros and cons of climate change — now, you can decide!

A worthy recipient, unlike this year’s winner of the Nobel peace prize.

Good grief, what did he do? Nothing.

ROTFLMAO
At least Crikey subscribers know how to take the piss.
Malcolm the magnificent merchant banker. 🙂 🙂

Love the jealous right-wingers commenting here – I’m really looking forward to more of Malcolm, and the demise of the One Nation coalition…to be replaced by a more intelligent non-Labor party that doesn’t seek to appeal to cretins like the current one.