Who were our biggest media hogs this year? Kevin Rudd’s dominance of media coverage was slightly less than last year, even if he did come out on top.

Kevin Rudd’s dominance was slightly less than last year, mostly due to the excitement on the benches opposite at the end of the year, but also perhaps due to long stretches overseas and a large amount of silence on what many would have called the only significant (attempted) reform of his first term.

Number two on the list is now a humble backbencher, as are Number six and 19, and Number 13 is retired altogether although they all find themselves in their current positions for vastly different reasons. 2009 did indicate that the three remaining in the game are not as good at politics as they thought they were.

Only four women on the list this year, and no Coalition female MPs, including the Federal Liberal Deputy Leader. It ended up an extremely tough year for the Queensland Premier after a historic win, with plenty of journos willing to predict a different Premier by this time next year. A far more successful year for Julia Gillard and as for Penny Wong, well we all know how her year finished up.

Both the Senate wildcards made the list (in fact all three if you include Barnaby in that definition) although the “media elites” would probably score the South Australian considerably higher on the effectiveness scale than his colleague from Victoria. 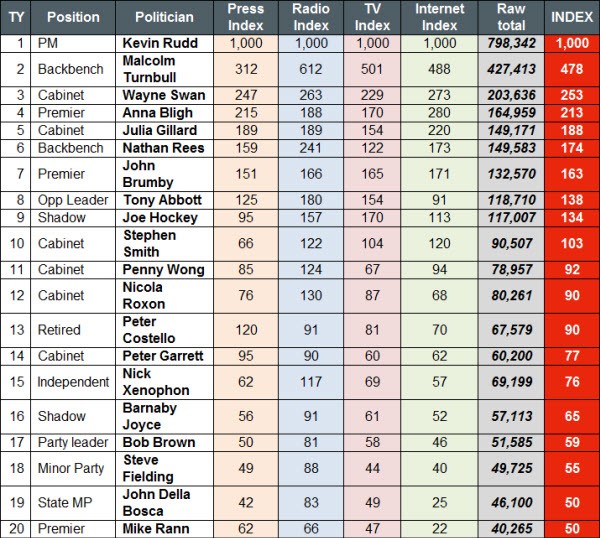 Kevin Rudd totally dominated mentions on talkback as callers never knew quite what to make of the journo/lawyer/banker from Point Piper, but they’re far more certain about the seminarian/law graduate/journo from Forestville.

Continuing with the retired theme, Crikey’s favourite cultural icon would have snaffled sixth place on the list, despite pretty much all of that coverage occurring within a month.