Tips and rumours: No Red for Hey Hey?

That black face loving comedy crew down at Hey Hey are returning to our humble screens next year, but will resident grouch Red Symons also return? Plus, news on the Myer renos.

Rural Press’ “re-education” of Fairfax continues with The Age about to embark on what is known as a “cultural change” program.  Much laughter in the corridors of our new Media House building with  the rumour that CEO Don Churchill  has given responsibility for The Age‘s “change” in “culture” to the same Age management executive who, as reported in Crikey, was evicted from a South Melbourne drinking hole some weeks ago.

A “discussion” of the documentary Are You My Mother filmed for SBS during the reunion of an 18 year-old inter-country adoptee with her birth mother has been removed from the SBS website without explanation. This blog incredibly was unmoderated and a free-for-all ensued over several days eventually resulting in the subject family coming online to defend themselves … Wait for potential fallout.

The redevelopment of Myer Melbourne is now seriously behind schedule, and could run up to a year over by the time it opens in mid to late 2010.

A quick check of Google news will show that through 2007 and as recently as mid 2008 Myer Chief Bernie Brookes was telling various media outlets that the redeveloped store would be completed and fully open by Christmas 2009 (i.e., now). In fact, the company issued media releases confirming the completion date in 2007 and 2008.

While Myer has reopened half of the ground floor of the Bourke Street store (about 10% of the total store), passers-by along the Little Bourke Street construction site can clearly see a gaping hole in the ground where the rest of the six story building should be. For shareholders, the long delay cannot be good news.

In this weekend’s Australian (19/20 Dec), the letters-to-the-editor page contained five letters responding to the internet filter and Labor’s plan to filter out all material refused classification. The three pro-filter letters were written by alleged “citizens”:

These three did not disclose that they were from Christian lobby groups, not only as members, but executive members. 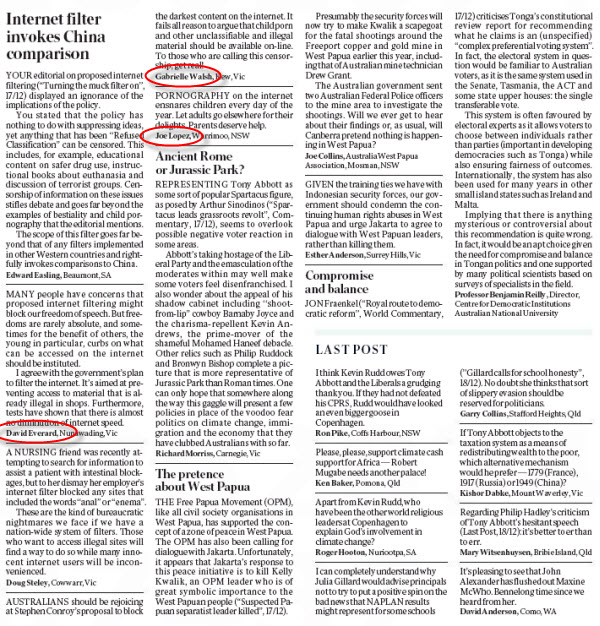