The PM, his wife and the Abigail the dog say cheese for the official Rudd family Christmas card. Jasper the cat had too much self respect to appear...

Where’s the cat? The PM, his wife and the dog say cheese for the family Christmas card. The cat had too much self respect to appear. 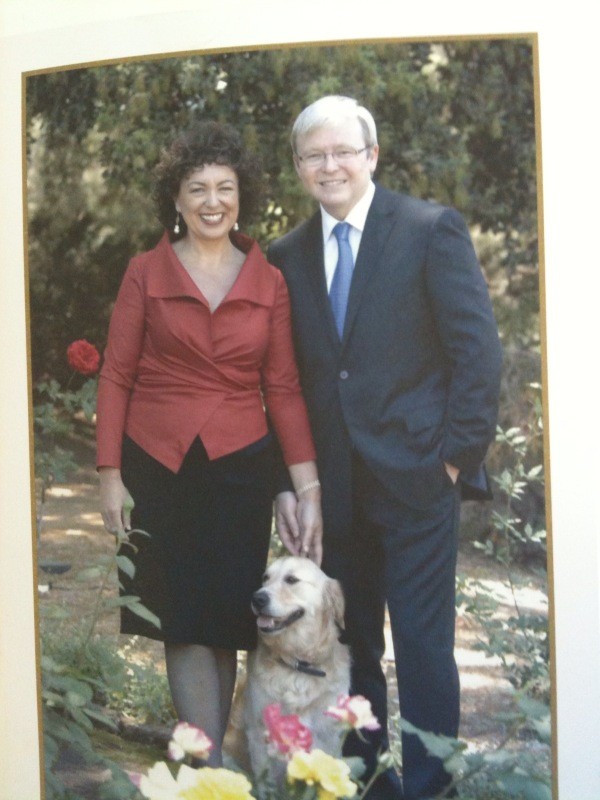 Giving a perspective to the environmental concern of Australians. Sales of new motor vehicle figures released this morning by the Australian Bureau of Statistics suggest that the “think globally, act locally” message has not got through to many people. During November the sales of the gas-guzzling sports utility vehicles reached their equal highest share of the market in history — 21.4%. They certainly are figures that put the willingness of Australians to help curb carbon emissions to halt global warming into some kind of perspective.

Good news for Victoria and SA. Whatever they might say about the future of the environment, the car sales figures will be welcome news in the key manufacturing states of Victoria and South Australia. The automobile industry is clearly coming out of the dip caused by the dreaded global financial crisis. While not yet back to the record highs of two years ago, sales are well and truly on the increase. Political implications of Copenhagen in Australia — Abbott and the Greens clearly winners. At least in the short term, Tony Abbott will be a winner from the inconclusive nature of decisions. It makes the position of those who argued against the need for Australia to legislate on an emissions trading scheme before the round of international talks began seem far more sensible. Kevin Rudd must surely now wonder if it is wise to bring his legislation to the Australian Parliament again before there is the likelihood of other nations doing something similar.

Throughout the Copenhagen talks it appears that the Australian tactic was to stick closely to the positions adopted by the United States. It will be prudent of Prime Minister Rudd to continue with that line. The small minority of extremely concerned environmentalists in Australia will now be in a gnashing of teeth mode that will provide Bob Brown and his Greens with an excellent opportunity to enhance their electoral support. There might not be many such voters but even a couple of per cent will be enough to guarantee that the Greens are the holders of the balance of power in the next Senate.

In the longer term, it is this electoral arithmetic that will determine what Australia finally does about global warming. Those opposed to the modest Rudd model of an emissions trading scheme should remember that before they vote next time.

Crossing the line between news and comment? Two examples this morning of how a word or two can change a straight report into the expression of a clear opinion. This from the Sydney Daily Telegraph: Merry Christmas back in place after Parramatta Council dumps Seasons Greetings signs — Councils have turned their backs on political correctness, reinstating the “Merry Christmas” greeting to its rightful place. (My emphasis). What will Newspoll show? Presumably the Newspoll phone callers were active at the weekend to give The Australian one final reading on the political state of the nation. Crikey readers in the past have been very close to the mark in predicting what the pollster finds. Can we do it again? Please make your prediction in the little poll in the left-hand column of by blog site.

The reason SUV sales were so high was the tax concession for small companies – every tradesman bought a new ute.

No Kevin Rudd’s cat! I’m glad I wasn’t on the list.

Thanks Joe, I was going to suggest the same thing about “SUV” which I think is actually a yankee term. 50% tax concession from memory for business vehicles from utes to prime movers.