The battle between SBS and your very own Crikey has progressed, but sadly is about to be aborted by Crikey agreeing to change the tag for that section of its site that has been (until today) aggregating coverage of soccer under the tag “the world game”.

Crikey! As Steve Irwin was wont to remark. But perhaps he shouldn’t have. Perhaps he was breaching a trademark.

The battle between SBS and your very own Crikey has progressed, but sadly is about to be aborted by Crikey agreeing to change the tag for that section of its site that has been (until today) aggregating coverage of soccer under the tag “the world game”.

Regular readers will remember that the number two national broadcaster issued a legal threat to Crikey earlier this month, claiming that the use of the tag “the world game” was a breach of its trademark. SBS had registered the phrase, together with various logos, to market merchandise, advertising inventory and the like, and had an application underway to register the mere phrase.

Crikey wrote back denying it had breached a trademark. “The world game” it asserted, was a phrase in common use, and Crikey was not trading on it, merely using it as a tag for content.

Now SBS has responded with a long letter which asserts, among other things, that Crikey is selling First Dog on the Moon socks and t-towels by trading off “the world game”: 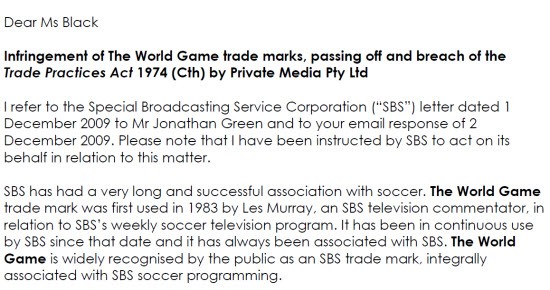 Well, Crikey is throwing in the towel. Editor Sophie Black said this morning that there wasn’t enough money in the budget to fight SBS, and therefore the tag would be taken down.

But she still thinks that SBS’s claim is ridiculous, and that if Crikey opposed its registration of the bare phrase, it would have a good chance of success.

In response to SBS’s claim that Private Media Partners’ wouldn’t like it if its registered trademark “Crikey” were used on SBS’s web sites as tag for content, Black asserts “we wouldn’t mind at all”.

SBS misunderstands the way online works, she claims. A tag is not a trademark, but a mere use of a phrase. And soccer followers get cross if the word “soccer” is used rather than “football”. And use of the word “football” just causes confusion in the Australian context.

And to top it all, Black points out that there is in fact already another subscription email with the name Crikey. It is the publication of the Irwin family’s Australia Zoo.  If Crikey were like SBS, it would protest, she says, but: “I think they are playing to a rather different audience. We are probably safe there.”

As for The Content Makers, before it was a blog at Crikey, it was a book by me published by Penguin. No legal correspondence has been received from Penguin. And we even used the same colours. Crikey.

SBS wish to advise that you are breaching our copyright by using any of the letters ‘S’ and ‘B’ and any double ‘SS’ or combinations thereof. These are SBS property and may not be used by Crikey.

From now on, your editor is to be referred to as Ophie Lack. Your chief correspondent will be Ernard Keane.

Readers will need to pay for their Crikey ucription to enjoy Firt Dog On The Moon, not to mention your features sections: Politc, Media, Environment, Uine and Log.

Hopefully Crikey will pull a TISM and rename the tag “Censored Due To Legal Advice”. Not as catchy as the disputed phrase, but it does avoid confusion about “football/soccer” etc.

Yeah, it’s wrong. I have a little experience as a trademarks examiner for the federal govt way back in 1987 as a base grade examiner for 6 months.

Terms of general descriptive nature (World Game) in the context of the specific service or product (media coverage of soccer) in business are not allowed as trademarks.

Notice it get’s a little complex. You can have say theoretically a tm “soccer” for perfume. Or a soccer ball with the tm “perfume” because there is no natural descriptive usage of those words for those goods or services in context. You could have The World Game as tm for selling perfume or bicycles or (perhaps) pop music (if not about soccer?), or hats, or stuff not associated with … the World Game of soccer! But you can’t have a tm World Game about the world game.

When I did the job a base grade would examine it, and a supervisor would check it. I think someone should get their *rse kicked it got this far.

Clearly “The World Game” has descriptive content and to bar other competitors (!) in the market from general usage is a demonstrable restraint of trade. Note that “restraint of trade” aspect. This is where federal MP/ministerial action is warranted beyond the budget of a SME business like Crikey or even SBS for that matter.

It doesn’t matter if SBS (arguably) invented the usage if it has natural descriptive meaning to the product or service involved.

Restraint of trade is a matter for … The Productivity Commission? And the ACCC?

The SBS line about deceptive similarity is misconceived if it never should have got on the register to begin with for any product associated with soccer. It’s an old corporate lurk to get a tm that squeezes out your rivals and intellectually corrupt too.

My favourite is a cheap black and white made in China sports bag I bought some years ago, with the simple brand name: “SPORT”. Something about the modesty of the proprietors in regard to their English proficiency charmed me. I just had to buy it.