Quadrant has had its Australia Council Grant cut by $15,000 and is screaming blue murder and about the fix being in, because every left wing magazine –- Overland, Meanjin(!), Australian Book Review (!!) -- has seen its funding maintained or bumped up.

Wow – just how much Christmas spirit does one man have? I’m talking of Keith Windschuttle whose bizarre and elementary stuff-up of an attack on the Rabbit-Proof Fence was our pre-christmas turkey for the year.

Just as we were digesting this, a friend who receives Quadrant (ed K Windschuttle) received a letter with the latest issue — the gist being that Quadders has had its Australia Council Grant cut by $15,000, from $50,000 to $35,000, is screaming blue murder and about the fix being in, and wants your money: 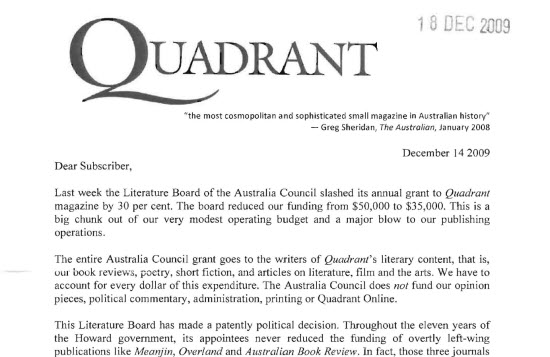 The fix? Keef’s argument is that every left wing magazine – Overland, Meanjin(!), Australian Book Review (!!) – has seen its funding maintained or bumped up, while Q has taken a cut.

Two things are interesting here – the first is that Quadrant‘s funding was at around the $30,000 level until a couple of years ago, when it suddenly got a bump up. By an incredible coincidence this coincided with the arrival as Literature Board chair of Imre Shaluzsinzsky, postmodern literary theorist turned free-marketeer and also – mirabile dictu – a member of the advisory board of erm, Quadrant. During Szaluszinshky’s term, Quadrant‘s funding got a substantial boost, and has now returned to normal levels.

The lower grant reflected the fact that Quadrant carried less short stories overall than the other magazine, and that about a third of its poetry was, to put it bluntly, hobbyist doggerel. It also has the same names cropping up again and again, one or two of whom write in the mag’s non-subsidised mad ranting essays section – which deliberately or otherwise gives something amounting to a cross-subsidy. The assessment report of the Oz Council Board report had this to say about no-one in particular:

“The Board continues to encourage literary magazines to publish a broad range of writers and was a little concerned that some magazines draw from a very narrow field of contributors.”

But the even funnier thing about Windschuttle’s letter is that, since the departure of Robert Manne from the editor’s chair, Quadrant has made its economics firmly neoliberal, and come down hard on the whole notion of subsidised culture at all. Here’s Michael O’Connor, Quadrant‘s online editor, in a ringing jeremiad (about 65% of which I agree with)on cultural policy and funding:

“Whitlamesque pork-barrelling of the arts obtains the artists’ vote (of minor importance) and their amplified voices (of incalculable benefit). Public money flows to culture, and its associated artists and carpetbaggers, from all levels of government—local councils, state governments and federal governments. Even individual government departments give away money and undermine the workings of a free market.”

Those damn carpetbaggers, hey? Next thing you know, they’ll be sending begging letters because a government department is undermining them, free-market wise, 30% less than they did last year.

O’Connor’s remark is simply the last in a long string of comments by Quadrant writers about the corrupting effect of grants – on one memorable occasion the remark in a PP McGuinness editorial hovered above the notice all grant recipients are required to publish: ‘Quadrant gratefully acknowledges the assistance of the Australia Council’.

Such hypocrisy is general on the right, from Szhazulszinzky’s discovery of free-market principles after he left the public university system, to Michael Duffy’s ceaseless tirades against the ‘middle-class welfare’ of the ABC – at about the time he took an Ozco grant for his publisher Duffy and Snellgrove (initially home of the excellent Graeme Robb, a Malvern Rd perennial if ever there was one), then expensively pulped and republished a libelous book about Bob Ellis that no-one had bothered to fact-check, before D and S went belly-up altogether. Now, Duffy works at the ABC.

Christopher Pearson’s Adelaide Review was another doozy – despite getting Australia Council funding to pay contributors, many of us remained unpaid for 7-8 months – which suggests that Pearson was using the payment to keep the paper and himself afloat (in pinot noir, in Pearson’s case). The backpay was only made when the paper was sold to a Spanish publisher, the Australia Council thus having helped John Howard’s speechwriter develop a saleable commodity.

The troubles Quadders has with Ozco funding might suggest that they would have an easier time returning to the CIA as their main funding source. But wait – in Cassadnra Pybus’s The Devil and James McAuley, we learn that the Congress for Cultural Freedom (the irony-free CIA front set up to pay for magazines like Encounter and Quadrant) repeatedly warned the magazine’s early editors that it was too politically strident, and not publishing enough of genuine cultural worth.

Got that? Even the CIA thought Quadrant didn’t publish enough good poetry.

Gosh oh golly oh wow. The turkeys keep on coming. This will last us all the way to Thanksgiving.

Let the much vaunted, Sainted Invisible Hand of the Free Market rule – as Mudorch claims to believe, punters are happy to pay for quality.

His name is Imre Salusinszky.

Who was the one complaining “that no-one had bothered to fact-check”?

And don’t even try and claim this was humour.