From a tough field of nominees, this year's Wankiest of all Wankleys goes to Richard Wilkins and his Goldblum gaff, writes Elly Keating, but Sam the Koala, Daryl Somers and Kyle Sandilands all deserve honourable mentions.

This year has provided Crikey with a rich and plentiful array of Wankley material. From over-eager TV news reporters, to comic sketches in bad taste, and product placement pitfalls, we have seen it all this year.

But, alas, there must be a winner.

And so we give to you: nominees for the Most Wankiest of Wankleys for 2009

The first nominee goes to the country’s (and the world’s) love affair with Sam the koala during the bushfires that raged through Victoria at the beginning of the year. The heart strings of many were pulled on by the now iconic picture, which graced the cover of many newspapers: 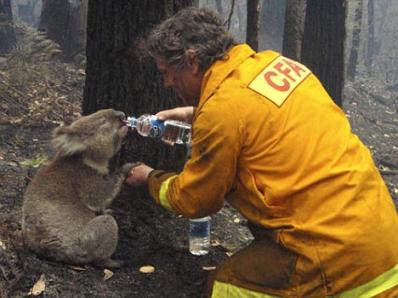 But all was not as it seemed when it came to this cute, thirsty koala. We were told that the picture was taken at the height of the Black Saturday bushfires. Not true. It was in fact taken days before the devastating fires broke out.

This fact didn’t detract from the pain and sadness felt by many (and by many we mean the media) when Sam passed away. Even our political leaders joined in the national mourning. Malcolm Turnbull went as far as to suggest the building of a statue to honour Sam. Yes, we know.

Richard Wilkins earned a very special place in all our hearts one morning in June. You see, Richard is very up to date with all the latest on new media and social networking. So when he heard reports of rumours on Twitter that Jeff Goldblum had died in New Zealand, he just had to share the news with the world. On the Today show.

But as the news came out that in fact Wilkins was mistaken (thanks @KevinSpacey), it was poor Karl Stefanovic who did Wilkins’ backpeddalling for him.

The omnipresent Daryl Somers (which TV channel does he work for again?) received a Wankley in October for not letting a bit of blackface controversy get in the way of spruiking Hey Hey’s rating triumph.

Here he is in an interview with a Sky News reporter outside Sam Chisolm’s 70th birthday party on October 9:

I am actually in shock because of the ratings figures. All the other stuff … controversy … that’s all gone in my mind. We dealt with that last night with Harry who obviously took offence at the act … the Jackson Jive …  no offence was ever intended by the guys who did the act and certainly not the show.

Look if there were any Australians who were offended I certainly apologise on behalf of the show and certainly the Jackson Jive apologise … but look it’s you guys that are gonna run this over a few days and get mileage out of it. For most of Australians I think its a storm in a teacup.

Not to diminish this … but I’m very excited at the ratings of the show. And I’m sorry to Channel Ten.

Vile Kyle and Tacky Jackie will forever be associated with the event for which they were awarded a Wankley in July. We all know the story of their lie-detector scandal so well now that there really is no need to repeat it here.

The slap-on-the-wrist type punishment for 2Day FM from ACMA for this incident has been reported on Crikey. That 2Day FM told ACMA the incident represented an “inadvertent” breach of regulatory codes highlights just how little responsibility has been taken.

And an honorary Wankley nomination for Karl Stefanovic:

On the morning after the Logies, Today host Karl Stefanovic was feeling just a tad tired and emotional.

Note to Karl: Just because you didn’t FEEL drunk, doesn’t mean that you weren’t.

And the winner is …

At this point we will throw to Stephen Colbert, whose special report on The Colbert Report is priceless.

We couldn’t have said it better ourselves.

Nuclear Power is your friend!

Sam the Koala is a worthy winner, BUT the main reason has been omitted: Sam was burned during a “controlled burn”, not a bushfire. The perpetrators knew full well they’d kill any koalas who were in the area, and many other animals besides. So-called controlled burning is a largely pointless exercise, wrongly believed to significantly reduce wildfire risk.

sorry that should read a worthy nominee…

“Just because you didn’t FEEL drunk, doesn’t mean that you weren’t”. Well, personally I think Stefanovic’s behaviour looks more like light-headedness because of sleep deprivation. The whole media assumption that it has to be intoxication is deserving of its own Wankley.