An open letter on behalf of drought-affected farmers 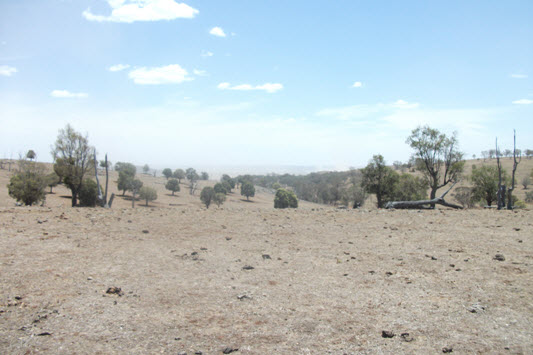 Re: Drought in Central West NSW

Deep concern and disappointment is the catalyst which has prompted me to write to you today.  As I look around at my farm and my friends, our future is quite literally blowing in the wind, and that wind is heading for your office in Canberra. I am only one of many farmers (and other community members) in our area, hurting from extreme weather conditions, and we are collectively asking for your help.

Over the past 12 months, the Commonwealth Government has indicated that it wants to change the way it delivers drought assistance, or in other words, to reduce government support to this area to eliminate the prospect of drought subsidies going on perpetually into the future.  Back in May this year, the ‘Productivity Commission’ responded to a request by Government (economic report) to “Identify the most appropriate way for governments to assist farmers to improve their self-reliance/preparedness for drought events” (find a better way so government can discontinue drought support). I guess the concept had potential, but the timing failed when our drought “recovery period” was terminated by dry weather in its infancy.

Farms and farmers need assistance now. The dry period we are experiencing is extreme and is in some part the result of climate change —  something we apparently have no control over. Farmers are hurting as small business managers, as environmental custodians, and as individuals.  In their visit to the Central West area in February this year, NRAC failed to accurately assess not the pasture (which was fairly abundant at the time), but the poignant and less obvious signs of drought: depleted fodder reserves, exhausted soils, stretched bank accounts and rising levels of depression.  This oversight, which was derived from a pre-existing change of government policy, has plunged farms and surrounding communities into decline.  Also, the volumes of rain needed to produce feed during these next few hot months are historically impossible, so stock feed production or sowing of crops from now to Autumn is unrealistic, and over a large area — a very important point.

The photo in this letter were taken at 2pm today — we have at least another three hot months of this heartbreak and cost in front of us … how will people survive this?

The rainfall figures here at Gundooee tally 325mm for the year, which is half the average annual rainfall.  The effective annual rainfall is far less than that, as most of the rain fell in the height of winter and summer when grasses respond poorly, and much of the other rainfall was sporadic and ineffectual. I believe our effective annual rainfall to be about 100mm for this year. This would not have been so unmanageable, had we not been coming out of a five-year dry time.

Earlier this year, our farm had to take out a further loan of $80,000 with the NAB to cover our $100,000 feed and agistment bill (for 2009).  The gross annual income for the farm peaks at $200,000 per annum, so after removing the drought costs and interest repayments, the residual funds available for running the farm and family were never going to be enough. We run at 70% equity which is traditionally a safe margin, but the problem this year has been the depleted reserves of fodder and money — the real difficulty is not having that buffer to fall back on.

This letter is a request for you to:

Thank you for taking the time to read this letter, and I look forward to your response, not just to acknowledge the letter, but a response that gives us all hope.

Open the floodgates: get ready for another fight about water

I am not a famer but I live close to the land and have been involved in many disucssions about the farming situation. I believe that now is the time to stop drought assistance for ever. Instead, landholders should be assisted in drawing up farmplans that are far more realistic under the circumstances, with family maintenance available until the end of the process. Public money should then be available to implement the revised (environmentally realistic, ecologically sustainable) plan to put the land on a better productive footing. If that cannot be achieved then the landholders should be paid to leave. Unless our meagre finances are used to put the country on a better footing to deal with permanent climate change then we are wasting it.

Interesting proposition DJH. But give a bit of a suggestion what you mean by:
” If that cannot be achieved then the landholders should be paid to leave.” Do you mean the Commonwealth should buy out the debt at the bank and take over the property while paying the ex-farmer some sort of lump sum or a pension? Who actually do you see as ‘managing’ the emptied property and who should ‘own’ it? And if better times return – ie. lesser times but better than now, should someone farm the land or do you see it as emptied forever and no longer managed? Because while this might sound like a clean and neat method of making a problem go away it actually includes creating a brand new and possibly less sustainable challenge.

Well said, Rob. But refer to Item 10, by Bernard Keane, in today’s Crikey. It specifically refers to writing letters to Ministers and MPs. Sadly, no considered response will be forthcoming.

Pasture and crop growth depends on soil moisture, and a lot of things affect that beyond just crude rainfall aggregates. Is the undoubted dryness in the central west more affected by increasing temperature and evaporation?

I would be very interested in the opinion of an expert in soil and pasture management in relation to the farm, Gundooee, and its management during the past several years.

If it is reasonable to support farmers through drought periods via loans and low interest rates, then it is equally reasonable for these same farmers to develop and stick to a farm management plan which has been appraised by experts.

Perhaps such accredited farm management plans should be a condition of at least some of the Commonwealth and State aid. If no such plan can be developed, then I agree with the first contributor – look for ways to support the uneconomic farmer to leave the land and arrange for the land thus left to be used less intensively under the best plan which can be developed.