A tick for the Treasurer

Latest figures from the ABS show that Treasurer Wayne Swan got it right by refusing to cut down on the stimulus package three months ago. Plus, a second airport for Sydney? Ha!

The Treasurer gets it right. The lower growth than the business economists expected revealed in this morning’s September quarter gross domestic product figures from the Australian Bureau of Statistics show that Treasurer Wayne Swan got it right when he refused to reduce his government’s economic stimulus spending three months ago. A major factor in Australia recording even a 0.2 percent growth for the quarter was the effect of the government spending on schools. Without that spending and an increase in inventories things would be back in the negative. 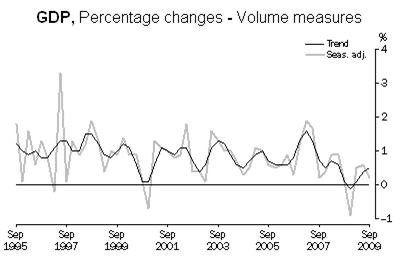 A plug for a stablemate. A measured and fascinating account of the toppling of Malcolm Turnbull written by Mark Westfield, the press secretary during the former Opposition Leader’s dying days, on the Business Spectator website this morning. Because the author would actually have seen it, we can believe the claim that internal Liberal polling indicates that the Liberal Party could lose up to 20 seats. Although, says Westfield, 10 is probably more realistic, in the event that the Opposition and minor parties again reject the emissions trading scheme legislation in the Senate in February and the Rudd Labor government calls a double dissolution election on the issue of climate change.

Topless flasher mown down by car. Alright I admit it. It’s very sexist but I can’t resist this contribution to the law and order stories of the day: 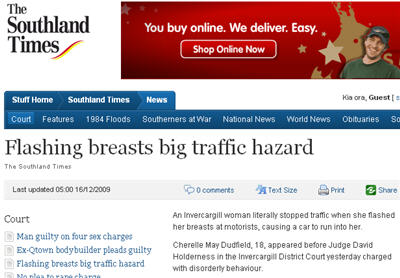 You have got to laugh. Sydney has been getting a second airport for as long as the 40 plus years I have been covering politics in Canberra, so I was delighted to read this morning that this courageous Labor Government has grasped the nettle and agreed to hold another inquiry to determine where would be a suitable locati0n for a new lot of residents to be troubled by aircraft noise. Badgery’s Creek, where previous governments had actually purchased the necessary land, is no longer suitable because of the proximity of good Labor voting people to what would be a second airport’s approach path. Consistent with the approach of his many predecessors with responsibility for this decision making, Transport Minister Anthony Albanese has shown that he too believes in not putting off until tomorrow what can be left to the day after.

An unlikely electoral friend. Lumumba Stanislaus Di-Aping, the Sudanese spokesman of the Group of 77 and China at the Copenhagen conference, will prove to be a wonderful ally for Kevin Rudd when the next Australian election comes. Mr Di-Aping did not have our election in mind when he described Mr Rudd overnight as lying to the Australian people about his position on climate change. He thought he was launching a stinging attack that would shock Australia into being more co-operative but the reality is that being criticised for selfishly following Australia’s own interests will come in quite handy when Tony Abbott goes on the warpath during the coming campaign.