Tony Abbott has been channelling Prince Philip and some of Australia's most successful Opposition leaders in an effort to bran himself as a champion of the environment.

Well done to The Australian today for its scoop in bringing us Tony Abbott’s speech to the Millennium Forum.  Although given it operates as the Liberal Party’s house newsletter, it’d be a worry if they didn’t get first dibs.

Dennis Shanahan got so excited by the speech he compared Abbott to Churchill.  “In Britain’s darkest hour Churchill wanted to defend the British Isles on the beaches and everywhere else,” Dennis told us, helpfully.  There’s always something to be learnt from reading The Oz.

And Matt Franklin liked Abbott’s line about an election “Bring it on. We will be ready for you.”

About as ready as you can be without any policies or money, but you get the picture.

The phrase “bring it on” — sadly, my preferred version, the more Americanised and efficient “bring it” is yet to invade Australian political parlance — has a particular resonance for Opposition leaders.  Yes, Abbott has been recycling.  Maybe it’s the cheery fake aggression and “rally the troops” tone that makes it so appealing.  It was Simon Crean in May 2002 who declared

I say once again. If the Prime Minister wants to conduct an election over making it easier to sack people: bring it on; make my day!

OK, so that’s more Clint Eastwood than Winston Churchill, although judging by his early movies, Eastwood did more to win WW2 than Winston.

Malcolm Turnbull also urged the government to “bring it on” earlier this year, the “it” being a full inquiry into the Godwin Grech business. He may have been influenced by Anthony Albanese demanding that Turnbull himself  “bring it on” in Parliament the Monday after the affair exploded.

It’s not just in recycling that Abbott is showing his green credentials. This morning he was telling the ABC’s Lyndal Curtis about his desire to change the fact that the environmental vote tends to go parties of the Left rather than the Right.

It hasn’t been the case in recent years, but I think that this is something that we should try to change. Certainly if you go back a couple of decades you had Prince Philip, no less a person than Prince Philip who I think was the inaugural president or patron at one of the big international environmental organisations.

Abbott has a good point.  There’s no reason why conservatives should not be good conservationists.  There’s no inherent conflict between the two ideologies, indeed some complementarity.  But Abbott’s monarchism seems to have got the better of him.  Prince Philip an environmentalist? Hmmm.  Let’s check the pictorial record. 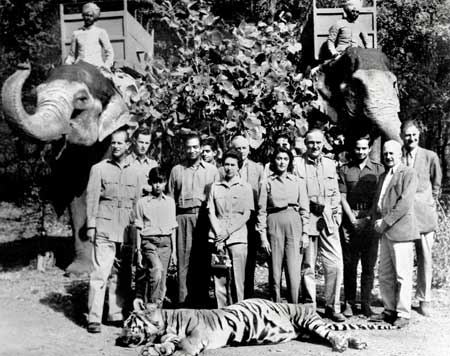 That’s Philip, president of the World Wildlife Fund, on the left, looking after a tiger who’s so tired he’s having a bit of a lie down.  It also looks like the royal party was joined by Q from the Bond films, fourth from right. “Now pay attention, Your Highness …”

Only a week till Christmas relieves us of the chore of listening to politicians for a month.

As a practising ‘conservative conservationist’ I agree that the libs should be far more willing to embrace environmental issues.

The highest level of environmental volunteerism is overwhelmingly located in leafy liberal seats- Tony’s seat would have to have the highest level in the country. Take a walk though any of Sydneys North Shore bushland areas and you are bound to find dozens of little old ladies doing battle with lantana.

Membership to most environment groups (like WWF, Wilderness Society, National Parks Associations etc) are equally split between the ‘latte belt inner suburbs’ and the conservative leafy ones.

These are the constituents that Abbott is clearly worried he will lose. Thats the problem with his ETS strategy. With its undeniable hints of climate denialism he might have to trade the North Sydney’s for the Penrith’s. He better hope that in Penrith the ETS has better cut through than Workchoices.

I heard Mr Abbott on the ‘climate change’ challenge in his speech and interviews thereafter.
His need to diminish and insult PM Rudd’s efforts delineates a total lack of understanding of the issues, the problem and what is needed for survival.
He tries to bring the whole thing down to being a good environmentalist, comparing himself to some famous ones and presuming he can make all moral and decent Aussies good environmentalists doing all that can be done individually for reducing emissions voluntarily as there’s a long list of these things which really do cut emissions.

Well, if all Aussies were max in this goodness and did it all individually it would make their emissions less but have no effect on the global problem.
Unless the world saves itself Australia will go down in the damage no matter how good Australians are at there own actions to reduce emissions. All that effort would be in vain.

PM Rudd gets flack from the Rhodes Scholar for trying to get the world to save the planet and Australia while the Rhodes Scholar says he’ll just stay at home and be a perfect environmentalist instead of pretending to be the ‘prime minister’ of the world.

The experts say that if Australia alone had the ETS happening it would affect the worlds emissions positively because that’s the difference between simple good emissions reduction efforts and the effect of a complex ETS which has complex, penetrating and far reaching influences on many parts of, people of and governments of the world whoever may be ‘prime minister of the world’.

Whatever a Rhodes scholarship means it obviously doesn’t grant wisdom.

Seemingly the same can be said of a Doctoral Degree.

As Rundle has often pointed out when discussing mad Minchin’s mewling, the old Left was all for industrial development. It was the backwoods tory squires, underworked clerics and 3rd or subsequent sons of the manor who wrote of the idylls of fox hunting. The roles changed in the last 30 odd years as the 1st sons succumbed to thatcerhism and ripped out the hedgerows to create Home County prairies (with which the weather then played silly buggers by creating crop circles for the ferals and assorted urbanoids who’d decided they were greenish.
Plus ca change

Err #1 Abbott was promoting Prince Charles if memory serves, who is seriously green, not Prince Phillip?
…………..
Err #2 , Abbott is no environmentalist. Only fools (voters?) would be misled by his brazen rhetoric.

The woodchipping of wet old forests (which just promotes bushfire by promoting dry schlerophyll regrowth) reached a record of some 6 to 8 million tonnes per annum under Howard to 2007, and has only retreated with the GFC but still say 5 mill (?).

Howard made the same pitch in the Dandenong Ranges in 1996 federal election with the $1B Natural Heritage Trust fund out of the sale of Telstra (to smash a stronghold of unionism – real ideological malice there). The Howard pitch only resonated because Keating had/has asphalt in his veins (hence Keneally as his new proxy in NSW?).

Abbott’s GreenCorp was about neutralising the natural tendency of youth to join up to such things as the ‘Jabiluka express’ protest movement which helped overturn the expansion of the Ranger Uranium Mine into Jabiluka in 1997-8. Funny how this achievement is constantly airbrushed from Australia’s real political history (tsk tsk Fran Kelly doco).

Speaking of which Gareth Evans on 7.30 last night has about as much cred on nuke energy as he does on the land mine ‘it will never happen’ treaty. Evans said it would never happen. Wrong. Jaded. Cynical. Stupid. Has been. Crisis voyeur. Other than that I like him.