The housing bubble continues to inflate in earnest, as the last major weekend of the auction season delivered a spate of booming prices. Can it continue?

The housing bubble continues to inflate in earnest, as the last major weekend of the auction season delivered a spate of booming prices. Almost $1 billion worth of residential property changed hands on Saturday in Melbourne alone.

While property bulls continue to blame a shortage of supply for the price rises, some of the recent increases belay any sort of “supply based” explanation. The Sunday Age reported yesterday that a one-bedroom property in Malvern East sold for $374,000 yesterday. It sold for $221,000 one year earlier, and the vendors spent $30,000 improving the property. In one year, the price effectively rose by 50%. Another Melbourne bayside property was reported as selling for $600,000 — an increase of 27% in 18 months.

The usual property spruikers buoyed by the results and were as usual, liberally quoted by grateful media outlets. Real Estate Institute of Victoria boss Enzo Raimondo told the Financial Review that “demand for residential property is proving to be very strong … this demand is being driven by a couple of factors — a healthy economy, high confidence levels and a population that is growing by 1700 per week.”

If a global stockmarket crash and worldwide credit market freeze only dents Melbourne property prices by 3.8 per cent, as it did in 2008-09, it’s hard to think of any other scenario which would break house prices … Continued 25-basis point rate rises in 2010 may restrain over-exuberant price growth, but they won’t kill the market.

BIS Shrapnel, which masquerades as an expert property research house, continued the theme with its chief economist, Frank Gelber, telling the Sunday Age:

Every time the market wanted to break out, something stopped it … interest rate rises, the financial crisis — prices started to rise and then they were stopped again …

Now there’s nothing to stop it. The trouble with keeping a lid on a pressure cooker is that when it comes out it comes out really strongly.

What property bulls appear to forget (apart from ignoring the inconvenient truth that supply problems are actually not backed by data is that even after the recent rises, interest rates remain at historically low levels. Rismark boss Chris Joye produced this fascinating graph for his Business Spectator blog last week indicating the link between interest rates, house prices and median incomes. 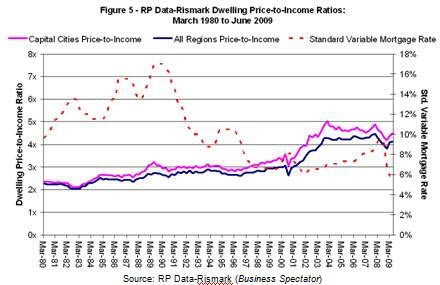 While we disagree on the current price-to-income ratio, Joye’s graph is a timely reminder of the critical importance of interest rates in housing prices. Remember, the graph provides a comparison of interest rates and income-adjusted house prices (not raw house prices, which would show a far steeper line). Historically, the ratio of prices to disposable household income averaged about 3x in Australia — since 2000 (about the time the credit induced housing bubble started) that ratio rose substantially (falling only briefly in 2008 as rates rose to about 9%). That means people are not only paying more for property in raw terms, but they are paying a far greater proportion of their income to housing. That may not be such a problem when interest rates are low, but if rates rise, the interest burden for many, especially young buyers, would be crippling.

Even more worrying is the price appreciation in capital cities. Australian Property Monitors told the Financial Review that median house prices rose to $501,000 in the September quarter (it is likely that that figure represented the median price for capital cities). The most recent ABS data (see page 31) suggests that the average capital city income is $95 000 per year.

Using RBA data, averages taxes paid is equal to about 13.3% of income. Converting the RBA’s mean income figure to a “disposable” figure, capital city household disposable income is approximately is $82,400. This gives a ratio of property prices being 6.1x household disposable income — about double the historical average (and also approximately double the ratio of the United States, which recently experienced a housing bust). Moreover, the average income figure is boosted by extreme earnings; using a median income data, the capital city price-disposable household income ratio is 7.8x.

So while the experts continue to talk of booming property prices caused by a shortage of supply — that ignores the fact that prices have grown at a far greater rate than income, rentals or inflation. The predominant reason for rapidly appreciating house prices is an environment of prevailing low interest rates and the banks continued willingness to fund over-priced acquisitions. This has been fuelled by a continued influx of overseas capital partially backed by federal government funding guarantees.

Property experts and the media continue to report why “this time it’s different” — the only problem is, the eventual result will inevitably be the same.

Bubble, or no bubble: that is the question

The good thing about being a bear is you can be wrong for so many years but when the business cycle turns (which it does every so often) you can say “I told you so!”

@Scott – Totally agree. This harping about the house price crash is getting old. Steve Keen has been proven wrong, yet he then somehow changed the ‘terms’ of his deal with Rory Robertson to extend all the way until around 2025 – house prices will collapse sometime between now and then? Wow…

A simple example: It is going to rain. I can guarantee you that this weather is incorrect and there is something wrong. The creek near my house has run dry, so all that water has gone into the atmosphere and I can assure you what goes up will come down, so it is going to rain.

Never mind the fact it’s summer, I can sit here and tell everyone it is going to rain.

Then, when it does (next year in July), I can sit back and say I told you it would rain!

The thing is by that stage, nobody remembers who you are or even cares, they have gotten on with their life.

Adam: you got it right about BIS Shrapnel:

‘ BIS Shrapnel, which masquerades as an expert property research house….’

Much of their property data in recet years has been woefully innaccurate, and developer oriented.

Nice piece though…the real estate sector in this country is woefully under supplied with decent data.

In NSW, the Real Estate Institute isn’t quoted anymore in mainstream media since it was revealed that their rental property data was pure bunkum….not even close to market reality.