We have to go back more than 100 years to find the last time that the Labor Party in New South Wales polled less than 30% of the primary vote, right back when the part was in its infancy.

Hardly a ringing endorsement for Liberals. We have to go back more than 100 years to find the last time that the Labor Party in New South Wales polled less than 30% of the primary vote. In 1904, when the Party was still in its infancy, it managed just 23.3% and since then the share has never fallen below 30%. Until now, it seems.

The Newspoll published in The Australian this morning presents a very grim picture — a primary vote of just 26%. When the two party preferred vote is calculated the figure rises to a still disastrous 41%. 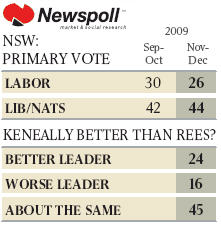 Yet the Liberals can hardly be pleased with their own performance. While the Government clearly is on the nose there is not much enthusiasm for the Opposition with the Liberal primary vote on Newspoll just 39% with the Nationals on 5%. The big gainers have been the Greens and other minor parties.

The silent Health shadow. Still not a peep out of the shadow Health Minister despite more ammunition in this morning’s papers on which the Government could be attacked. Not to put too fine a point on it, Peter Dutton is a dud. That Joe Hockey seriously considered the former policeman was suitable to be a deputy leader of a Liberal Party led by him just shows that he’s not much chop either.

This morning’s potential embarrassments for the Federal Government on the health front are a shortage of domiciliary care for hundreds of frail patients in Adelaide and a looming shortage of capacity in public hospitals to train the number of people about to graduate as doctors.

Not a promising start. My Crikey colleagues seem to think that Essential Research is a pollster of repute so I note with interest that Tony Abbott has not had an inspired start as Opposition Leader. He in fact has the rare distinction of starting off in the job with more people disapproving of him than approving. And when it comes to overall voting intention this internet based pollster has Labor comfortably in front.

The only glimmer of good news I could see for the Opposition was the steady decline ER has been showing over the last couple of months in the standing of the Prime Minister.

Poll Bludger: the pollster skewing towards the Coalition is not what you think