Time for the Libs to exploit the government on health

Are the Liberals finally basing their attacks on the Rudd Government around health policy after months of missing out on the opportunity? Even just a look at the last week of reporting shows rich pickings.

Liberals at last seeing the light about health as their election issue? I have been puzzled for months now why the Liberals have not been basing their attacks on the Rudd government around health policy. It is, as I have written several times in Crikey, (see here) one of those glorious issues on which an Opposition cannot lose.

The evidence of things going wrong keeps popping up everywhere. Kevin Rudd exploited that magnificently in his election campaign to win office which has now left him even more vulnerable to criticism than was the administration of John Howard. The Labor promise to fix the problems — to end the blame game — was clear and unequivocal but so far there has been little action that voters would consider has made an improvement.

Consider this list of stories from just the last week and the opportunities they should have presented to the Opposition: 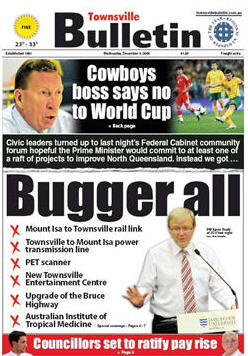 Only one of those stories has been exploited by the Opposition. Liberal leader Tony Abbott on a visit to Townsville just after the PM did promise to provide the city with a PET scanner.

Perhaps his team learned something from the favourable reception to that effort for there have been a couple of stories in the Murdoch press — one by Dennis Shanahan and the other by Glenn Milne — suggesting that health and hospitals are about to be featured at last.

Clever ad placement. I am too polite to make any banana jokes about Gail Kelly for we should not kick bankers when they are down but her competitors at the National Australia Bank are not being as considerate as this ad placement from the weekend shows:

Not too polite to hit them with a hammer. An English amusement park proprietor is doing good business with this new arcade game: 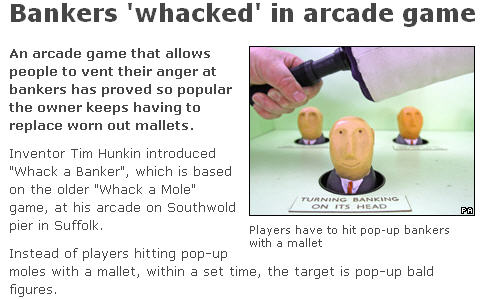 On a more serious level the London Sunday Times reports that the British Labour Party has improved its position in the opinion polls since announcing a punitive tax on bonuses paid to bankers.

Don’t let a few months spoil a good story. If it’s good enough for the BBC then it’s good enough for me. “Stoned wallabies make crop circles” tops this morning’s list of most shared stories on the BBC News website and is in the top 10 most read stories as well. “The one interesting bit that I found recently in one of my briefs on the poppy industry was that we have a problem with wallabies entering poppy fields, getting as high as a kite and going around in circles,” the Tasmanian Attorney-General Lara Giddings is reported telling a parliamentary committee. “Then they crash,” she added. “We see crop circles in the poppy industry from wallabies that are high.”

What embarrassed me about this yarn was not the damage done to the reputation of my old home state by these stoned marsupials but that it took the BBC to draw it to me attention. I apologise to those readers of my morning media blog for failing to pick up the original report in the Hobart Mercury of 25 June this year which the BBC plagiarised (without attribution, the naughty people). 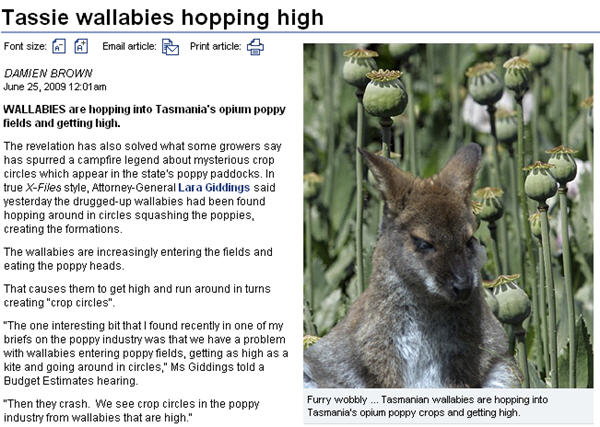 The Power 50: meet the most powerful women in Australia

Interesting to see Abbott’s comments re:PET scanners, considering the Liberal Government constricted the widespread introduction of PET scan funding…there are still allegations of fraud and dishonesty with the MSAC process even after a Senate Committee…..and when the technology was given limited Medicare funding (as it should have) it was to fund the scan itself….all the infrastructure (scanners) were put to tender and ended up being funded by private enterprise or State Govs…Thanks for the belated conversion TFA