On the ground at the Copenhagen protests

Crikey's Matthew Knott and Anna Rose have been blogging at Rooted and filing daily from Copenhagen. Over the weekend they wrote accounts of their personal experiences of the protests and subsequent arrests.

Crikey‘s Matthew Knott and Anna Rose have been blogging at Rooted and filing daily from Copenhagen. Over the weekend they wrote accounts of their personal experiences of the protests and subsequent arrests.

Danish police have released hundreds of activists who were detained during a mass rally to demand a global climate pact, as police were accused of overreacting to sporadic street violence.

Only 13 of the 968 people detained during the demonstration in Copenhagen remain in custody today, according to police. Of those, two Danes and a Frenchman are set to appear in court on preliminary charges of fighting with police.

An estimated 40,000 people joined Saturday’s mostly peaceful march towards the suburban conference centre where the 192-nation UN climate conference is being held.

Matthew Knott writes this morning in his Rooted post “Copenhagen’s climate cages filling up with activists arrested for ‘pre-emptive’ reasons”:

Crikey today witnessed an entire 230-person strong climate change demonstration placed under arrest, although there was no sign of violent behaviour by the protesters. According to the Danish police, the protest had not been authorised; however, until the arrests, police officers had facilitated the progress of the march and told activists they would be allowed to continue.

Journalists and even a jogger are believed to be among those now being housed in the special steel cages brought in for COP15.

A Copenhagen police spokesman said police had found bolt-cutters and gas masks when they searched the sound wagon leading the demonstration. 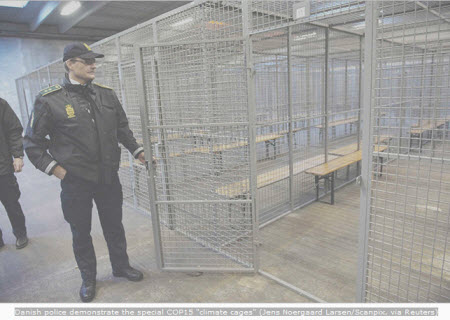 “It seems totally unprovoked,” said Richard Bernard, of Climate Justice Action, an activist group opposed to market-based solutions to climate change. “There were no meaningful acts of disobedience. Police are shutting them [the protests] down before they’ve even had a chance to have their say. It’s a human rights issue, a freedom of speech issue.”

In today’s “Hit the Production” rally, activists had hoped to shut down Copenhagen Harbour to protest the international shipping industry’s role in causing climate change. They didn’t even get within sight of the harbour.

After marching slowly and peacefully through the city for about an hour, the first sign of trouble Crikey noticed was a small band of activists trying to run ahead of the main pack. From that moment on things got nasty: everything seemed to move in fast-motion as journalists, photographers, protesters, passers-by, all in a total state of confusion, were pushed and shoved by the police. Officers in riot gear, some with dogs, outnumbered the protesters; perhaps by as much as two to one. “Take a chill pill,” yelled a protester. “What are we doing that is illegal?” It was a pretty scary place to be, as the following video shows: 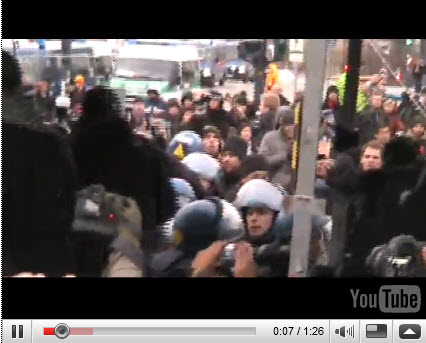 Police officers jumped aboard the activists’ sound wagon and kicked them off. Police trucks surrounded the scene, blocking everyone, including the media, from leaving.

“You will be allowed to continue with your demonstration in a few minutes,” said a policeman with a megaphone. Ten minutes later, he announced that all the protesters were under arrest. No reason was given. Some protesters later claimed that police had used pepper spray as they made the arrests.

Read the rest  at Rooted.

Meanwhile, Anna Rose wrote in her Rooted post “From the demonstrations at Copenhagen”:

I’m trapped inside a police “pen” in a Copenhagen street with about 500 protesters who’ve been surrounded by police vans and dogs to stop anyone getting in or out. As the police moved in, I went upstairs to my friends’ apartment — which amazingly was right on the street where everything was happening. I looked outside the window, and couldn’t believe what I was seeing. More than 100,000 people were part of the rally for a fair, ambitious and binding deal to reduce emissions — and the police ran in, split up the peaceful protest, blocked off the street with police vans and dogs, and detained hundreds of protesters. They — and I — are still here right now.

Today was a large and peaceful march for climate action. What I saw today was unprovoked police storm the main rally in what looked like a planned, premeditated manoeuvre by police. Police vans moved into position ready to strike at a peaceful crowd, scattering families with young kids. The scale of today’s demonstration was extraordinary and today’s police actions distract from the reasons that all of us are here — because the world can wait no longer for action on climate change.

ABC is reporting that the protesters were throwing bricks — which is completely untrue from what I saw from my window on the 4th floor overlooking the whole scene. The police were not provoked in any way before they moved in on the rally. Most of the protesters right now are at a candlelight vigil calling for a treaty based on 350 parts per million in the atmosphere. This aligns with the AOSIS text released yesterday at the negotiations.

Read the rest at Rooted.