Say goodbye to Hollywood Lachlan … The Age goes back in time …

Lachlan Murdoch has abandoned plans to to become a Hollywood media mogul and will instead be a humble Australian radio mogulette. And how do Age insiders see their move to more salubrious surroundings?

Lachlan Murdoch’s Hollywood dream is over. Lachlan Murdoch has abandoned plans to to become a Hollywood media mogul and will instead be a humble Australian radio mogulette. London reports say Murdoch pulled out of involvement in the group bidding for most of the assets in Nielsen Business Media.

But the backer in the deal is Guggenheim Partners, a US investment management firm chaired by Bear Stearns last chief executive, Alan Schwartz, rather than Illyria, Lachie’s private investment company.

“People with knowledge of the situation in Australia confirmed Mr Murdoch’s 11th-hour decision against bidding for the trade magazine and trade show group. They said he would prefer to concentrate on driving value from his latest investment – half of the DMG Radio in Australia that he bought last month for $A112 million,” The Financial Times reported. — Glenn Dyer

How Age employees see the move. This has been written by one of the more clever wits among us here at Spencer Street:

By now your boxes should all be packed, sealed and countersigned by two Justices of the Peace. But they’re not, of course, because you’re a journalist and you do everything just before deadline.

Make sure you pack your boxes from bottom to top, not top to bottom. Placing files or stationery at the top of the box before the bottom area is filled is not only against the law of gravity, it is in breach of several OH&S guidelines.

Should you run into trouble in the middle box area, we will be running sessions every ten minutes in the conference room titled ”The Troublesome Middle-Box Area, some handy tips”. The sessions run for approximately 40 minutes.

Our IT helpdesk will be unavailable to help with IT during the move as they will be busy with, er, stuff.

In the meantime, they have activated the secret switch in your computer that means every IT problem can be fixed by ‘percussive maintenance’, that is, banging the side of your PC lightly but firmly. Swearing is also encouraged, as it will halve the reboot time and CyberNews may even work properly.

After the move is complete, plus a few days for them to finish their… er, stuff… they will deactivate this switch and the IT helpdesk will return to its usual practice, except with a slightly more shifty air.

When moving towards and entering the new building, ensure your feet proceed in a left-right-left-right-left-right pattern. If you come to the end of this pattern and are still not within the building, the concierge will come out, countersign your form, and you may repeat the pattern until you are at your desk.

At this point it is important to stop. If necessary, finish the left-right sequence by marching in place WITHOUT forward movement.

Once in the Media House, note that all online staff will be surrounded by a new paywall.

When obtaining original, high-value content from a member of our online staff, you will be required to make a small micropayment using your credit card.

Remember to get a receipt for all such content, even jokes by Basil Hegazi.

You should now be aware that Media House has windows – a modern innovation that will be unfamiliar to many Spencer St workers.

Windows transfer light, some heat, but NO AIR from one side to another. Please do not be alarmed by the slight refraction of the light, and at all costs DO NOT ATTEMPT TO WALK THROUGH THEM. Though it looks like there’s nothing there, in fact there is a substance known as glass. Also, in many cases the floor is not continued as a guaranteed amenity on the obverse side.

In preparation for this, we will be running sessions every two minutes in the conference room titled ”Windows – This isn’t something to do with my PC, is it?”. The sessions run for approximately five hours.

Variety Magazine goes behind paywall. Variety will phase in a paywall starting today, a return to its pre-2006 model and a big gamble that its long history as the Hollywood daily will spur users to open their wallets. – Newser

Editor & Publisher to cease publication after 125 years. Editor & Publisher, the bible of the newspaper industry and a journalism institution that traces its origins back to 1884, is ceasing publication.An announcement, made by parent company The Nielsen Co., was made Thursday morning as staffers were informed that E&P, in both print and online, was shutting down. — Editor & Publisher

Google unveils news-by-topic service. Google introduced a new approach to presenting news online by topic, developed with The New York Times and The Washington Post, and said that if the experiment succeeded, it would be made available to all publishers. For now, it covers eight broad topics, such as health care reform. At the top of each subject page is a summary, a timeline of major events and pictures, followed by the opening sections of a series of articles, in reverse chronological order. — New York Times

Slate’s best books of 2009. Slate writers and contributers pick their own favourite book from 2009. — Slate

Planning on getting one more. Are there any other good sites besides nytimes, slate, and editor and pub. i should look at, or should i just keep trying abc, washington post etc?

The Age goes back in time… Today’s Age. Can you spot the error?

So what actually happened on November 11 according to The Age? Ye gods! More Tiger Woods! 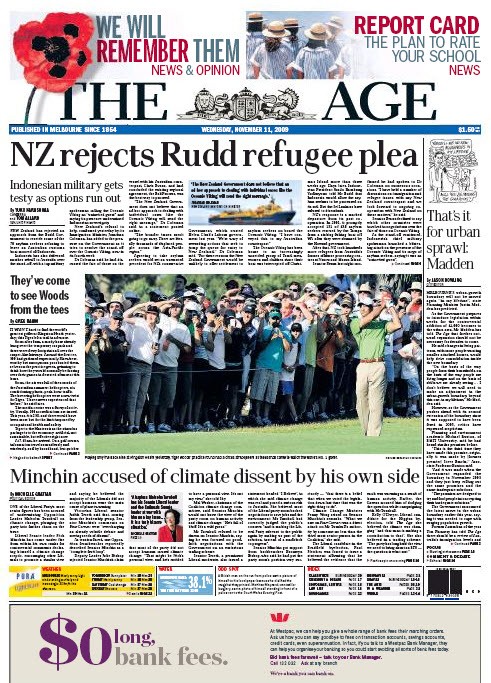