Will Kevin and Wayne be weakies?

Britain and France are finally showing some spine by punishing their bankers -- will Australia come to the party? Plus, The Daily Teleg and SMH love a good petition, Barnaby Joyce's daily double, and more.

The battle of the petitions. The real political contest in New South Wales these days is between the Daily Telegraph and the Sydney Morning Herald. Having had their 15-month campaign to oust a Premier brought to a conclusion, the battleground has switched to petitioning for an election. 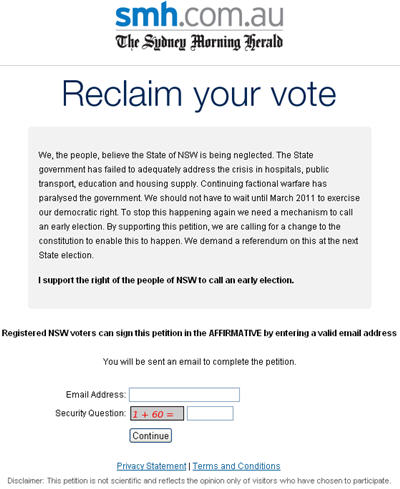 All good, harmless fun I suppose from papers that always cry foul if a politician calls an early election.

Will Kevin and Wayne be weakies? Britain has shown the way and France is joining in with a little bit of punishment for the bankers of the world. The decision to levy a punitive tax on those outrageous bonuses paid to financial manipulators is a decision to make ordinary people feel much better.

French President Nicolas Sarkozy wants other countries to join in. Will Australia have the courage to do so?

And before worrying that some of the best and the brightest might leave the banking industry if their salaries are clipped, I agree with Paul Krugman that that would probably be a good thing. As former US Federal Reserve chairman Paul Volcker noted recently, it is hard to think of anything in the recent past that financial market innovations have provided of any benefit to the economy. He told the Wall Street Journal’s Future of Finance Initiative that the banking industry reached a peak when it invented the ATM.

The temperature going up or down? No words needed really. This week’s publication from the World Meteorological Association: 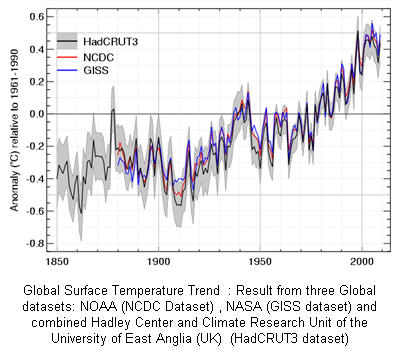 And with one week week of the Copenhagen conference almost over, I notice that there has been no change in the Climate Scoreboard showing where proposals from the conference will lead to in the year 2100.

Truth the first casualty. Worrying about facts is clearly the first casualty of the new federal Opposition approach of making opposition the focus of its political approach. A truthful headline over Tony Abbott’s comments yesterday about the cost of the “big tax” would be “This Man is a Lying Joke”.

And as for Barnaby Joyce’s daily double — the US is in danger of financial default and China should be denied permission to invest in Australia —  what can we say? Heaven help us if he gets his hands on the nation’s finances.

The good sense of the South Australian people. It was no surprise to me that the Advertiser poll this morning showed Labor’s vote having gone up. It merely confirms that ordinary Australians are well aware that politicians are people just like the rest of us and prone to be get their private lives in a bit of a muddle. Most don’t care a bit about things that do not influence how a politician governs. 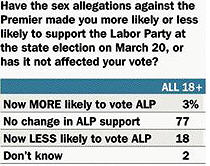 Re the recall call by BOFFA, anyone who watches say via free Google Video the great “Smartest Guys in the Room story of Enron collapse will know Gray Davis was set up bad. Anyone can crash a govt if they own the power grid as corrupt Enron did manipulating the spot market, eventually turning traffic lights off with periodic brown and black outs.

With W Bush barracking them on for base political reasons.

Now with NSW Opp. Barry OFarrell quoting Big Arnie’s removal of Davis, and omitting Enron collapse, in his recall agenda, we can see tricky politics for what it is.

Peter Frei as editor of the SMH is righteous on abc radio this morning – with his Londoner accent! How accountable and transparent are the SMH barrackers for $25B power privatisation? Not very!!! Not even f*cking locals with a commitment to the state?

There is no doubt this government are ragged, but the big media here are just as neurotic about independent cross benchers and Greens in a turnover, far better they lead a charge and put the big business Liberal party in good and proper!

A different set of mates and cronies.

Some curious arithmetic in Richard’s analysis — claiming that Labor’s vote in SA has gone up.