Rewriting the history on deforestation

The Australian government is rewriting history by claiming that the decline in deforestation emissions has primarily been the product of government policy, writes Andrew McIntosh.

Most people who follow the climate debate are aware that the primary reason Australia will meet its Kyoto target is the impact of the so-called “Australia clause” (Article 3.7(2) of the Kyoto Protocol). This clause allows countries with net emissions from Land Use, Land Use Change and Forestry (LULUCF) in 1990 to include emissions from Land Use Change (i.e. deforestation) in their base year emissions estimate.

This clause was a rort pushed on the international community at the dying moments of the Kyoto negotiations. At the time of the negotiations in 1997, Australia was aware that deforestation emissions were unusually high in 1990 and that they had fallen between 1990 and 1997. Simply by including deforestation emissions in the base year, Australia knew it could artificially increase its Kyoto target by a considerable amount.

Since then, the Australian government has been keen to rewrite history by claiming that the decline in deforestation emissions has primarily been the product of government policy, particularly the introduction of land clearing restrictions in Queensland and New South Wales where most deforestation has occurred in the past two decades. For example, the Green and White Papers on the Carbon Pollution Reduction Scheme attribute the decline in deforestation emissions to the steps taken by “governments and land managers” over the past 20 years. The Garnaut Report claims that “land clearing has slowed significantly since 1990, primarily due to regulatory controls”. And last night on the 7:30 Report, the minister for climate change, Senator Penny Wong, did her best to uphold this version of history. An extract from the transcript of the 7:30 Report interview is set out below.

KERRY O’BRIEN: OK. Well when you’re talking about political will, let me put to you about your political will and Kevin Rudd’s political will with regard to Australia’s emission cuts: is it true, as some NGOs are suggesting, that Australia is trying or will try to water down the impact of a Copenhagen agreement on Australia by fiddling the formula by which we offset our cuts based around our land and forestry use in a way that would let major industry polluters in Australia off the hook.

PENNY WONG: Look, I absolutely don’t accept that. I think what you’re referring to is the way we account for emissions from land clearing, which was agreed at the Kyoto Protocol. And Australia did respond to that. We did reduce our land clearing. We took active steps, particularly in Queensland, and Queensland is to be congratulated for fact that the reduction in land clearing in that state and also NSW has reduced Australia’s national emissions.

KERRY O’BRIEN: But if I can just interrupt for one second …

KERRY O’BRIEN: But, sorry, at the same time as that very convenient agreement was reached in Kyoto, industry pollution ….

KERRY O’BRIEN: … industry pollution went up by about 23 per cent.

While the government’s preferred version of history may help raise Australia’s climate credentials, it conflicts with reality. Set out below is a graph of Australia’s deforestation emissions between 1990 and 2007 (the 2006 and 2007 estimates are preliminary). What the graph shows is that deforestation emissions were very high in 1990, they declined sharply to about 70 MtCO2-e in 1995, and since then they have hovered about 60-80 MtCO2-e. 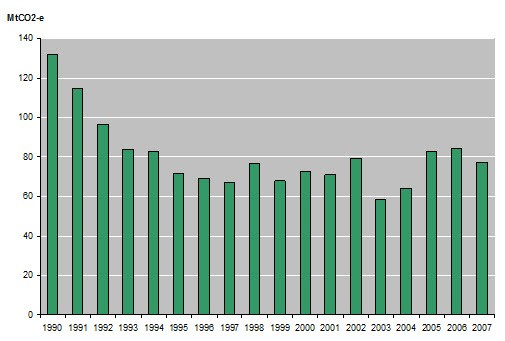 So what caused the sharp decline in the early 1990s? We can immediately discount ‘active steps’ taken by government because reform of the land clearing laws in Queensland and New South Wales did not start until 1995.

On 10 August 1995, the Carr Government in New South Wales introduced the State Environmental Planning Policy No.46 – Protection and Management of Native Vegetation Policy (SEPP 46). This was the first substantive attempt to control deforestation in New South Wales and it triggered a decade of reform that culminated in the passing of the Native Vegetation Act 2003 (NSW).

Queensland’s land clearing reforms followed a similar trajectory. They were kicked off by the passing of the Land Act 1994 (Qld) and the release of the Draft State Guidelines for Broadscale Tree Clearing on Leasehold and Other State Lands in Queensland in March 1995. As with New South Wales, the reforms of 1995 were the first real attempt to bring clearing rates down in Queensland and they were followed by a series of additional changes.

In both cases, the chronology of events effectively rules out direct regulatory action as a cause of the decline in deforestation that occurred between 1990 and 1995. The most likely major drivers of the trends seen over this period are commodity prices and climatic variations. During the late 1980s and early 1990s, there was above average rainfall and high commodity prices, the combination of which appears to have triggered historically high rates of deforestation. With the onset of the global recession in the early 1990s and the 1991-1995 drought that struck Queensland, these drivers subsided and deforestation rates fell.

The clearing reforms since 1995 have had an influence on deforestation rates but the precise extent of this influence is unclear. The earlier period of regulatory reform between 1995 and the early- to mid-2000s appears to have largely failed to drive clearing rates down. In Queensland, they may have simply brought clearing forward. The most recent major changes that came into effect over 2004 and 2005 seem to have had a more positive impact, especially in Queensland. However, the jury is still out on how effective these measures have been.

Irrespective of what the evidence finally reveals, what can be concluded with confidence is that the idea that the primary cause of the decline in Australia’s deforestation emissions since 1990 has been government action is overly simplistic and a misrepresentation of history.

Australia received an artificially high deforestation baseline at Kyoto because of the Australia clause. This significantly reduced Australia’s abatement obligations under the Protocol and meant that it did not have to introduce substantial measures to achieve real abatement in the first commitment period.

The next time you hear the Government touting Australia’s deforestation credentials, remember the history.

Hail the Bligh government … at least for the environment

Thanks Andrew: clear and well presented. It will be hard to argue against it! Let’s wait and see what some of our regular bloggers (the ones loyal to the polluting inudstries) have to say!

What is most shocking to me, and provides a great example of just how bad the political situation is within Australia, is that when Andrew says

[The next time you hear the Government touting Australia’s deforestation credentials, remember the history.]

he means BOTH the Howard Liberal government and the Rudd Labor government.

Labor provides lots of spin saying they care, but when it comes down to it, the differences between Howard and Rudd and hard to find.

Your graphs of failed prevention of land clearing correlates with other data I’ve seen.

Self proclaimed greenie Bob Carr bluffed and duchessed alot of NSW green movement and others into either silence or cooperation with his PR from 1995 onwards about his lack of effectiveness on land clearing. There is virtually no accountability here for all that greenwash and mutual backslapping and selective annointments by big media. It’s such a sleazy business.

An example is a Chris Masters report on 4 Corners about 8 year ago suggesting clearing rates were about 30K ha a year in NSW. This was a very dubious and gross underestimate but impossible to get ministerial transparency. It was very disappointing to see the abc flagship run that metric. I wrote to Masters saying he got it wrong but it made no difference, and blogged it too.

Scroll down here, past the strong report by Stephanie Peatling in 2003 notable as an exception (former researcher to Alan Ramsey, with gig in Sun Herald now) to copy of polite memo to Chris Masters dated 13/3/2001

And if you scramble around the menu there you will see a catalogue, pre google domination of the world, of

Which is why skinny doesn’t really like moi. To me Carr used green as a moral veil, the way Keneally and Keating use(d) social justice as a moral veil. Every big party politician needs that moral claim to authority. The question really becomes – what is actually going on behind the veil? What is the overall environmental performance? The overall policy efficacy. The overall merits culture and transparency. The revolving door between big party and big media makes it too easy to be selective and offset and confuse bad stories with another rose/green tinted version.

I’ve made it my vocacion to try and untangle this dodginess via expoose in community media. But it’s not a ticket to popularity – I can tell you. Saying Chris Masters is a goose doesn’t play. But it is important. It’s not unlike The Greens Democracy4Sale are now famous for untangling the money trail.