There is in this strong employment growth a distinct danger signal for the Labor Government.

Take advantage while you can. Another comforting set of employment figures out this morning from the Australian Bureau of Statistics for Prime Minister Kevin Rudd and Treasurer Wayne Swan. An extra 31,200 extra people in full time employment in November was again comfortably higher than the business economists were expecting. The median expectation of the 22 surveyed by Bloomberg was for an increase of 5000. 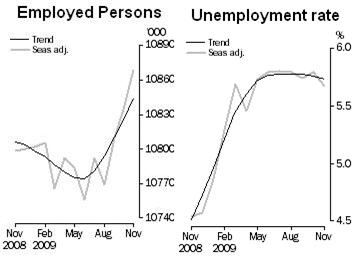 There is in this strong employment growth a distinct danger signal for the Labor Government. It makes it virtually certain that the Reserve Bank will continue with its course of regular interest rate rises.

A prudent politician will be seriously considering holding an election before there is time for more than one such rise. The Prime Minister should put out of his mind worrying about what a March election will mean for when the election after next will be held.

A sad passing. It is not just newspapers that are dying. The dead hand of Rupert Murdoch’s accountants have struck down the once great magazine The Far Eastern Economic Review. After more than 50 years of publication it apparently no longer fitted in with the plans of its last owner – the Wall Street Journal. Having been changed from a weekly to a monthly a couple of years ago, the last issue is now on sale.

Tiger still well in the lead. In countries where golf is a popular sport there is no doubt about what is the big story of the month. Tiger leads the most read list almost everywhere.

Not a Copenhagen conference story in sight.

Martinis with legal opinions. A Tokyo lawyer plans to open a bar where he would serve up both drinks and legal advice. “If you look for a lawyer after something happens, it’s too late,” says 29-year-old attorney Jun Sotooka. “You feel relieved if you can talk to someone you have a real affinity for, so the bar is a good place to meet for both the lawyer and the client.” The killjoys of the Daini Tokyo Bar Association — of which Sotooka is a member — has demanded the plan be put on hold, saying that it amounts to legal referrals for profit — a violation of the Lawyers Act.

Grass roots humour. There is rarely anything sophisticated about John Singleton’s sense of humour and so it was last night with the John Howard masked stripper bursting from Bob Hawke’s 80th birthday cake. It was an even coarser display than the singing cowboy riding a horse on to the dance floor that Singo organised for a Hawke election victory 20 years ago. 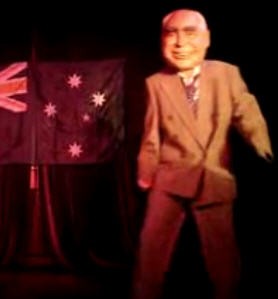 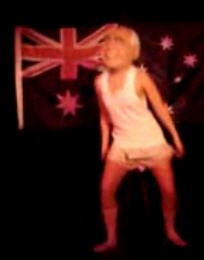 Growing sexual equality. By one measure the sexes are getting more equal. Figures out from the ABS this morning show that the number of women in prison increased by 57% between 1999 and 2009 while the male prison population grew by a mere 35%.

So does Dr Susan Alberti refund her winnings back to channel 9 now? Does this look familiar? I voted for Bob Hawke back in 1983 and throughout the 80’s, what a fool i was.