The now-notorious Cool Bananas video, sent to hundreds of thousands of Westpac customers on Monday by demoted executive Peter Hanlon, resulted in an instantaneous i-Snack 2.0-style backlash after it appeared on the Sydney Morning Herald website overnight.

The animation, which rivals the Hungry Beast‘s graphics department for puerile infantilism and strongly resembles this treatise on the mechanics of the global financial crisis, is an apparent attempt to explain increases in wholesale funding costs to the layperson.

”In some ways a bank is really just like a company that sells banana smoothies. A bank is a business that buys and sells something. Only in this case that something is money,” a voiceover intones, in the manner of a Hi-5 presenter on Mogadon. 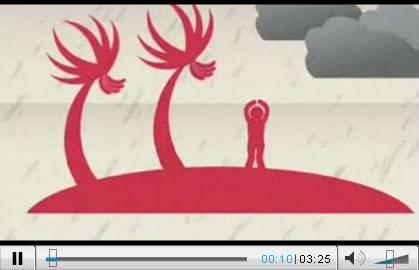 In the video, bananas represent inter-bank lending rates, the global financial crisis is played by Cyclone Larry and domestic home loans become smoothies. It attempts to defuse the wall-to-wall outrage that smashed Westpac’s spinners last week after the bank inexplicably decided to raise its headline rate by 45 basis points — almost double the increase in the official cash rate.

But the Twitterati, and Prime Minister Kevin Rudd, were not amused. Here’s just a sample of this morning’s vitriol:

P45K F-CK YOU WESTPAC, AND F-CK YOUR BANANA SMOOTHIES TOO!! C-NTS!!

safarik omfg — I just watched the @westpac Banana Smoothie Video. Seriously #wtf! Can the tone be a little more patronising?

blakepup Tried to order a Westpac from Boost this morning. Was out of my price range.

nickdallariva @westpac UR bananas video is a good idea, executed averagely and delivered with appalling timing. Y educate me now, because you care? Not!

lindystephens OMG — who on earth thought this was a good idea?

sassymisst Westpac (oh yeah, that’s my bank), have compared banking to bananas. They have just proved they are a bunch of monkeys.

wadedog westpac has lost the plot haha …  it’s like watching a business having a mental breakdown …  sad really.

witmol Can I just add that, unlike bananas, money doesn’t grow on trees? #westpac #fail

clintonduncan And the #westpacrape goes on, and on. RT @camerongrice Westpac is like selling banana smoothies

jikon If Westpac thinks that interest rates are bananas, then its customers must be monkeys.

thewetmale RT @GrogsGamut: Just watching the Westpac infomercial. I still want to change my mortgage, but geez I could murder a banana smoothie rig …

reach_hamish Was Paul Keating right when he said Australia was a banana economy. That’s what Westpac are saying.

scottlovegreen @patrickcoghlan Westpac. WTF? Are you drunk? Big shovel needed for this balls up. #westpac #fail *Where are the chaser boys : )

Mike Smith, of Inside PR, told Crikey that the Westpac attempt at damage control looked “sick”:

“It might have worked a week ago before the fall our over Westpac’s double rate rise, but this is far too puerile, far too late, I think it makes customers feel like they’ve been treated like children.”

Smith said that the video reflected the bank’s underlying problem communicating with its customers.

“The message they’ve tied to get across is important, but the way they’ve done it is disastrous — they should have been selling that message a year ago.”

The bank’s tactic last week of shielding CEO Gail Kelly from the spotlight after the 45-basic point announcement was also a balls-up, said Smith.

“Up until recently Gail Kelly was one of the best things going for Westpac. If they were going to do something dramatic they should have had their leader up front explaining.”

The only upside to the nightmare is the price war that has broken out among the other major lenders, said Smith.

“The last time I can remember that happening was in the 1990s when the NAB decided to slash its rates.”

The video was one of the last acts of departing retail and business chief Peter Hanlon, who became the bank’s lowly “transformation” head last week.

But as Adam Schwab reports elsewhere in today’s edition, not only is the comparison weird, but it’s also incorrect.

“When banana prices went up to $17 a kilogram (in 2006, after Cyclone Larry), you basically didn’t sell banana smoothies anymore. People up here weren’t prepared to pay more than $4.50, which was the normal price for a banana smoothie.”

C’mon Noel, what about the annual bonus you paid yourself? fess up!