Tips and rumours: Gail Kelly doesn’t like women in the exec ranks?

Is Gail Kelly actually not a fan of promoting women in the exec ranks at Westpac? Is it a repeat of her time at St George? Plus, they are a cruel bunch down at the WA Libs.

It is widely known through head Office at Westpac, that Gail Kelly is not a supporter of women in the exec ranks. This occurred at St George, and has been carried on at Westpac with the departure, or demotion of senior women that were developed under David Morgan’s regime. Moreover, Kelly turns a blind eye to the boorish (internal) behaviour of certain senior males (ex-St George) in the exec ranks. She is more interested in Public Relations. The Board remains oblivious.

They’re a cruel bunch in the WA Liberal Party. The fun started when Dennis “where’s my guernsey?” Jensen jumped on Facebook to announce to the world that a fourth consecutive Liberal leader had done the bleeding obvious and not put him anywhere near the frontbench. The emails were soon flying thick and fast. Some pointed out that Jensen should just be grateful to the party for saving his bacon for no apparent reason after losing his preselection on two separate occasions. But the pick of the bunch actually gave Jensen the promotion he so dearly craves — he’s now been dubbed the Shadow Minister for Mediocrity.

Tony Abbott may not have looked too hard at his new climate denying shadow ministry. If you read the official PR, buried at the end was the confirmation that “Genetically Modified Orgasms” MP Jason Wood maintained his position as Shadow Parliamentary Secretary for Justice and Public Security. Jason run afoul of the party faithful during the 2007 election when he dropped all Liberal branding and ran as a virtual independent.

What Abbott may not have seen is the flyer which hit the La Trobe electorate letter boxes this week — a colourful piece of self promotion aimed at Generation Y where Wood advocates a cut in emissions of between 25% and 30% by 2010. This from a man who has also claimed not to support an ETS. Interesting that Wood is also claiming that the flyer is funded by himself so as not to burden the taxpayer.

It appears again that Wood is playing to the electorate and ignoring the party bosses.

Not sure if this is new or newsworthy, but the sample passport in DFAT’s photo guidelines has John Citizen residing at “Helm’s Deep” — a city from Tolkien’s Lord of the Rings. It was put up during the Howard years, when the threat of an ancient, resurrected evil exerting its power from a grotesque fortress in the southeast of the land probably resonated with public servants.  And shouldn’t it be “John Subject?” 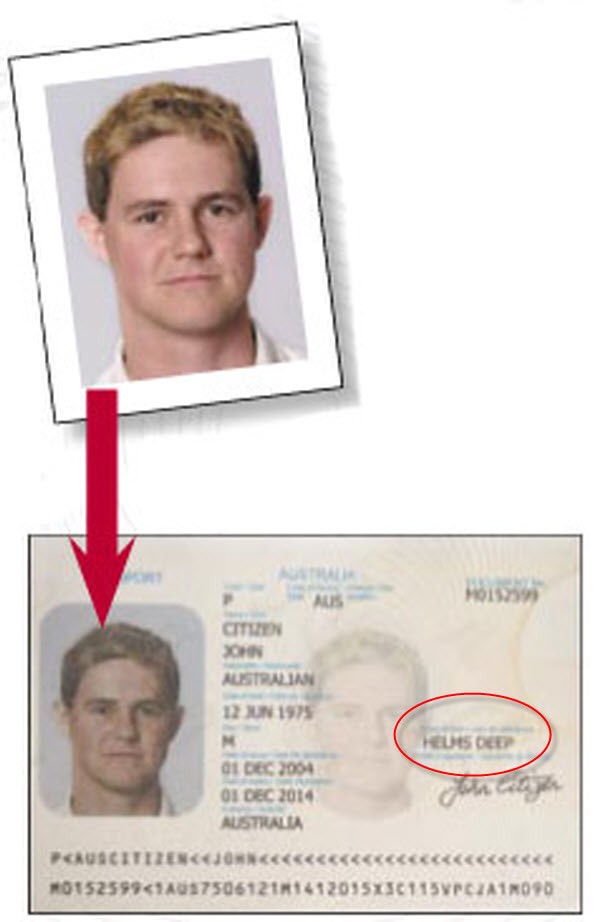 The Australian‘s “See the entire new-look shadow cabinet” is an absolute pisser! Open the PDF (received by The Australian direct from the Liberals) and right click on “document properties”:  title: “FOURTH HOWARD MINISTRY”!

The poor over-worked hacks at the Bendigo Advertiser are getting pretty restless about editor and perennial Liberal candidate Peter Kennedy’s “Buy Local” campaign. The campaign is simple enough, businesses sign up, pledging to source products and services locally. But the extra sweetener? A “story” with accompanying picture about your business in the paper.

News journos are being sent to write these fluff pieces for every edition and they’re getting pretty tired of it. Here’s a magnificent example of such a “story”. The Addy’s desperately trying to gain “credibility” ground on the Walkley award-winning Bendigo Weekly. This isn’t the way to do it.

I’m stunned at the silence on the pathetic product, and service, that is TiVO in this country. I haven’t gone home yet, but as of yesterday evening the TiVo EPG still had ABC3 as “To Be Announced”!  Even my paper-based Newspaper TV guides had ABC3 programme details!

Try to tape a show that’s not in the EPG — as best as I can tell, it can’t be done. Try and tape a programme that starts before the TiVo’s EPG time — as long as it’s not more than 5 mins early, it can be done if you’re prepared to go through a ludicrous amount of steps — but it’s a pain.  My TiVo is my first and last, and I wouldn’t commend it to anybody.

Read Telstra’s Whitepages app reviews on iPhone. They are obviously written by Telstra (or a Telstra paid person) and rank the app high, of course.

As a drone working on contract to a labour-hire company in a Telstra office I’m waiting with trepidation to find out why Telstra has installed big TVs on walls around the office.  We’re told that they are being installed in all Telstra workplaces, but no-one can tell us just what they are to be used for.  Anyone know?

The Power 50: meet the most powerful women in Australia