Rudd second in press coverage, second week in a row

Kevin Rudd still second fiddle in volume terms to the Opposition Leader, albeit a different one. Turns out a leadership spill makes you pretty popular in the media.

Kevin Rudd still second fiddle in volume terms to the Opposition Leader, albeit a different one, as the former leader stays in the top three despite working so hard to keep his head down and give the new leader clear air. The Senior Bishop, meanwhile failed by one spot to get into the list with her Abbott and his Deputy Bishop.

NSW’s first female Premier definitely goes into the mix for shortest honeymoon for a new government leader ever, its hard to be shorter than none at all, with blog posts particularly virulent across all major media, although her main challenger for the job Frank Sartor may have been able to get even worse media if he had somehow managed to get the right patronage to win the job.

Coverage totally dominated by Federal and NSW leadership changes and their main players and most other media dominated by Tiger Woods, which we’re thinking Mike Rann might be feeling not too unhappy about. 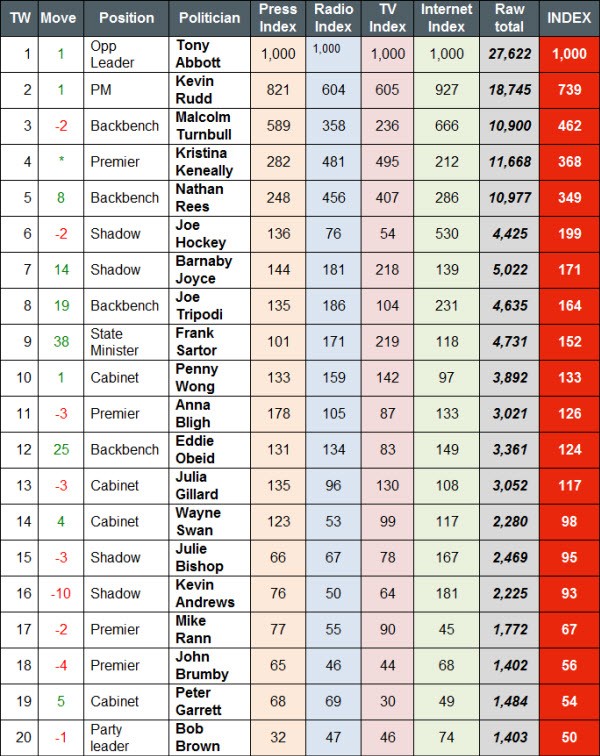 The real contest on talkback begins, and we’re sure it will be a cracker, and we’ve had our first Munich agreement mention already.

They want to play what? Where? In the middle of winter!?! Well, the man’s got a right to protect what he sees as his sport’s best interest, despite what the rest of us may think.

The simultaneous rise and fall of the Fahour brothers