Fright in wake: Airbus in scare with turbo-prop at Sydney

It was a scary case of big meets little at Sydney Airport on November 8 last year, when the wake turbulence from a giant Airbus A380 upset a tiny SAAB 340 turbo-prop as both were landing.

It was a scary case of big meets little at Sydney Airport on November 8 last year  when the wake turbulence from a giant Airbus A380 upset a tiny SAAB 340 turbo-prop as both were landing on parallel runways.

The incident, which caused minor injuries to one woman passenger on the REX commuter flight arriving from Orange, has just come to light in an ATSB report on the incident.

And it has caused an important rule change requiring air traffic controllers to impose “super wake” separation rules on very small aircraft where they are using a runway parallel to much larger jets such as the A380.

The ATSB report reveals that this could have been a much more serious incident.

It doesn’t identify the A380 involved, which at that time in the early morning could have been one flown by Singapore Airlines, Emirates or Qantas, but says that the big jet and small turboprop were approaching the parallel runways from the south.

However, there was a moderate crosswind at the higher altitude flown on final approach by the A380, which the ATSB believes deflected the turbulence vortices generated by the big jet into the path of the lower turbo prop as they sank toward the ground as shown in the diagram below. 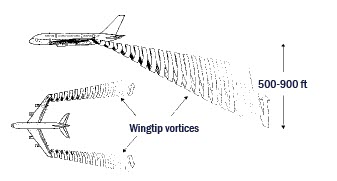 The result for the REX flight was spectacular. According to the ATSB, it was at about 2400 feet when it rolled a very steep 52 degrees bank to the left, with a nose down pitching motion of 8 degrees, then rolled back through wings level to a 21 degrees left bank.

The report says the small plane, carrying 33 passengers, two pilots and a flight attendant, lost 300-400 feet in a period of 9-15 seconds “during which the crew regained control of the aircraft”.

Some statistics to consider in this encounter. The double-decker A380 is 73 metres long, with a 79.5 metre wingspan and a wing area of 845 metres squared.

At the time, Sydney was one of the world’s busiest A380 airports but there was no international or Australian rule requiring wake turbulence separation between the giant Airbus and smaller aircraft using parallel runways.

There is now such a rule in Australia, and while the A380 doesn’t fly into anything like Sydney Airport with its high proportion of small commuter flight movements, the incident is expected to see the rules for keeping the big jet away from smaller jets modified worldwide.

Oh god, air travel is about to get even more hellish

Note that the wing roll experienced by the smaller plane began with a 52 degrees left bank, then wings level, then a 21 degrees right bank (not back to the left) as reported above.

Thanx for the clarification, which I was going to seek. I would have been terrified on the SAAB 340. Indeed, even on big jets I’m scared by anything other than an absolutely steady approach, but I trust that it’s all ok . . .

Wow! that must have scared the daylights out of the pax on the Saab. How come nobody in authority thought of this possiblity? There are separation standards for wide bodies and bug smashers on take-off, why not on landing? Alex