Rundle: Abbott has a deep and original desire to fail nobly

If you want to understand where the "Liberal" Party is heading, forget Burke or Oakeshott -- read de Maistre's The Executioner.

By one of those useful coincidences, on the day of Tony Abbott’s elevation to the highest non-office in the land, your correspondent, in need of something to read on the tram, picked up a copy of Joseph de Maistre’s The Executioner, unreread for at least a decade. If you want to understand where the “Liberal” Party is heading, forget Burke or Oakeshott — read de Maistre.

This European politician, gadabout and philosopher essentially founded modern reactionary conservatism, arguing that the depredations of the French Revolution stemmed from a turning away from a God-given social order of monarchical authority, and aristocracy — that the ultimate end of the Enlightenment was nihilist, a blasted heath, not a society but a desert of wild animals.

The Executioner is a trilogue between a Senator, a Count and a Chevalier about the sources of order, and good, and the problem of evil. De Maistre adopts the argument that evil is a consequence of the freedom given to humans, that is necessary for them to love God — no freedom, no loving relation and God has no meaning without being loved. But there is a second type of evil, and that is the evil we must do against evil — the torture, the prisons, the executioner. For de Maistre, it is not we doing this evil, but the original evil doers. Consider the executioner, says De Maistre, a man shunned by society for what he does, living apart from society, unable to be called virtuous in his trade, a man whose thought at the end of the day is “no one can break men on the wheel better than I”. But says de Maistre:

All grandeur, all power, all subordination to authority rests on the executioner: he is the horror and the bond of human association. Remove this incomprehensible agent from the world and at that very moment order gives way to chaos, thrones topple and society disappears.

For de Maistre, it is the evil doers who are responsible for all evil. It is prisoners who build the prisons, murderers who pay the hangman, traitors who quarter themselves at the city gates. De Maistre’s attack remains the most formidable challenge to his exact opposite, Rousseau, believing that “man is born free but everywhere is in chains”.

For Anthony Aloysius Prebendary Savanarola Ponce de Leon Abbott, de Maistre is the pole-star, a predisposition that separates him even from the middle “Burkean” strand of Howard’s conservatism. Like Greg Sheridan and a few others now occupying the commanding heights of conservative politics, Abbott was cooked up in the NCC/DLP student politics of the late 1970s — an era when the Australian Union of Students was doing its best to prove de Maistre right on the “chaos” thing, in the post-cultural revolution disarray of the Left. The chaos was catnip for Bob Santamaria, whose political life had started defending Mussolini and Franco in student debates in the ’30s, and had — in Abbott and co — a last generation to hatch, and project into the future beyond his death.

The effect of a formidable political operator such as  Santamaria is lifelong — the influence either lays down some iron in your soul, as it has with Abbott, or reacting against it turns you into a simpering and neurotic man on the make (as it did with Gerard Henderson).

The possession of an idea of politics, of what it is as a distinct activity, has thus given Abbott an instant towering quality, compared to the people around him. Turnbull, Hockey, Nelson — these were political kalkitos figures. Remember Kalkitos? Those transfer figures —  soldiers, astronauts etc — that you attached to a cardboard landscape with a pencil? That’s been the Liberal Party for two years. Abbott is no kalkitos, and he may well give the party a sense of purpose and forward motion. But he will do so from the deep wellsprings of his own politics, of a sense — literal or otherwise — that the world is simply a shadow of a deeper order.

Thus it is that he will have no difficulty in reviving a harsh refugee policy — not in the manipulative manner of the Ruddock years, but from a deeper de Maistrian conviction that we do not build detention centres, boat people do. There’ll be less pussyfooting around trying to blame people smugglers, talking about overcrowding etc etc, and a much greater sense that evil and chaos is the default setting of human existence, from which we preserve a little order by the grace of the axeman’s swinging arc.

Three things flow from that. The first is that Kevin Rudd and co, this bunch of well-meaning efficient, modern people with the depth of a Chinese restaurant finger bowl, ain’t gonna win against Abbott in the law and order, firm hand stakes. Sucked into that fight, they will go down like a Sri Lankan tramp steamer. With the election of Abbott, Labor has no choice but to make this a fight between modernity and its other, between the Enlightenment, and the darkness, between a sense that human beings have the capacity to make the next step, to make a better world with our own hands — and the darker, pessimistic notions of a medieval religious politics, however much they try and spirit it out with a pair of budgie smugglers.

In this, Labor can cut with the grain. We are an enlightenment country, effectively founded in 1789 (when the Second Fleet arrived and saved everyone from starvation). What Manning Clark called “the kingdom of nothingness” can be seen as a positive injunction —  there’s nothing to but build something. This is the basic cultural disposition and orientation of the place, beyond manifold differences. It is something Labor will need to gather the energy from to effectively and successively paint Abbott as inimical to the best spirit of the place.

That shouldn’t be too hard, if Labor maintains a positive message about modernity, hope and possibility, and what a weird little creep Abbott ultimately is, rather than a fear campaign about what he might do. They may be helped in that by the fact that Abbott’s politics, de Maistre’s politics, is ultimately one that knows it has lost — it is a politics of mourning for a lost world, predicated as much by individual psychology as by clear sense. Abbott, like fast Eddy Felsen in The Hustler, like Guy Crouchback, has a deep and original desire to fail nobly, to be spared the burden of success. Labor has to find that desire and bring it to the surface, and Abbott will do the rest.

‘This kid’s a loser’ 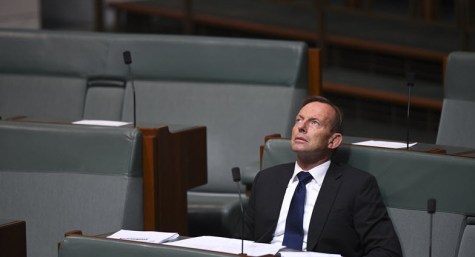 Rundle: Abbott is a joke, a backbench gargoyle seemingly addicted to failure

Rundle: if Abbott goes, Labor will have to do some serious soul-searching

Malcolm Makerras was very wrong with Higgins and Bradfield

I think the electors would be very happy for a leader with a bit of ticker.

Edmund I presume you infer that Abbott has ticker, well I guess that selection to his front bench, as probably directed by Minchin, I doubt shows ticker. Unless you take the view ticker means pick my mates and damn the rest. Abetz, Joyce, Ruddock, Andrews etc etc God help us if that motley crew ever get back to weild their dangerous right wing seperatist policies

What a well thought and wonderfully written commentary of the current state of play in our Federal political world.

To paraphrase Garnaut on the issue of climate change, Diabolus is amongst us.

The people are now grappling with the aftermath of the materialist society. Now complexity is King, the problems amoral and unforgiving and Greed no longer be the engine of survival.

This is the natural stage for the conservatives. Their platform will be their simplistic, regurgitated solutions, founded on conventional wisdom. That bedrock of conservative thought.

True believers will be saved. Their savior will be bought by adherence to the old economic and moral faith. Those who prosper are good those who founder must evil. They are to blame.

The outsiders, the non-believers will perish in the fire and flood.