Things don’t get worse for Abbott

Abbott can breathe a sigh of relief that nothing got worse for him and his party over the weekend, Malcolm Turnbull fires up on his blog, Barnaby Joyce looks after number one, and more.

At least it wasn’t worse. Tony Abbott will be a relieved man after the weekend, not because things went so terribly well for him but because for his Liberal Party they didn’t get any worse. The two by-elections comfortably returned the party candidates and there was no evidence of any extraordinary reaction to the shenanigans in Canberra during the previous week. Whatever else is happening in the electorate, the heartland hasn’t deserted yet.

The opinion polls pointed to the pre-Abbott status quo remaining, too. Perhaps Friday’s Morgan phone poll can be interpreted as holding out hope of better things to come but Newspoll this morning with a two-party preferred 56% for Labor suggests there will be no large and immediate honeymoon jump. Morgan face-to-face and the next Newspoll will give a more reliable indication.

The market has moved slightly in the direction of a Liberal improvement with the Crikey election indicator now putting Labor as a 77% probability to the coalition’s 23%.

Malcolm will not be helping. It looks like I understated things on Thursday when I wrote that Malcolm Turnbull clearly has not taken a vow of silence and is going to be a continuing irritant to Tony Abbott in the same way that Nick Minchin was to him — a constant reminder that when it comes to climate change the Liberal Party is irreconcilably split. His blog this morning suggests he is going to be positively feral as these extracts indicate: 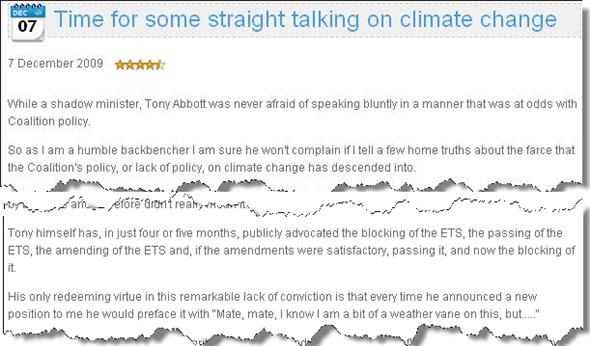 With the former Liberal leader at the forefront of the opposition, Kevin Rudd can safely trot off to Copenhagen knowing that the attack on Abbott is in good hands.

Just another self-interested politician. Barnaby Joyce emerged from obscurity as a Senator because he was prepared to play the role of the straight-talking boy from the bush prepared to say and do what he thought was right rather than toe some party line. Single-handedly it seemed like he might even give the National Party a renewed relevance in the political scheme of things as a party interested in using the Senate to further the cause of country people rather than providing ministerial jobs for its parliamentary members.

The looks were deceiving. The once maverick man has decided to join the mainstream and accept the discipline expected of a shadow minister. He has proved himself to be just another self-interested politician.

Amuse yourself at Westpac. For a little light relief take a look at the Social and Community section of the Westpac website. It takes the art of public relations spin to new heights. The wonder is not that people are now resigning from it but that organisations ever got conned into joining it in the first place.