It's sickening to think what must be happening to the marine life in Australia's once pristine northern waters now polluted over vast areas, writes Bruce Hogben.

Flying fish frightened by our cruise ship emerge from the muck, their fins/wings leaving odd zig-zag trails across the stained water to where they plop back into it, probably blinded by the chemicals. It’s sickening to think what must be happening to the marine life in Australia’s once pristine northern waters now polluted over vast areas stretching from Exmouth in Western Australia to Queensland’s Gulf of Carpentaria. And where are the birds? I did not see any sea birds from Exmouth until we reached the Gulf waters, as meanwhile over three days my camera recorded the pollution — slicks stretching to the horizon. 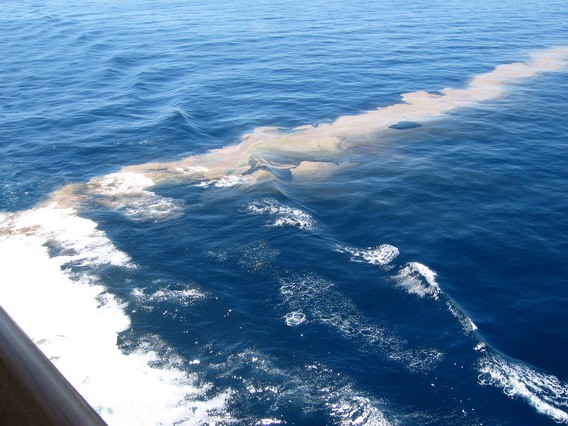 Is it all from the 10-week Montana oil rig leak finally plugged on November 2 or 3, days after a massive fire broke out on the PTTEP Australasia rig, 690 kilometres west of Darwin in the Timor Sea? Or are there more leaks that we are never told about? As Dawn Princess cruised up the WA coast at a steady 19 knots, I was amazed to see how many oil rigs are out there.

PTTEP claimed the well lost about 400 barrels a day (for 10 weeks) but some observers have estimated a flow up to 2000 barrels a day. And now we have toxic oil pollution visible over thousands of square kilometres of the Indian Ocean, Timor Sea and Arafura Sea.

The federal government has promised us a full and independent inquiry, but the damage is done. And nothing can guarantee it will not happen again. Cyclones sweep through this vast area every year.

A recent report in Crikey complained that the media had largely ignored or downplayed this horrifying event. I am from Adelaide, where The Advertiser demonstrated this with its report that the rig had caught alight — three paragraphs buried deep in the newspaper. Pathetic. Apathetic.

The cruise ship is circumnavigating Australia, having left Melbourne on November 18. We are due to dock in Brisbane on Tuesday.

Hi there,
The implications of aforementioned oil leaks do concern me, and i haven’t great first-hand experience of oil slicks, but the pics above do look rather like ‘natural’ events that can often be seen in warm waters in summer months. Trichodesmium blooms (heck, my marine bio is getting rusty… cyanobacteria?? wikipedia has exonerated me..) can form blooms and be concentrated in ‘slicks’ like pictured, with this characteristic colour, but unlike oil, a sweep with a plankton net should show it’s composed of small filaments. coral spawn at times may give a similar result, but my bets are on the tricho. I would suspect oil (even greatly dispersed) would have more of an oily/rainbowy/mucky/mirrory appearance??

I appreciated the take that Crikey delivers on the world’s issues, I’d hate for someone else to pick a fault and make a scene about this 🙂
You may well be correct, but many a person has mistaken a tricho slick for something worse, even I in my ignorant youth!

SHANE L – If what’s in view is not oil, where did the 4000 barrels of oil go? Out further? Did it sink? Where are the birds then? Gone away for a holiday break? Home for chrissy perhaps? As Bruce says, these were once pristine waters, and he didn’t see one bird.

I’m with you Bruce, I think it’s a national disgrace. Anyone who’s seen birds covered in oil can only wonder and weep – I do! They die an awful death – and as you correctly point out, what else do they injest? It’s just horrific! Thank you for showing us what’s happening. The mainstream media have conveniently lost their collective voices. Shame on them!

I think the lack of coverage for this story pretty much sums up Australia’s thoughts and feeligns on environmental issues. Ignore them, they will cost our beloved mining companies too much. Pathetic and disgusting, this country is going down the toilet fast.

I would think that Shane L is quite correct, theses blooms are a common place event in tropical waters; in any case the winds at this time of the year are from the South east meaning any oil spills are moving westward away from the Montana spill which was NW of Darwin. As for unreported spills, you have to be kidding, you can’t keep that sort a thing a secret.

I agree with Shane L – this pics may be a natural phenomenon. I have fished in northern waters in the past and flown over a lot of the seas in the NW. That ‘rusty’ bloom on the water is quite common. However, I would also say that the release of oil product onto the waters up there is a bloody disgrace and the govt must apply some severe penalties.