Will SBS, thanks to its highly successful World Movies channel, parter with Foxtel for a new Arts pay-tv channel? Plus, Anna Bligh and a hilariously placed street sign.

SBS and Foxtel partners on new Arts pay-TV channel. Apparently SBS will use its profits from its now wholly owned World Movies channel to team with Foxtel.

What few people remember is that with the establishment of pay-TV, SBS lobbied the then Australian Broadcasting Authority for its World Movies channel to be considered as a “narrow casting” channel because they were in foreign languages or independent English language movies. It did this so it did not have to dedicate 10% of its acquisitions budget to make Australian drama as is required of all other predominant drama channels on PAYTV.

A rather gullible ABA accepted this proposition and World Movies has since been one of the earliest and most profitable channels on PAYTV. Perhaps it is now time for ACMA to accept it was duped and for the 10% to be now paid. SBS has got away with this for long enough but meanwhile they are still sulking over their failed attempt in the last budget to get more funds for Australian drama.

Perhaps it is time for a management cleanout and a directive from Canberra.

With an election looming, Abbott will be looking for staff who can hit the ground running. Some old Howard government hands say they are waiting to see if the federal Liberal Party director’s wife, Peta Credlin, gets another gig before they put their hand up. They say she has “cockroach tendencies” superior to those of Julie Bishop having survived as a staffer in Nelson’s and Turnbull’s offices. But having spent a lot of time in Hockey’s office in the lead-up to the ballot and none in Abbott’s, they are tipping her days might be numbered. If he starts with a new team that doesn’t include Credlin, then Abbott stands a much better chance of attracting some experienced help.

A deliberate choice? Yesterday’s Courier-Mail had Anna Bligh pictured at the opening of the new Brisbane Airport entrance. The sign looks like it reads MORON DRIVE and points to her face! 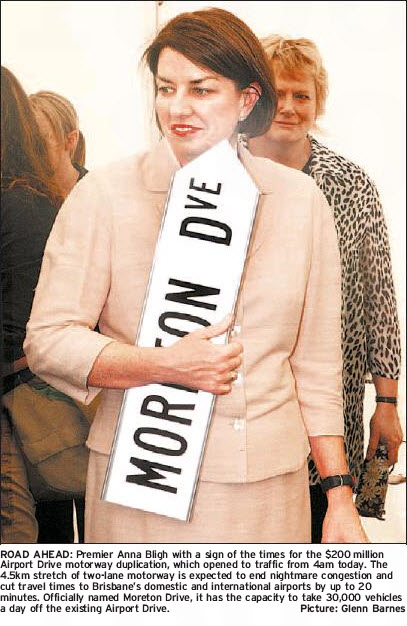 It might be worth reviewing the reports of the Wentworth Group of Scientists for an alternative way to go to reduce Australia’s carbon emissions by more than 5% without an ETS.

Re. Your “typical of Alice Springs” tip in yesterday’s “Tips and rumours”.  There is indeed a huge amount of resistance to the proposed uranium mine within 25 kilometres of Alice Springs (and alarmingly close to the aquifer that supplies the town’s water).  However, protests are rarely covered in the media, Cameco (currently drilling big holes in the region) are spinning themselves as responsible corporate citizens (with safe mining practices despite the evidence to the contrary), and the seat of government — Darwin-based, of course — looking the other way, and fobbing off Alice locals.

Alice Springs has never figured on the NT government’s electoral horizons, with the crucial electoral base in the NT being the northern suburbs of Darwin.  The NT government has their eye on the money, and apparently has no problems with foisting a nuclear waste dump on anywhere outside of Darwin, and having a uranium mine on the doorstep of the only major service centre in the southern region of the NT.  There was a small item quite some time ago in the local rag about upping the amount of uranium ore from Roxyby Downs being transported by rail — right through the centre of Alice Springs.

More recently, a group of local doctors have stated very clearly they will be leaving town if there is indeed a uranium mine going ahead just outside of Alice Springs.  They are not alone. A lot of people, me and my family included, will also leave.  Alice Springs is a service centre for a huge area — including across the borders of SA and WA.  It’s 1500 kilometres either north or south to the next major centres (Darwin and Adelaide).

The prevailing attitude seems to be to treat Alice locals like mushrooms — keep them in the dark, and fed on copious amounts of bullsh-t.  After all, Alice is only full of black fellas, rednecks, and other people who don’t matter.