Nothing gracious in defeat here

No grace in defeat for Malcolm Turnbull, as he immediately turns to his personal blog. Plus, history's most predictable coup in NSW, a honeymoon ended and big lies can work.

Watch this space. There clearly was none of that being gracious in defeat nonsense when Malcolm Turnbull got back to the safety of his Sydney home. There was a decidedly unpleasant blast for deputy Liberal Leader Julie Bishop and further fodder for Labor’s future election campaign advertising with this posting on his internet blog: 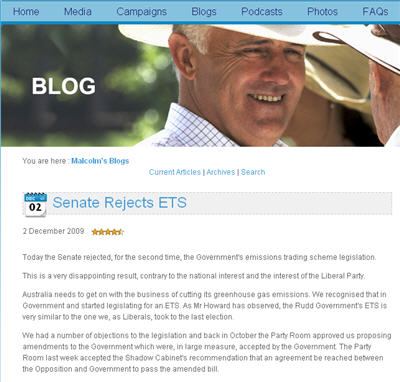 Malcolm Turnbull might be gone as Leader but he clearly has not taken a vow of silence. He is going to be a continuing irritant to Tony Abbott in the same way that Nick Minchin was to him – a constant reminder that when it comes to climate change the Liberal Party is irreconcilably split.

Malcolm Turnbull is smart enough to know that the salvation of his political reputation can only come from Labor scoring a landslide victory when the next polling day comes. If the massacre is large enough, and the support of Australians for an emissions trading scheme clear enough, it might even be possible for him to state a comeback on the basis that “I told you so.”

I expect him to do everything in his power to ensure that happens and he is not going to be intimidated by anyone threatening his pre-selection. Which makes him different from the weak-kneed Liberal Senators who yesterday showed they did not have the courage of their convictions when they caved in an tamely voted against an emissions trading scheme.

History’s most forecast challenge. The attempt to depose Nathan Rees tonight as Premier of New South Wales will go down as the most forecast event in political history. The journalists began predicting a challenge within weeks of him taking over some 14 months ago. I suppose they had to be right eventually.

The rottenness at the core of NSW Labor is shown by the final straw for some of the challengers being the determination of Premier Rees to put an end to the unhealthy relationship between the Party and property developers. The thought of going without the dollars from those seeking favours for the rezoning of property and the awarding of government contracts was apparently too much for the party’s grubby power brokers.

May March 2011 hurry along so we can be rid of this curse on Australian democracy.

A honeymoon ended. The Barack Obama honeymoon has clearly ended. The daily American Gallup poll shows the presidential approval rating is now below 50%: 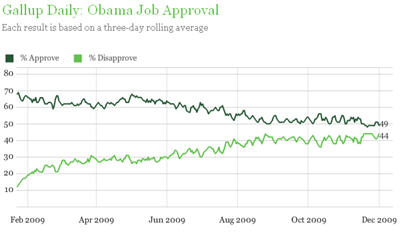 And if Kevin Rudd thinks the Australian Senate gives him a hard time, he should spare a thought for his American mate. The Democrats made the introduction of a national health insurance scheme with a government funded safety net the key element of its election campaign but the US Senate so far is not having a bar of it. At the Intrade prediction market this morning the probability of legislation being passed before the end of the year was put as low as 3.3% with things not looking that much better about success next year. A federal government run health insurance plan to be approved before midnight USET 31 Mar 2010 was assessed as a 12% chance and by 30 June as 15%.

Big lies can work. If your inclination is to think that the Barnaby Joyce line about emissions trading really being nothing else but a Labor Party big new tax plan is such a big lie that Australians would never believe it then think again. The opponents of Barack Obama in the United States have proved that if you keep saying the most outlandish things long enough and loud enough there are plenty of people who will eventually believe them.

One for the forecasters. Having rubbished those business economists many times for getting forecasts about economic events seriously wrong it would be ungracious of me not to acknowledge that this morning they got things spot on correct. The Australian Bureau of Statistics figures for retail sales in October showed a growth of 0.3% from September which was the exact median forecast of the 19 business economists surveyed by Bloomberg. 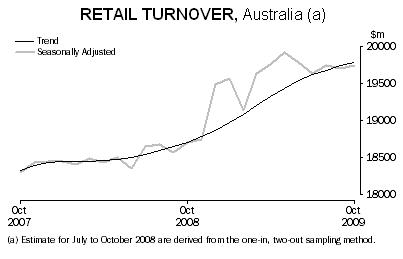 Regarding the “Big Lies Can Work” bit. People often forget that half the population is of below average intelligence.