Tips and rumours: Can the SBS spell the name of the US capital?

Who was clapping yesterday at Tony Abbott's acceptance speech? Plus, who were Sony's special guests at last week's under-watched ARIAS and how does SBS spell the US capital?

Re. your story yesterday on Tony Abbott’s acceptance speech. The media did not clap Abbott out, his supporters — Alby Schultz, Sophie Mirabella, Wilson Tuckey, Michael Johnson, Joanna Gash and a few others — did. Abbott’s supporters got a bit testy with the gallery at one point when Steve Lewis from the Murdoch press asked the Mark Latham question — leading a couple of journos to tell them to go forth and multiply.

Spotted in the audience at the under-watched ARIAS on the Nine Network last Thursday night was an interesting pairing. Denis Handlin, king of Sony BMG in Australia, and Mark Fennessy, the former head of Fremantlemedia in Australia. But now he and brother Carl are ramping up Elisabeth Murdoch’s Shine production business in Australasia (it owns MasterChef).

Sony owns 21% of Shine but in October Hollywood Reporter said that the Japanese giant had decided to sell it because Shine was now too much of a competitor. Sony took a stake in Shine in 2005, when it also agreed to be a distribution partner for the production company set up by Murdoch in 2001 after she left BSkyB. But despite JPMorgan having a brief to sort out Shine’s corporate structure, nothing seems to have happened.

The Fennessy Brothers used to own and run Crackerjack Productions (which they sold to Fremantlemedia and then became the bosses there). Crackerjack used to make rock videos and other shorts of Sony and Denis Handlin. Fennessy was sitting right next to Handlin at the Arias and the Sony boss loves to place people at public functions in the order of their closeness to him.

Interestingly one of the support acts for the Kate Ceberano concert is Australian Idol contestant Carl Riesley, who has played support on a lot of Ceberano’s recent gigs, and former AFL star Russell Robertson. Neither Riesley or Robertson are Scientologists as far as I’m aware though.

SBS Television, the station which now justifies its staff and programming cuts with the fact that they didn’t get as much government money as they asked for, is just completing a refurbishment of much of the Artarmon building at a cost of hundreds of thousands of dollars.

We know that the current management regime finds those foreign languages a bit of a chore, but it seems that they’re now even struggling to spell the name of the US capital on the very expensive showpiece wall across the middle of the new space… 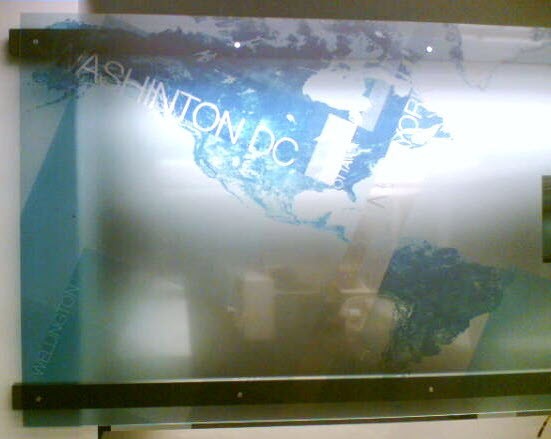 A friend snapped this photo earlier yesterday of a sign nailed to a tree alongside the Adelaide golf course. SA election preview: Labor could hold on, but does it matter?

How Olympic Dam became a mirage in the desert