The deluge of emails, letters and phone calls into the offices of coalition members against the ETS -- so we’re told -- signified a revolt! But does polling actually support this? Not exactly. Abbott, you've been warned.

The ascension of Tony Abbott to the Liberal Party leadership was launched out of a wave of hysteria gripping some parts of conservative Australia over climate change and emissions trading. The deluge of emails, letters and phone calls into the offices of coalition members — so we’re told — signified a revolt! That’s all very good and well, but if we used local contact with politicians as a yardstick for public views on any particular issue, then we’d all be wandering around believing that 80% of the country is the victim of some vast conspiracy perpetrated by the Child Support Agency.

Angry, noisy people  — usually with minority held opinions — are the ones that overwhelmingly get agitated enough about issues to start writing stern letters to politicians. So it is with emissions trading.

Nielsen asked the same question in two polls 16 months apart to gauge public opinion on a generic emissions trading scheme — not any particular system like the CPRS — just a broad generic question testing opinion on the whole general idea of an ETS. The first was back in July of 2008 and the most recent was last weekend.

One of the fantasies that you hear regularly from the wingnut end of the media, is the idea that there is this huge public backlash starting to form against climate change in general and emissions trading in particular. The problem is it just doesn’t exist. If we compare the change that’s occurred in the Total Support and Total Oppose responses over the past 16 months on the question of a generic ETS, the results speak for themselves.

Total Support for a generic ETS has dropped by 2 points — not a significant change. What has occurred though is that the “Don’t Know” camp has crystallised out into opposition to any ETS.

If we break down these results by party voter, it starts to become clearer.

Majorities of both voting blocks show generic support for an ETS. This is where Abbott’s railing against an ETS becomes dangerous for the Liberal Party, for he’s effectively arguing against the opinion held by a majority of his party’s voters. If we break this down into age groups, it paints an even more dangerous picture. 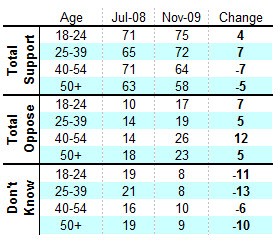 The coalition has been weak among younger voters for a while and that group is more likely to vote on the basis of climate change than any other cohort — yet 18-39-year-olds have actually increased their support for a generic ETS significantly over the past 16 months. Abbott is effectively chasing a demographic set with his bullish anti-ETS position (the over 40s)  that cannot win him an election. Yet he risks alienating a group — the under 40s —  that can lose him as many elections as he can count.

What really puts some proper context to this fanciful talk of a backlash against climate change and emissions trading is looking at the net support level of a generic ETS by major cohorts, using the last poll. 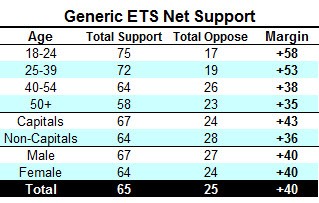 Abbott, by going in hard against emissions trading, is on the wrong side of public opinion by at least 35 points in every demographic —  going as high as 58. For all the climate change denialists running around the place in the coalition — here’s some more food for thought. Nielsen asked “which of the following statements best describes your view …” and gave three alternatives.

The results by party vote come in like this.

Only 14% of coalition voters want no ETS at all. Abbott will run into the same problem as Turnbull did when he’s forced to devise his own post-Copenhagen climate change policy — a large proportion of the coalition party room he now leads is on a completely different planet when it comes to the views of not only the broader Australian public, but the views of coalition voters.

That deluge of complaints they experienced last week wasn’t representative of anything other than a small, angry and noisy conservative rump.

The carbon tax pitch: call it what it is — a pollution tax

What a strange group of people they are who make up the Liberal Party. What on earth do they think they are achieving? They have their number crunchers. They have their stats people. What the?

I am still glad the current ETS legislation is doomed (today at least – who knows what might happen tomorrow) – because it was weak and it locked in failure. Now at least we have to take into account what happens (more likely what does not happen) at Copenhagen.

Thanks for the waffle antidote Possum, which as usual, shows what a bunch of oxygen thieves the Coalition are on this issue.

I nearly choked when I heard the ABC radio news say that the Monk wants Barnyard Joystick on his front bench! Holy Batsh!t Insanity! How in god’s name does he then propose any CPRS with a straight face?

Gonna be an interesting year watching this crazy circus perform.

“That deluge of complaints” on the ETS was merely a “small, angry and noisy conservative rump.”

No doubt. But Abbott is saying to the voters “does your bum look big in this ETS”. He can see the modest movement in this poll against an ETS and this ETS. He knows that AGW scepticism has risen rapidly since 2006, as Possum showed last week. He also knows the electorate knows little about the implications of this vast scheme. He can also rely on the fact that many people think Rudd’s Rush to Hopenhagen (or is it Dopenhagen?) is contrived.

The Right’s coup is a punt, but the odds are shortening all the time. In a year’s time the odds might be close to even money- or so they think. Apart from their visceral dislike of this ETS, the Right knew that under Bellwether Turnbull they were trapped in Rudd’s stockyard. Better to run free and froth at the mouth than to submit to the abattoir of amendments to King Rudd’s climate empire…

Even if the Right is right, Abbott’s well-deserved reputation as a Christian Brother bovver boy might yet prove a fatal handicap…expect less chest hair, threats and insults from Tony Holymary.

Maybe the 86% who voted against the ETS on one liberal politician’s website had not read the polls.

Does Nielsen’s use the same farcical sample size (674) to Labor pollster Gary Morgan that is quoted elsewhere on this site today as ‘proof’ the electorate wants an ETS?

What about a link to the original report.