No rush for Rudd to begin electioneering

The end of January is the earliest Rudd will make an announcement with an election to follow early in March, some helpful interest rate analysis from News Ltd and the ABC, and the Crikey Liberal leadership indicator gets it half right.

No need to hurry. Kevin Rudd does not need to hurry into a decision about whether or not to call a double dissolution election if the Liberals stick together and either postpone or defeat his emissions trading legislation. There is no way he will want to be out campaigning over the Christmas holidays. When children are just about to go back to school at the end of January is the earliest he will make an announcement with an election to follow early in March.

That is on the assumption that Prime Minister wants to have an early election at all. The odds are in favour of him deciding that he does, but much will depend on what actually happens at the Copenhagen Conference which begins next week. If there is not broad international agreement on measures to curb carbon emissions then the new  Liberals and Nationals Coalition policy as enunciated by Tony Abbott will be looking far more sensible than it does today. If substantial progress is made in Copenhagen towards a world-wide agreement, however, Labor would be more than happy to have climate change as the major campaign issue.

To win a modern day election a party needs to position itself as close to the mid-point of public opinion on as many issues as possible. For three years – one as Opposition Leader and two as Prime Minister – Kevin Rudd has proved quite masterful at doing that. On climate change he now is in the happy position of having the Greens on one side saying that he has not gone far enough to tackle the problem, having sold out to the major polluting industries, with the Coalition now saying his emissions trading scheme goes too far. That’s perfect positioning given the state of public opinion on this issue at the moment.

The other, and perhaps more compelling, reason to be giving serious consideration to an early election is that economic circumstances are unlikely to be better at the end of a full term in November than they will be at the end of February. Another interest rate rise by the Reserve Bank early next year will not push mortgage rates beyond the comfort zone of most home buyers. Three or four rises by the end of the year would have people really starting to grumble.

Choose your economists. Did you wonder about what the Reserve Bank would do about interest rates today? Some helpful analysis from the internet sites of News Ltd and the ABC at noon: 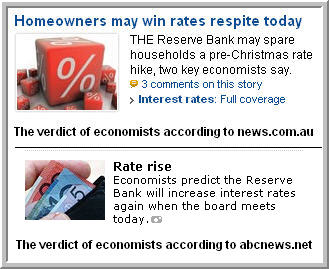 A very helpful lot those economists. For the record, the Crikey Indicator at noon was a 23% probability of no rise, a 76% chance of a quarter of a per cent rise and 1% about anything else.

The official starting prices. Well our Crikey Liberal leadership indicator did not get it exactly right but at least it was pointing yesterday to the fact that Joe Hockey was not the shoo-in that most pundits were predicting. As I wrote in these snippets: “At midday today he [Joe Hockey] was $1.35 at Centrebet, which would be stealing money if you believed the almost unanimous predictions by the press gallery pundits that Malcolm Turnbull will be ousted at tomorrow’s party meeting. Clearly some people still have their doubts about what will happen and I am in that category.” The betting at Centrebet ended up with Hockey paying $1.28, Tony Abbott $4.35 and Malcolm Turnbull $5.