News Ltd was a bit premature in announcing Joe Hockey had won the Liberal leadership this morning, commercial radio operators beef up their digital presence, Google: not so big in Japan, and more news from the media.

News.com.au had the early mail from inside the Liberal party room this morning. 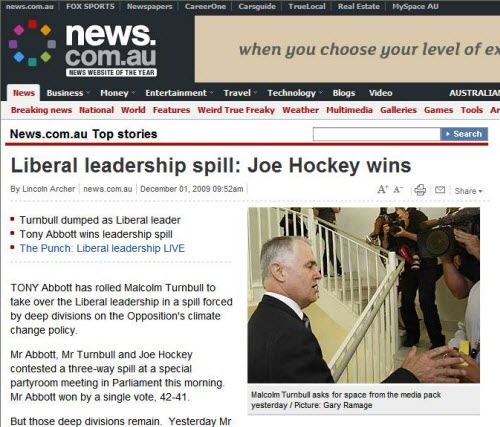 The myth of Wikipedia democracy Wikipedia is renowned for its openness — a Web site so democratic that anyone can edit its pages — but despite the reputation, the site has always been mostly edited by an elite coterie of contributors. And as many of Wikipedia’s less hardcore editors flee the site, the free encyclopedia is moving even further in that direction, amounting less to “the wisdom of crowds” than the wisdom of the “in-crowd.” — The Daily Beast

Japan: the one place where Google is number 2. In 2001, a fledgling Internet company named Google opened its first overseas office in Japan, eager to tap a huge technology market. But after eight years, Japan is one of a few major countries Google has yet to conquer. The Web giant still trails far behind Yahoo Japan, the front-runner here, operated by the Japanese telecommunications giant Softbank. — New York Times

Geoffrey Toobin on Why Tiger Isn’t Talking. Tiger Woods is under no legal obligation to speak with police. The Fifth Amendment gives everyone an absolute right to refuse to talk to them. He may be counting on the fact that if no new news emerges, everybody will move on. — CNN

Jacko’s Death Tops 2009 Google Searches. Michael Jackson, swine flu, Twitter and Facebook were among the most searched-for terms of the year, according to the latest statistics from search engines Google and Bing. Also in the top 10 were searches for Twitter, swine flu, the stock market, Farrah Fawcett, Patrick Swayze, the US car scrappage scheme, known as “cash for clunkers”, as well as reality TV stars Jon and Kate Gosselin, baseball player Billy Mays and Jaycee Lee Dugard.  – Telegraph.co.uk