How Jetstar is devouring Qantas

Forget any hope of a quick revival in business demand for those nice big "full service" Qantas seats -- the company has posted figures showing poor yields for the first quarter of its current financial year, while its low-fare arm Jetstar more than doubled in customers.

Forget any hope of a quick revival in business demand for those nice big “full service” Qantas seats.

Qantas this morning posted figures showing poor yields for the first quarter of its current financial year with a surge in Jetstar patronage giving it overall growth in passenger numbers. 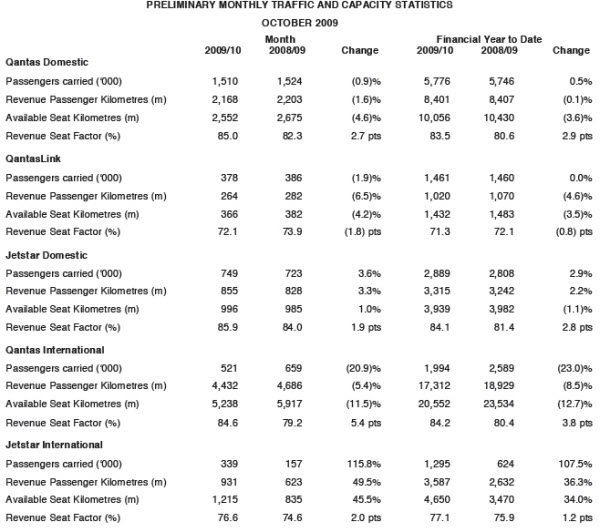 The group’s carriers (Qantas international, Qantas domestic, Qantaslink and the long- and short-haul versions of Jetstar) carried 6.2% more passengers in the three months to October 31 compared to the previous year.

But measured as revenue passenger kilometres the rise was a modest 0.7% reflected a skewing of activity in favour of down trading to its low-cost division and its generally shorter flight stages.

Qantas international carried –23.0% fewer passengers than the same quarter in 2008. That is a very poor performance considering its first quarter last year was already impacted by the GFC, and its corresponding quarter this year doesn’t provide any evidence that cheap seat deals lifted total activity for its full service long-haul flights.

But the Jetstar international figures more than doubled in customers.

The devouring of Qantas by Jetstar is also apparent in the domestic figures.

In this financial year, first quarter full service domestic customers rose only 0.5% for the trunk routes and were unchanged for Qantaslink.  But Jetstar attracted 2.9% more domestic passengers in the three months, during which it entered direct competition with the Qantas Cityflyer services between Melbourne and Sydney, in response to the Tiger Airways entry on the route.

Yields are sick. Qantas doesn’t provide guidance on how Jetstar tracked in terms of ticket prices, but in aggregate its three domestic brands were down –10.2% in yields for the quarter excluding foreign exchange.

On aggregate international routes the Qantas group yields were down by –24.2%.  These are bad results, and reflect the price dumping the airline used to stimulate demand earlier this year for flights that are only now working their way through the group’s revenue performance.

Sydney Airport: a noise annoys … at least till after the elections