Tips and rumours: Libs are getting personal

Trouble in paradise for Rupert Murdoch and Wendi Deng, Sunshine Coast Liberals descend into war, The Age signs up two big fish, and turmoil at the Advertiser.

Senior News Corporation figures in the US are openly discussing the unthinkable, that the marriage between Rupert Murdoch and Wendi Deng has broken down and the couple have separated. If Wendi  has left Rupert that means there will be two less children to be pushed into the inheritance pot joining four from his first two marriages. There’s supposed to be a trust that contains assets and shares for the four kids. There has been talk that the two children by Wendi were going to be made beneficiaries of part of that trust. But now?  Lachie sold News Corp shares last week and is spending money — $112 million on half of DMG Radio Australia, $23 million on a Bellevue Hill mansion in Sydney and now some media assets in the US, led by Hollywood Reporter according to the Financial Times. Elisabeth is building her Shine production company business in the UK, US and next year, Australia. James of course wants to run the family company. Prudence has bowed out and is not active in the media. (Given the nature of this tip, we approached News’s Australian corporate spinner Greg Baxter this morning for comment. He did not reply to our emails.)

If two new Liberals come in as a result of the by elections on December 5,  shouldn’t they have a say in party room vote?  Turnbull has been advised to hold off till then.

The internal Liberal battles are getting personal. Looks like the two Sunshine Coast Liberals (Somlyay and Slipper) are in outright war.

Return of the Entsch. Just when it looked as though it was safe to go back into the water here in Far North Queensland (inside the stinger nets of course) — who should rise from the primeval ooze but Warren Entsch — former federal LNP member for Leichhardt — and recently preselected LNP candidate for his old seat at the next federal election.

On November 21 in Mossman, Entsch revealed his grand plan to mark his political comeback … “I’m very excited by the idea of building a monorail from the Daintree River crossing to Cape Tribulation,” he enthused. “It would be absolutely iconic, unique.”

And ours, it seems, for just $360 million — give or take a few hundred cassowaries, spotted quolls, tree kangaroos and other desperately endangered species of fauna and flora inhabiting this world-heritage rain forest.

Happily the community meeting he convened to listen to this antediluvian, mind-numbing claptrap attracted just nine people. Ten if you count Warren.

The Age has signed two big fish — according to mediaspy.org’s The Spy Report — in Rafael Epstein and Tim Lester. It seems The Age has money for hiring now; a far cry from 12 months ago. But where are the staff pay rises?

A review has been going on for at least three months. And don’t get us started on newsroom resources … some days there are no (yes, none) general reporters. Has all the money gone to Epstein and Lester?

The launch of the good ship Clayton’s digital newsroom at SBS , i.e. the-digital-newsroom-you-have-when-you-don’t-actually-have-a-digital newsroom! Anyway crack that champagne bottle over that engineless hull — the SBS analogue news ship is about to set sail! She’ll have to sail as there’s no bloody motor, skipper … skipper? Where’s the bloody skipper? Here’s to a job-bloody-well-not-done!

Since teachers apparently aren’t allowed to talk to the media about internal disputes, if the education department wants, it can pointlessly string out the issue.  A few thousand dollars for teachers isn’t a lot, so maybe they think they can just ignore it.

Newsagents are pretty upset about The Advertiser taking over their databases and forcing them to take the prices they’re given during specials. See here. You certainly won’t read much about it in The Advertiser or The Australian‘s Media section.

A rumour the newsagents have started is that an SA version of The Age might start but when in Adelaide on Thursday and Friday, Fairfax CEO Brian McCarthy said this was not the case, but they could set a version of WA Today and Brisbane Times in the future.

Apparently this is happening all over country SA, newsagents being pressured into giving out the contact details of their own delivery rounds so the ‘Tiser can instead be the ones to charge for delivery. Desperate times, desperate measures …? Wouldn’t have thought there’d be much extra profit in it for them. 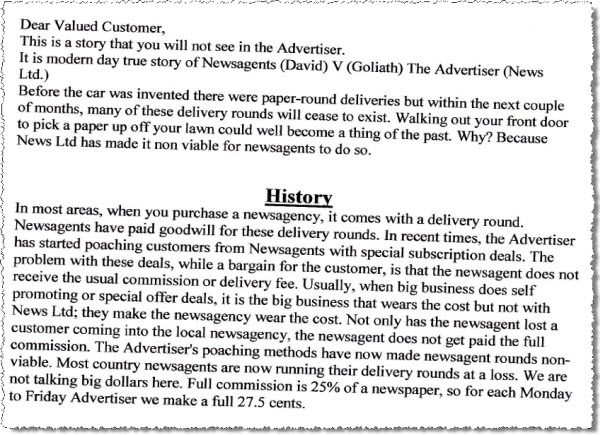