Joe’s the favoured way but …

Centrebet has Joe Hockey at $1.35 to be new leader of the Liberals, Annabel Crabb makes her ABC debut, and Tiger Woods is the biggest story in the world.

Hockey favourite but still backable. The bookmakers on Friday had Joe Hockey paying $1.50 for a $1 to be leader of the Liberal Party when the next federal election is held. At midday today he was $1.35 at Centrebet, which would be stealing money if you believed the almost unanimous predictions by the press gallery pundits that Malcolm Turnbull will be ousted at tomorrow’s party meeting.

Clearly some people still have their doubts about what will happen and I am in that category. I cannot believe that an ambitious man such as Joe Hockey would offer himself up for sacrifice to appease people whose views he does not agree with. Still, sensible people have done silly things in the past. Just look at Turnbull. He was stupid enough to challenge Brendan Nelson for the job in the first place.

While the bookmakers are offering prices about other candidates as well, if there is a party room ballot tomorrow there will only be three contenders. Taking out the profit margin provides the following Crikey Liberal Leader Election Indicator:

Tomorr0w’s other big meeting. The board of the Reserve Bank will meet tomorrow to decide if there should be any further change in official interest rates and opinions are almost evenly divided between no change and a quarter of one per cent rise. 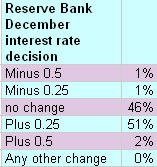 The ABC gets serious. First day today for the ABC’s new written word political correspondent. Annabel Crabb leaves behind the Sydney Morning Herald to provide her commentary on the ABC News website where I am sure she will continue to be amusing while having more scope to show that she is a first-rate political analyst as well as a humourist.

Readers of internet news sites around the world have no doubt about what is the biggest news story of the day. Forget about Iran and nuclear weapons, US health-care proposals, more troops for Afghanistan and the new financial crisis caused by Dubai — Tiger Woods and his relationship with his wife is a clear winner.

On radio, television, newspapers and the internet, this is surely the most covered minor traffic accident in history. And the people are lapping it up. This what I found in the last hour as I surveyed those “Most Popular” reports on internet news sites:

SackWatch 10: place your bets before the deluge