A new Morgan poll says it's still the economy and environmental issues that Australians think are the most important, soccer match-fixing in China, and Thailand takes the stealing of religious artifacts very seriously.

Forget about boat people, it’s still the economy, stupid. A fascinating study out from pollster Roy Morgan on what Australians regard as the important issues for their own country and the world as a whole. And there’s not much joy in it for those beleaguered Liberals who thought hammering away at policies on boat people might revive their fortunes. While there has been a small increase from a small base in immigration matters, it is still the economy and environmental issues which Australians think are the most important both at home and abroad. 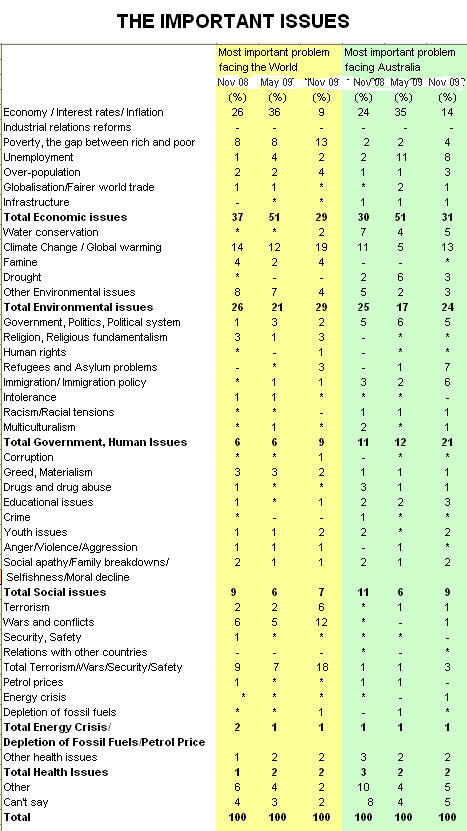 Morgan finds that as a World problem Economic issues are down 22% since May 2009 to 29%. This is almost back to pre-GFC levels of 24% in May 2008. In particular significantly fewer Australians regard Economy/ Interest rates/ Inflation (9%, down 27%) as the most important problem facing the World.

Other issues that Australians consider important facing the World include Terrorism and Security issues 18% (up 11%), Government/Human Issues, 9% (up 3%) and Social Issues 7% (up 1%).

The most significant falls since May have been for Economy/ Interest rates/ Inflation (14%, down 21%) and Unemployment (8%, down 3%) — even though many economists still say Unemployment has not yet peaked.

Three issues have clearly emerged as more important problems facing Australia since May. The most significant is Climate Change/ Global Warming (13%, up 8%). Also increasing are the closely related issues of Refugees and Asylum problems (7%, up 6%) and Immigration/ Immigration policy (6%, up 4%).

A boycott is in order. The media should join as one and boycott the world’s most popular boring game – test cricket. Australian cricket administrators are just going too far with the outrageous restrictions they want to place on coverage of matches in Australia this summer. According to Associated Press, Cricket Australia has demanded the right to see the agencies’ lists of clients and to veto any they decide should not receive pictures and text coverage of the tests against the West Indies that start today.

It also wants to impose limits on the number and frequency of text and photo updates for Web sites and on the duration of images in photographic archives. Along with Reuters and Agence France Press, AP has decided not to provide any coverage. Coverage of the monotonous plodding on the field of play over five days will not be missed. Now, if only local newspapers would join in the boycott .. that would make it a summer to look forward to.

This sporting life. Soccer is rapidly achieving the same status as horse racing when it comes to a little bit of corruption and market manipulation. If you asked a hardened race goer if every horse always tried he would laugh at you as he continued with the vital task of sorting out the goers from the dead ‘uns. Now that same analysis has become a vital consideration for sports bettors as news increasingly comes in from around the world of football match rigging.

The latest scandal is courtesy of China where Chinese police have detained at least four people on suspicion of match-fixing and gambling in a nationwide crackdown on soccer corruption. Newsagency Xinhua reports the Ministry of Public Security in the capital city of Liaoning province saying they had detained a number of former players, soccer officials and club officials on suspicion of “manipulating domestic soccer matches through commercial bribery.”

Would the Buddha approve?Australia’s law-and-order loving politicians and police have a way to go yet to catch up with their Thailand peers. The Thai deputy national police chief Jongrak Juthanond this week threatened drastic action against thieves who steal religious artefacts from temples in Ayutthaya.

Over the past fortnight, several temples in Ayutthaya reported artifact thefts and the beheading of Buddha images, prompting Chief Juthanond to war: “The use of violence may be required. The sight of thieves lying dead next to the beheaded heads of Buddha images could be possible.” 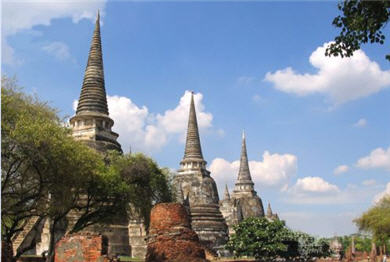 isnt there something wrong with the years cited in the morgan thing? it seems to be all about 2008. or have i missed an important clue/

No Richard made a balls up. The first figure is Nov 07. I will replace it shortly