Scoop of the year? Hot off the presses from today’s NT News is the scoop that pop star Robbie Williams is looking to buy a house in the Northern Territory… to hunt for UFOs: 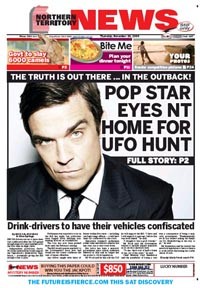 The hot tip comes via one Lew Farkas, the owner of the Holiday Park in Wycliffe Well in Central Australia:

“A mate of his came and stayed here and was telling me how Robbie was right into UFOs and was a real buff on the subject,” he said.

“He said he would let him know about Wycliffe Well and the UFO element.”

Mr Farkas said his property – on the market since last year – would be perfect for Williams.

“I haven’t heard from him but if his mate has talked to him then maybe he’s considering Wycliffe,” he said.

ABC runs trivia again and again. The ABC may no longer be first with the news: its news now comprised almost entirely of the same easy-to-get and dropped-on-your desk stories that commercial radio and TV cover too. It must, however, have the record for presenting old news as new news.

Having been stupid enough to select the topic of Arts & Entertainment on ABCNewsMail (the ABC’s online subscription news alert service) because I could find no subject heading to get news alerts concerning the media industry, I guess I deserved the trivia it delivered: the same alerts of  “Garrett sings again” and “Bardot autograph pays for fan’s operation” every day now for over a month! — An anonymous Crikey reader

Tony and Maureen Wheeler get their own centre. Melbourne’s Centre for Books, Writing and Ideas will be named after two of Australia’s most successful publishers, Tony and Maureen Wheeler. Arts Minister Lynne Kosky today announced the creation of The Wheeler Centre: Books, Writing, Ideas. It has been named after the founders of the Melbourne-based Lonely Planet travel guides. The Wheelers now devote much of their time to philanthropy through their foundation, Planet Wheeler. They have made what the Government calls “a substantial donation” to the new Centre. The amount of the endowment is not being disclosed. — ABC Online

Nine axes Perth and Adelaide versions of A Current Affair:

The WIN Corporation is axing the local versions of its programme A Current Affair in Perth and Adelaide, blaming the tough economic climate on the decision.

The locally-produced shows will wrap up this Friday at the end of the TV ratings season and will then be replaced by a national version hosted by Tracey Grimshaw.

Before he retires tomorrow, Channel 7’s veteran newsreader Ian Ross has been humiliated by Triple J who defaced an ad with his farewell letter to viewers. The photos, posted on the Triple J TV Doctor’s Twitter page this morning, capture an unknown woman holding up the full page newspaper advertisement starring Ross whose eyes have been deliberately cut out. 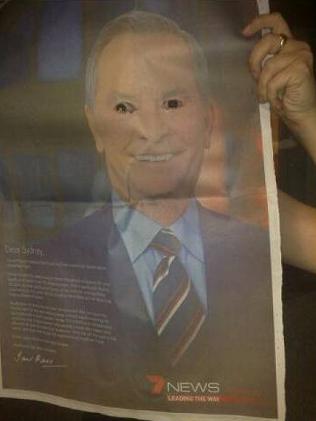 The three biggest magazine publishers in the country — Hearst, Time Inc and Conde Nast — are investing in a separate company that is being touted as an “iTunes for magazines.” Or a Hulu for magazines, if you prefer. It would be a online storefront for digital versions of these publishers’ magazines (Esquire, Time, Vanity Fair, etc) that you could read on your computer or smartphone. The site would also try to sell print subscriptions to readers.

But if these publishers want to make money, they can’t sell a product (online news) that’s already free. Does that mean we’re about to see a deluge of paywalls across magazine websites?

The BBC has today said it has “no intention” of charging for online news, in a declaration that is unlikely to please James Murdoch and his father Rupert as they prepare to start charging for News Corporation content on the internet.

… So is blogging back, while microblogging is on the skids? 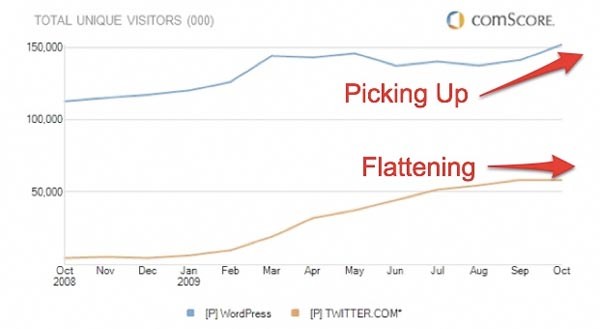