Australia pardons a couple of turkeys

The day before Thanksgiving is notable for an excruciating American tradition: the presidential turkey pardon. Yesterday, Australia gave it a local spin.

Turkey pardon #1: The leader of the Opposition was pardoned by 48 of his Liberal Party colleagues. Meanwhile 35 of his “colleagues” voted against keeping the Turnbull turkey alive.

Turkey pardon #2: Mid-level treasury department officer Godwin Grech was pardoned by a Senate privileges committee for knowingly and deliberately giving false or misleading evidence to another Senate committee, despite its finding that “this is one of the worst cases of improper interference with the operations of a Senate committee that this committee has examined”. 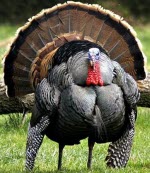 The point about the annual turkey pardon at the White House is that while one special turkey survives, tens of millions of other dead turkeys are being prepared to be devoured.

After their pardons yesterday, the real question remaining about the fate of Malcolm Turnbull and Godwin Grech is whether they are special turkeys or just like all the others.

OK, I admit it. The conspiracy theorists were right…

Despite Heat and Thunder, Big Bash makes a small splash

Why hasn’t Goblin Wretch been charged?

Because the Goblin would have a lot more to say about BOTH side of politics.

It was all so predictable.

Wasn’t there a parallel federal police inquiry into this whole affair –
did anything come out of this?

Regardless of possible criminal charges, Goblin Wretch compromised the basic relationship between the public service and politicians. He provided a partisan service and, on the face of it, channelled privileged information in bulk for years.

When are you going to stop hiding, Gob?