Publishers of the Denver Post and the Dallas Morning News may pull some of their stories from Google Inc.’s news site, a move that would emulate News Corp.’s Rupert Murdoch.

Twelve journalists were among 46 people murdered yesterday in the Philippines in what is thought to be the greatest loss of life by news media in a single day. Several of the victims were beheaded or mutilated in the massacre carried out by a huge force of gunmen.

The Washington Post is closing its bureaus in New York, Chicago and Los Angeles at the end of this year, according to a memo obtained by POLITICO … it looks like the Post will increasingly cover events outside Washington — whether across the country or the world — through the prism of how it affects Washington.

What will it take to get paid online content to work?

Rupert Murdoch has threatened to dump Google and is flirting with Microsoft over selling his content to their upstart Bing search engine. Steven Brill’s much-hyped Journalism Online has a network of more than 1,200 publishers ready to collaborate on paid content. And Time Inc. is considering an iTunes-like application to charge for its magazines’ content, either via subscription or on a “per song” basis. What else has to happen?

The Italian edition of Rolling Stone has named Prime Minister Silvio Berlusconi its “rock star of the year,” paying tribute to his “lifestyle worthy of the greatest rock star.”

A glimpse of Google without News Corp: no great loss:

Here’s a search for “lieberman public option” and “wall street journal,” but with results from WSJ.com and FoxNews.com filtered out — in other words, what Google would return if they weren’t allowed to index News Corp. pages.

All but the top two results — irrelevant HuffPo stories — show you exactly what Lieberman said in the Wall Street Journal. And would conceivably show you a link to the WSJ. So, no big loss. 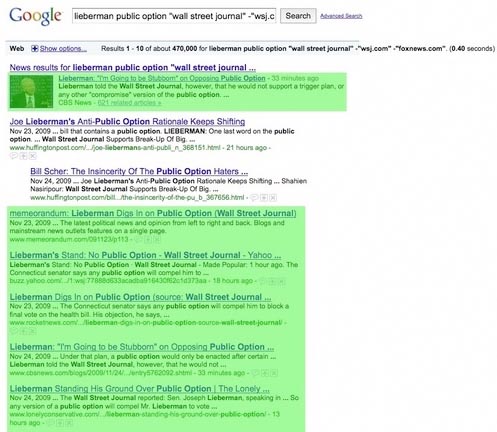 The Washington Post launched its America’s Next Great Pundit contest to identify new voices and the winner is . . . a middle-aged white guy who is an executive for a liberal non-profit. The paper announced that Kevin Huffman will get a weekly column for 13 weeks at $200 a pop as the winner of the contest, that included around 4,800 contestant.