Australia’s biggest polluters will enjoy vast windfall gains under the compromise offered by the Government to extract support from Malcolm Turnbull for the passage of its CPRS.

Australia’s biggest polluters will enjoy vast windfall gains under the compromise offered by the government to extract support from Malcolm Turnbull for the passage of its CPRS.

As expected, big polluters, the coal mining industry and electricity generators will all receive additional and extended compensation that will inflicted more than three-quarters of a billion dollars on the Budget between now and 2020.

The core elements of the compromise are:

The total cost of the compromise package $1.1 billion over Forward Estimates and $6.5 billion to 2020.  Compensation for households will be reduced by $910 million over FEs and $5.8 billion to 2020.  The fuel excise offset remains in place. This is a table of what it will cost the Budget. 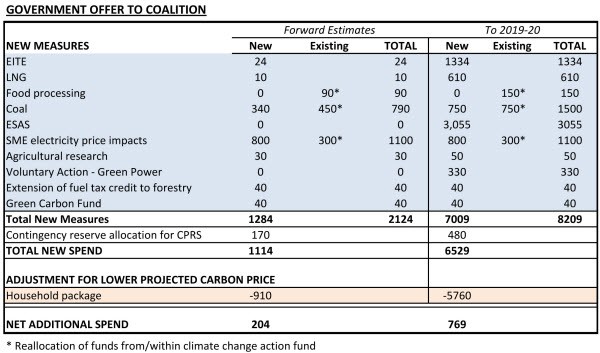 The government’s compromise package is more or less as expected — a lot of extra money for big polluters such as the LNG industry, electricity generators, and coal miners, funded by households.  In effect it is a giant switch of assistance from households to business, with the intention of ensuring electricity prices don’t rise by that much in the first place.  Electricity generators have done very well, with a 75% increase in assistance and the possibility of loan guarantees and other props for their aged, polluting facilities, but it is still far, far short of the tripling of assistance they have been demanding, with the threat of turning out the lights if they didn’t get it.  Coal miners will not be entirely happy either, but the “gassiest” mines will now get 60% of their permits free.

It also covers nearly all of the bases identified by the coalition, including help for the food processing industry.  It doesn’t go near the quantum of assistance at the heart of the coalition’s demands, but it goes a damn long way towards it — which is why Malcolm Turnbull is currently trying to convince his party room to accept the deal.

As for the environmental impact, well, forget about that.  The CPRS in yesterday’s form would have done nothing to curb Australia’s emissions, and this won’t either.  That, of course, is not the point.  Just be pleased it’s only ripping $770 million out of taxpayers’ hands over the next 10  years and handing it to the dirtiest whingers in the country.

This has been the worst policy process in Australian history, and it is likely to climax with the Labor and Liberal parties agreeing to hand over still vaster sums to rent-seekers, opportunists and blackmailers.

The carbon tax pitch: call it what it is — a pollution tax

There IS something rotten in the state of Denmark (AKA Australia). Why do we let the bastards screw us so relentlessly? We just had a massive jump in electricity prices in WA. Looks like another one is on the way and for what exactly?

Why bother? This is all about symbolism and wedge politics. Once again, the public interest comes last and (most of) the media fails the public by reporting the story from a tactical rather than a policy perspective.

You just can’t be too cynical when it comes to climate change politics in this country. It raises short-termism to new heights, or depths.

I do feel sorry for Turnbull, though. He has the misfortune of being in charge of a party, that like the Republicans in the US, has been taken over by the lunatic right-wing fringe.

If I were him I’d leave them to it and start a new Liberal Democratic party.

If this goes through I will burst into tears….in fact I already have knowing that it more than likely to pass. I feel sick to the stomach and cannot believe they have allowed the big polluters to win – yet again…just disgraceful.

DENISE – I will too! I think of what the planet will probably be like when my grandkids(ages 23-7) have their children, and I feel sick – really sick, heart sick, that the ALP has allowed itself to be ‘done over’ and they’re going to cop the hardship and decaying planet! All the bullshit leading up to the ’07 election? I fell for it too! However, I could never vote for the other mob???

I hope that the Coalition don’t agree, that the Senate votes against it, and Rudd calls a double dissolution; with the result being, that more Greens are elected. Our last hope now! It’s very sad, and I’m bloody angry as well! Bastards!

Hmm. This CPRS has been rotating like a charcoal chicken over the coals for a while now and its rather obvious that all we’re left with is pure carbon dinner.

BUT – What did anyone expect? It is plainly obvious the impetus was to pass something before Copenhagen, because Rudd, being the internationalist that he is wants to pre-empt this sucker, even if it is a turkey, and he wants to put any trussed up white meat on the plate for the global community to dribble over.

Isn’t it an essentially good thing at least in the long term, that compromise has been made, greenie shafting has been had, and legislation will maybe pass? Because in the future this CPRS thing will hopefully going to be cooked into something serious by the reality of global warming. One might be happy some sort of legislative framework gets through and it’ll be fine tuning the feathers that will be the hard part of making this CPRS sting like it ought to.

We know its a turkey, but better a turkey now than in 10 years time. It’s thanksgiving soon folks. And maybe the US (who really matter) will reciprocate with a CPRS turkey of their own. But at least we can say we cooked it badly first.