Beecher: the choreograph of the commentariat

Synchronised indignation has been a trademark feature of the Australian media commentariat for years, writes Eric Beecher: the past week's episode started with a stirring landmark speech about climate change by the Prime Minister at the Lowy Institute.

Synchronised indignation has been a trademark feature of the Australian media commentariat — conservative and progressive — for years.

It is a choreograph that occurs almost weekly and, like any self-respecting soapie, the script hardly ever changes. It goes like this: “issue” or “event” emerges in the news; like-minded commentators marshall a consensus view; keyboards rattle; out pops a white-labelled opinion package that rarely deviates from a narrow and highly predictable theme.

The past week’s episode of this vaudevillian tradition started last Friday with the “event” — a stirring landmark speech about climate change by the Prime Minister at the Lowy Institute, which included a scathing attack on climate deniers:

It is time to be totally blunt about the agenda of the climate change sceptics in all their colours … It is to destroy the CPRS at home, and it is to destroy agreed global action on climate change abroad, and our children’s fate — and our grandchildren’s fate — will lie entirely with them … They are betting our future, the future of our children and our grandchildren, and they are doing so based on their own personal intuitions, their personal prejudices and their deeply ingrained political prejudices.

The choreograph of the commentariat — in this case the Conservative wing — cranked up within hours. First out of the gates, with customary subtlety and impeccable sourcing, was Piers Akerman in the Daily Telegraph:

Rudd is, as News International chairman Rupert Murdoch has recognised, delusional … He is dedicated to putting up the cost of everything, when no other nation is doing so, in a useless bid to garner world attention and feed his overwhelming vanity … He hopes he, the extremist Left and the darkest Greens can terrify us into supporting a tax that will kill the economic future for generations of Australians … He has resorted to an appeal for mass hysteria and must be ignored in the name of common sense.

Never have I heard such a mad speech from a prime minister as the one Rudd gave on Friday at the Lowy Institute … Your claim that I argue from just a “vested interest” is a despicable lie … what threatens my children’s future is not my scepticism but your mad plans to waste billions of dollars on a threat that seems not to exist … The real “political cowards” are those of your own ministers who know your global warming plan is a hoax fix to a hoax scare, but dare not speak.

Following up the field the next day was Miranda Devine in The Sydney Morning Herald, who arrived — coincidentally of course — at an identical conclusion:

If he had any shame, the Prime Minister would be mortified to be associated with such a hysterical, undergraduate piece of ad hominem hyperbole. History will record his embarrassment and the debasing of his office … As the public cools towards this new energy tax, politicians, green groups and other alarmists with the real “vested interest” in this debate are stooping ever lower in their attempts to shun dissenters.

The words and the phrases in these columns, like so many on other subjects by the synchronised cabal on both sides of the ideolological fence, are no different to the talking points memos prepared by spinners for politicians to co-ordinate their manufactured messages. And if the members of the media cabals don’t literally consult each other to line up their views, it’s only because their groupthink (right or left) has been so carefully honed for so long that collusion is completely unnecessary.

In a choice between original thinking and club membership on the big issues that affect the world, Australian commentators of left and right adhere to the party line every time — down to last “mad”, “delusional”, “hysteria” and “despicable”.

Especially on climate change and the need, or otherwise, to buy an insurance policy. 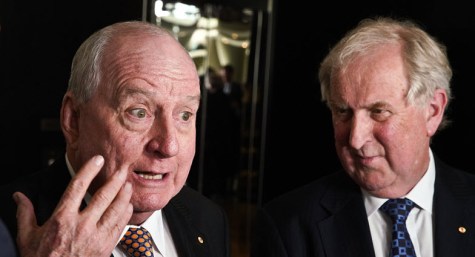 Spot on. Substance is for bores. And no Wildebeest ever felt comfortable about originality.

I bet that some of these conformists on each side of the global warming frenzy secretly harbour doubts…and their nearest and dearest are sworn to secrecy. Divorce could spark some amusing revelations…some possibilities: Mrs Bolt- “the sod sold all our waterfront property”. Mrs. Hamilton: ” He bought all Bolt’s sand dunes”.

The best brown-nosing from dear ol Piers. Must be an acquired taste.

Thanks, Crikey, for striving to bring us diversity amongst opinion pieces and depth in factual ones. Unfortunately, the message from the right seems, as you have lamented, to emanate from those who form their opinions in a factual void.

The void dwellers are outnumbered… I live in hope that the three senior journalists quoted in this article and those who stand in their shadows will produce quality (read: rational, fact-based) argument and Crikey can resume normal broadcasting, with contributions from a reformed David Flint, and the like.

Thanks, Rupert, for your contribution to quality journalism.