Political love birds, a busted Coalition and a paranoid Premier 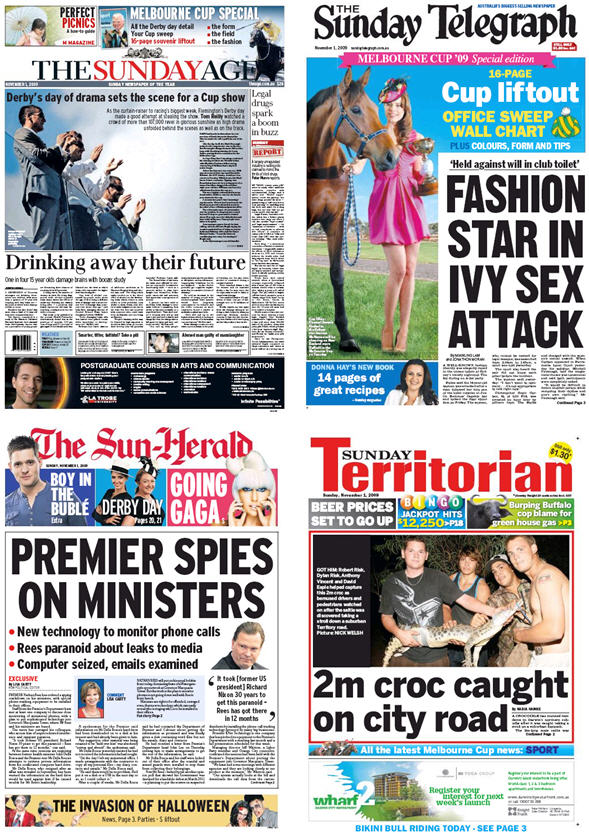 Tamils send a message to Rudd – Most of the Sri Lankan asylum seekers in a stand-off with Australian authorities off the coast of the Riau Islands have been living in Indonesia for years, providing the Rudd Government with leverage to convince Indonesia to take them back – Sydney Sun Herald

Rees spies on ministers – Premier Nathan Rees has ordered a spying crackdown on his ministers, with special phone-tracking equipment to be installed in their offices. Staff from the Premier’s Department have met at least one company to discuss close monitoring of ministerial phones, with a plan to put sophisticated technology into Governor Macquarie Tower, where Mr Rees and his ministers are based – Sydney Sun Herald

Just 30 per cent of voters back her, so how low can Anna Bligh go? – Voter confidence in Premier Anna Bligh has plummeted to new lows, according to a Sunday Mail poll taken in the past few days. The LNP has extended its lead over Labor on a two-party preferred basis to 55-45, and for the first time Opposition Leader John-Paul Langbroek is seen as a genuine alternative, running neck and neck with Ms Bligh as preferred premier – Brisbane Sunday Mail

Coalition means nothing to Barnaby Joyce – Barnaby Joyce’s deliberate decision to take the Coalition to the precipice today throws down two challenges to Malcolm Turnbull – neither of which in his weakened state he can meet. The first of Joyce’s demands is that Turnbull shut down those Liberal critics who keep attacking him. The second is that Turnbull withdraw from his negotiations with the Government on the Emissions Trading Scheme – Sydney Sunday Telegraph

First-home grant to cut out at $750,000 – The first-home owners grant will be restricted to people buying homes worth up to $750,000 from next year amid fears the market is overheating. Each state and territory government would be allowed to cap the ”enormously successful” grant, federal Housing Minister Tanya Plibersek confirmed yesterday – Sydney Sun Herald

$600,000 limit for home grant – Many home buyers will no longer be able to obtain the first home owner grant following a State Government decision to restrict the scheme to houses valued at under $600,000 – Melbourne Sunday Age

Meet Labor’s latest lovebirds – Just as it did with prime ministerial aspirant Bill Shorten, the private life of Greg Combet – another former union boss and rising Labor star – is beginning to encroach into his political career. With a whispering campaign flourishing, Mr Combet, the frontbencher and former ACTU secretary, and West Australian MP Melissa Parke were yesterday forced to confirm their fledgling romance – Sydney Sunday Telegraph

Hockey, Abbott lunch’s mystery menu – One is a disgraced former MP who wants to return to politics in the future. Another once had the ear of the prime minister but left politics for her family. The other two are hardheads, each keen to roll their leader and take the top job. So can we honestly believe that lunch a week ago at Grappa, a discreet Italian restaurant in Leichhardt, between Joe Hockey, Tony Abbott, Ross Cameron and Jackie Kelly was really just a catch-up between mates? – Sydney Sunday Telegraph

PM’s computer revolution in need of reboot – Kevin Rudd’s digital education revolution has barely touched the lives of Victorian students, with new figures showing only two schools in the state have achieved the Federal Government’s ultimate target of one computer for every senior secondary student – Melbourne Sunday Age

Frontbench ears burning with Big Brother on line – Lisa Carty in the Sydney Sun Herald explains how a plan to monitor phones in the ministerial monolith that is Sydney’s Governor Macquarie Tower is not going down well with Nathan Rees’s front bench.

Cardboard Kev – Josh Gordon in the Sunday Melbourne Age reckons that one of the few things Rudd is yet to show is political courage. This is not to say he lacks the capacity, just that he has not yet backed his tough words with brave decisions, apart from (arguably) his response to the global financial crisis.

Boycott threat for Afghan poll – Abdullah Abdullah, the Afghan presidential challenger, was reported yesterday to be on the verge of pulling out of next weekend’s election run-off – Melbourne Sunday Age

I hate whale meat, Japan’s PM confides – Japan’s Yukio Hatoyama has revealed he dislikes whale meat, a newspaper has reported in an unusual confession for the prime minister of a country that defies Western criticism of whaling – Sydney Sun Herald

Burping buffalo kill call to save planet – A scientist says the Territory should cull its gassy buffaloes to claim the carbon credits. Charles Darwin University Professor Stephen Garnett said buffaloes belched out, on average, a tonne of greenhouse gasses every year – Sunday Territorian

Green tax hikes beer price – Australians will pay an extra $3.36 for a slab of beer and 14c more for a can of Coke under a national drink container recycling scheme, manufacturers say – Sydney Sunday Telegraph

Dirty tactics suspected in container recycling battle – Some of of Australia’s biggest companies have been accused of dirty tactics in the battle over national container deposit laws. As federal and state environment ministers prepare to meet this Thursday, it appears that companies or groups fighting container deposit laws have commissioned an aggressive online survey designed to influence public views – Melbourne Sunday Age

Are we really a nation of bingers? – Claire Harvey writes in the Sydney Sunday Telegraph that the race that sloshes the nation on Tuesday, Australians will toast our Melbourne Cup heritage by raising a glass or 20, in the glorious tradition of collective binge drinking.

Booze putting teen brains at risk – A generation of Victorian teenagers are drinking themselves into oblivion, with more than a quarter of 15-year-olds bingeing until they black out – the point at which brain damage is likely to occur – Melbourne Sunday Age

Street drinkers told: the party’s over – A new law banning public drinking in Fitzroy, Richmond and Collingwood – aimed at curbing drunken violence and crime and breaking up congregations of Aborigines on Smith Street – has been passed by the City of Yarra under pressure from the State Government – Melbourne Sunday Age

Housewives turn to cocaine abuse in Queensland – Cocaine use in Queensland has filtered down from the socialites to suburbia, with a new report showing “stressed-out housewives” in some of the southeast’s more affluent suburbs have become regular users – Brisbane Sunday Mail

UK sacks top drug adviser – Britain’s top drug adviser has been fired after saying that marijuana, ecstasy and LSD are less dangerous than alcohol. David Nutt’s comments have embarrassed the British Government, which toughened the penalties for possessing marijuana earlier this year over the protests of many prominent British scientists – Melbourne Sunday Age

Charities turn away homeless – Overwhelmed charities in Sydney are turning away dozens of homeless people a night. Mission Australia spokesman Paul Andrews said its 14-bed Liverpool Centre – one of its four Sydney centres stretched well beyond capacity – had been issuing people with swags as a ”last resort” – Sydney Sun Herald

Secretary has paid lawyers $11m and rising – A former secretary has paid her lawyers $11 million chasing a divorce settlement with her ex-husband worth hundreds of millions. In what has become Australia’s most expensive divorce battle – the woman, Mrs X, has received $5 million as a partial payment from her husband’s vast wealth – and plans to spend it on future legal costs – Melbourne Herald Sun