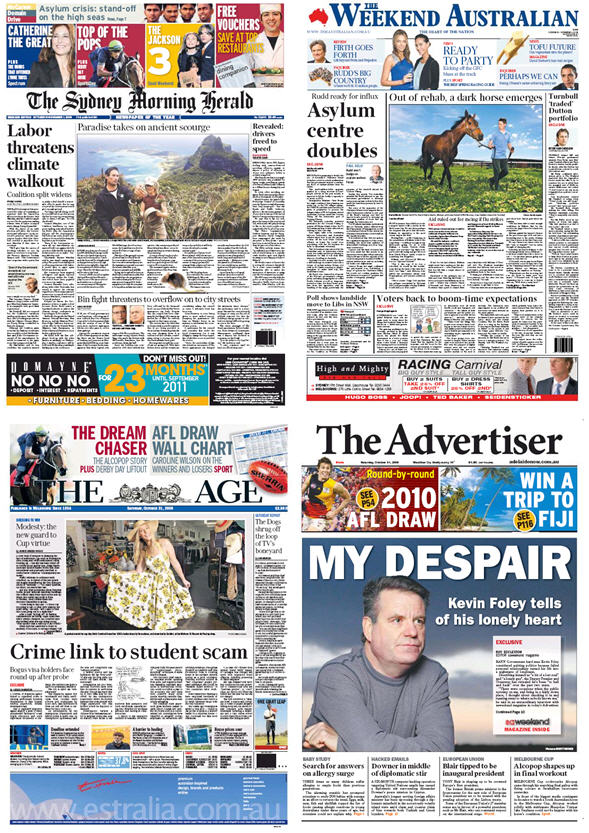 Voters back to boom-time expectations: report – Australians are “over” the global financial crisis and are again ready to worry about the things that troubled them in the last boom – failed state government services. The growing confidence in the economy, revealed in the latest Ipsos Mackay Mind & Mood report, has placed the Rudd government in a better position than it was a year ago, when many voters feared a recession was coming and were troubled by Labor’s excessive cash handouts – The Australian 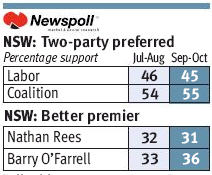 I’m worth every cent I’m paid, says Nathan Rees – Premier Nathan Rees yesterday described his pay rise as “uncomfortable” but still feels he is entitled to it – Sydney Daily Telegraph

Liberals resurrect Howard policies on refugees – As the 37th boat load of asylum seekers this year was taken to Christmas Island yesterday, the Opposition prepared to return to the border protection policies of the Howard government – Sydney Daily Telegraph

Ready, willing and waiting for the next boat out – The Sydney Morning Herald reports from Sri Lanka on those eager to try and reach Australia

Malcolm Turnbull ‘traded’ Peter Dutton’s health portfolio – Veteran Liberal MP and former Howard government minister Fran Bailey says Malcolm Turnbull offered her Peter Dutton’s shadow health portfolio shortly after Mr Dutton lost a preselection contest for a safe Queensland seat. Ms Bailey confirmed information given to The Weekend Australian that the Opposition Leader made the offer to try to convince her not to retire from her marginal seat of McEwen, outside Melbourne, but added: “I don’t want to say any more, I regarded it as a private conversation.” – The Australian

China push to heal rift in ties – Vice-Premier Li Keqiang, one of China’s top two emerging leaders, yesterday delivered in Sydney “a blueprint for Australia-China relations” that would sideline recent rows – The Australian

Jump-start for Aboriginal education at ‘tough-love’ school – Indigenous children will start school at 7.15am and work until late into the afternoon under a radical classroom program to lift them up to national education standards, The Weekend Australian can reveal. The new Cape York Aboriginal Academy, underwritten by the federal and Queensland governments, is an exercise in tough love due to be rolled out in the far north Queensland townships of Aurukun and Coen next year.

At the Rudder of a ship going nowhere – Laurie Oakes in the Sydney Daily Telegraph reckons the PM has taken a hit over the asylum seeker issue this week. Probably a big one. The longest honeymoon in Australian politics may be ending. Labor strategists are bracing themselves for a dive in the next Newspoll.

Captain Rudd’s preferred course – a little to the right – Peter Hartcher in the Sydney Morning Herald explains the electoral arithmetic behind the actions of a Prime Minister who s a very methodical politician, and a very strategic one.

Gracious Rudd turns grubby – Annabel Crabb in the Sydney Morning Herald remembers an earlier gracious PM who this week, having snarled himself somewhat in his own net of tough rhetoric, spent much of question time lashing out at his opponents, often in unnecessarily caustic and personal terms.

No infrastructure unless you borrow – If you think we should be spending a lot more on economic infrastructure, you can’t be chicken-hearted about government debt says Ross Gittins in the Sydney Morning Herald

World hits home – Shaun Carney in the Melbourne Age how, courtesy of the boats carrying Sri Lankan asylum seekers in the direction of Australia in the past few months the rest of the world seems to have re-entered Australian politics

Careful, Big Brother is editing you – Lenore Taylor in The Australian examines how public servants are examining whatp MPs send taxpayers in the mail.

Coming Ruddslide is hardly a good omen – George Megalogenis in The Australian finds Labor is better placed now than it was a year ago. The public is almost ready to give Kevin a second term to deliver what he promised in his first. A Ruddslide would vindicate everything the Prime Minister stands for. Which is OK if the message he takes from another victory is the public wants him to implement his program. But if he sees it as a personal mandate for micro-managing – for government run by paperwork and photo opportunity – it will risk stalling his program.

Health plan gains support in House – House Democrats on Thursday closed in on the votes they need to pass sweeping healthcare legislation, as party leaders introduced a 1,990-page bill designed to guarantee near-universal coverage for the first time in the nation’s history – Los Angeles Times

Thanks for the ride … and billions in fees – When Macquarie’s satellites were launched, investors happily strapped themselves in. Now the funds are falling to Earth, write Stuart Washington and Michael Evans in the Sydney Morning Herald

Macquarie on the hop, with core profits under pressure – Malcolm Maiden says in the Melbourne Age that the profit result was the product of some big positive and negative financial swings, all associated one way or another with the crisis. They will be less evident from here on — and as they fall away, a decline in Macquarie’s underlying profit is going to be exposed

Labor threatens climate walkout – The Rudd Government has questioned the value of continuing to negotiate with the Opposition after its Leader in the Senate, Nick Minchin, said the Coalition might not vote for the emissions trading scheme even if Labor accepted every change being demanded – Sydney Morning Herald

Liberals clash over climate stance – The Opposition is again in a shambles on climate change, with two senior frontbenchers at odds over the party’s emissions trading stance – Melbourne Age

House prices leap $6000 a month – A typical Melbourne house now costs just under $500,000 after surging $6000 a month since December. The rate of increase is the fastest in the nation, jumping 12.6 per cent in the first nine months of the year – Melbourne Age

The Hyde of it: penthouse sale seeks to top $20m – Sydney Morning Herald

Drinkers in a fizz over bubbly war – Woolworths-owned Dan Murphy’s and the Coles-owned Vintage Cellars and First Choice stores have for weeks engaged in a ferocious day-to-day battle to win over the hearts, minds and palates of sparkling wine and imported champagne drinkers – Melbourne Herald Sun

Move-on powers plan for Fortitude Valley and CBD – Police want people caught misbehaving or with a violent record to be banned from the City and Fortitude Valley. The call is part of the police submission to a parliamentary inquiry to reduce alcohol-fuelled violence – Brisbane Courier Mail

Chief justice rules out a repeat of Kerr’s err – The nation’s top judge would not give legal advice to the Governor-General, Quentin Bryce, about dismissing the Prime Minister in a constitutional crisis and says no one in his position ever should – Sydney Morning Herald

Revealed: drivers freed to speed – Previously secret RTA figures dealing with camera-detected speeding offences appear to expose a policy of allowing a 10per cent tolerance before a penalty is applied – Sydney Morning Herald

Going beyond the boundary – The Phillip Island case, in which two 18-year-old women were allegedly gang raped, has (once again) raised community alarm – indeed, outrage – about the spectre of out-of-control young footballers preying on women – Melbourne Age

What a shame that disgusting old goat Paul Kelly and other journalists keep linking border security with refugees, they are totally unrelated to each other and making grubby “deals” with non-signatory countries to lock up refugees for us in their hell holes funded by us is highly illegal, immoral and grubby indeed.

Asylum seekers have legal rights and Kelly’s whining and Rudd’s stupidity does not take them away.

The whole thing is stupid, they cannot claim asylum in Indonesia. That is the fact as we know it.

And the group we turned away in 2001 are now coming here in a terrible state after being jailed by us in Lombok all these years so the Sri Lankans might get here by 2018 and we would be illeglly jailing them in Indonesia for all those years while pretending they are safe.

It’s depraved and I will forcibly gut the next journalist who links border security with refugees.

The convention is designed so signatory countries are forced to open borders, full stop.