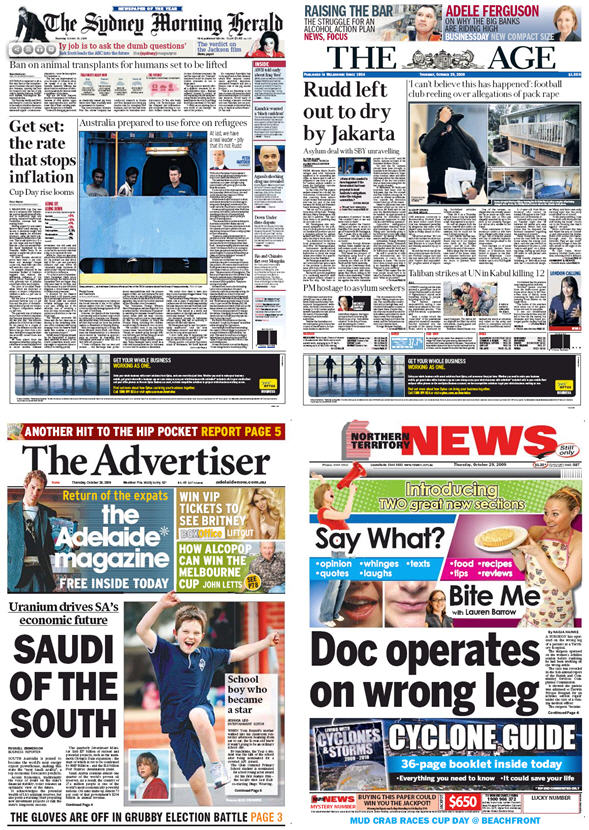 Ken Henry and RBA at odds over the scale of inflation threat – The highest rate of inflation for a year guarantees a further interest rate increase at the Reserve Bank’s Melbourne Cup Day board meeting next week, although the bank’s executive is likely to face a fight from Treasury secretary Ken Henry if it pushes for a 50-basis-point rise – The Australian

Boat crisis worsens for Rudd – Prime Minister Kevin Rudd’s refugee deal with Indonesia appeared to be unravelling last night, as Jakarta said it was not prepared to use force to get 78 Sri Lankan asylum seekers to leave the Australian customs vessel Oceanic Viking – Melbourne Age

Relationships strained by PM’s crackdown – The Prime Minister’s impatience to strike a deal with the Indonesian President, Susilo Bambang Yudhoyono, puts a strain on relationships nurtured between Indonesian and Australian police for more than 20 years, an official source said. That relationship is tested by the muscle Mr Rudd is flexing on his Indonesian counterpart to accept asylum seekers bound for Australia – Sydney Morning Herald

China signals end to big chill in diplomatic relations – China and Australia will use the visit of Vice-Premier Li Keqiang, who arrives in Sydney tonight and is on course to become the Premier in two years, to re-boot the relationship that has hit the rocks this year – The Australian

Statue of Lachlan Macquarie neglected by Parliament – Covered in a dirty blue tarp, used paint tins and surrounded by rubbish in Parliament House’s basement, this is how the Government is treating one of the nation’s great historical figures – Sydney Daily Telegraph

Rudd has designs on capital cities – Prime Minister, Kevin Rudd, says western Sydney is a region in need of better planning and would benefit if his Government took the lead in shaping Australia’s big cities – Sydney Morning Herald

Australia set to end ban on animal transplants for humans – Australia is expected to lift a five-year ban on the transplantation of animal cells and organs into humans, opening the way for research into the use of pig cells in fighting diabetes, Parkinson’s disease, Huntingdon’s disease and strokes – Sydney Morning Herald

Roxon takes a step back on cataract rebates – The federal Health Minister, Nicola Roxon, is preparing to abandon the Government’s hard line on cataract operations in a bid to prevent a Medicare debacle next week – Sydney Morning Herald

Funding boost for sex assault victims – The NSW Rape Crisis Centre has been given a $700,000 boost to cope with a dramatic doubling in calls from victims and to provide counselling lifelines to rural women. Sexual violence victims welcomed the State Government funds – Sydney Daily Telegraph

Parole system defended as protection to community – ”Parole is a far better way of protecting the community than letting someone get to the end of their sentence and walk out of there [prison] with no restrictions or controls in terms of where they live,” said Paul Byrnes, the director of the State Parole Authority – Sydney Morning Herald report on the recommended release of the man who murdered Victor Chang

Uncontrolled Muslim influx a threat – Greg Sheridan in The Australian points out that there there is a link between uncontrolled Muslim immigration and terrorism. The real historic significance of the illegal immigration crisis in our northern waters is that this could, if things go wrong, be the moment Australia loses control of our immigration program, and that would be a disaster.

Interest rate squeeze set to tighten – Michael Stutchbury in The Australian argues that inflation is easing but not fast enough for the Reserve Bank, which is set to lift its official interest rate again just before Tuesday’s 3pm Melbourne Cup start. Another 25-basis-point rise, possibly the last rate hike this year, would be aimed at the central bank’s stubbornly high measure of underlying inflation.

Low inflation may mean higher rates – Alan Wood in The Australian writes that a reasonable guess is that by next March official cash rates will be at 4per cent, which is only three 25 basis point rate rises away and hardly a radical move from the 3per cent emergency setting.

Ground control to Rudd: who the hell is running the ship? – Annabel Crabb in the Sydney Morning Herald on how the Prime Minister has experimented with increasingly novel ways of not saying.

At last, we have a real leader – pity that it’s not Rudd – Peter Hartcher in the Sydney Morning Herald lavishes praise on the national secretary of the Australian Workers Union, the very outfit that led the creation of White Australia a century ago.

Perils of a bigger footprint – Paul Austin in the Melbourne Age supports calls for for a national population debate, taking in ”the size of our population, the extent and composition of our immigration program, the capacity of our natural and built environment to cope, and the attitude and confidence of the Australian people about future directions”.

Watch this space, Rudd’s plan will leave us all in a jam – Piers Akerman thinkis it is is somewhat ironic that Rudd has anointed himself as the nation’s new city-planner-in-chief less than a week after two of his predecessors joined to excoriate the design of Parliament House, Canberra – Sydney Daily Telegraph

Sarkozy unveils massive aid package for French farmers – French President Nicholas Sarkozy has pledged a €1.65 billion aid package for his country’s already heavily subsidised farmers who have nevertheless been bludgeoned by falling prices in the sector. “I will not let French agriculture be swept away by the crisis,” the French leader said during a visit to the town of Poligny in the Jura department in the east of the country, a region celebrated for its cheese-making – EU Observer

Month becomes the deadliest of Afghan war – October became the deadliest month for U.S. troops in the eight-year-old war in Afghanistan when two bombs killed eight soldiers and an interpreter in separate attacks Tuesday – Washington Post

Rio flirts again with Chinalco – Rio Tinto and Chinalco have begun talks about jointly investing in Mongolia, only months after falling out over one of the largest and most acrimonious non-deals in corporate history – Sydney Morning Herald 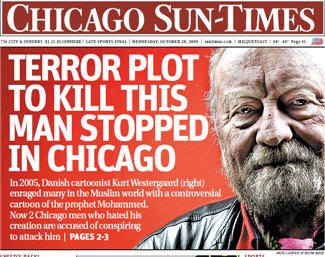 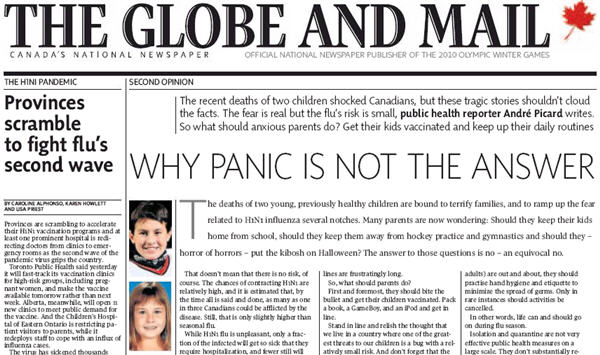 Why H1N1 panic is not the answer – The fear is real but the flu’s risk is small, public health reporter André Picard writes. So what should anxious parents do? Get their kids vaccinated and keep up their daily routines – Toronto Globe and Mail

Criticism of Crown unfair: Packer – Casino boss James Packer has taken a swipe at Crown’s detractors, saying anti-gambling campaigners and the media focus only on a handful of addicts who slip through the cracks and ignore the benefits of casinos – Melbourne Age