Papers take on a pink tinge

More factory closures on the way – Australia’s manufacturing sector faces further heavy job losses and factory closures similar to Bridgestone Tyres, a leading Rudd Government adviser has warned. Two of the country’s most powerful union leaders have also called on Prime Minister Kevin Rudd to do more to protect a struggling sector that has shed 77,000 jobs in the last year – Adelaide Advertiser

Indonesia threatens detainees with force – Police say they will use force if hunger-striking Sri Lankan asylum seekers refuse to leave an Australian Customs ship expected to dock today at the Indonesian port of Tanjung Pinang, where they will be housed in a heavily guarded detention centre – Sydney Morning Herald

Rudd’s ‘Indonesia solution’ could be lifesaver – Kevin Rudd’s “Indonesia solution” has been given the provisional thumbs-up from key players in the refugee lobby, who say intercepting asylum-seekers in the archipelago could save lives. As new details about the controversial approach began to emerge, Refugee Council president John Gibson cautiously welcomed the deepening partnership with Jakarta – The Australian

Top Lib demands loyalty to Baillieu – Victorian Liberal kingmaker Philip Davis has told disgruntled Liberal MPs to stop undermining Opposition Leader Ted Baillieu, saying there will be no change of leader before next year’s election and they should concentrate on defeating Labor and installing Mr Baillieu as premier – Melbourne Age 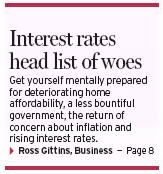 Interest rates head list of woes in our paradise – Ross Gittins writes in the Sydney Morning Herald that The next drawback of an only-mild recession is that we can’t be as sure as we were that concern about inflation can stay on the back burner.

Foreign speculation on our currency is a bubble set to burst – Kenneth Davidson in the Melbourne Age says Australia should should follow Brazil’s lead and impose a tax on incoming capital.

A new battleline for Liberal ideas – Glenn Milne writes in The Australian how Liberal Senator George Brandis has given a fundamental critique of the Howard legacy and drawn a line in the sand against any future incarnation of the party as a continuation of that legacy through Tony Abbott.

Demonising ourselves – David Burchell in The Australian sees the same unreal arguments – founded on this same vague if powerful sense of empathy – are once again taking hold in the boat people discussions. He notes that It is not mere political necessity that drives the government to dissuade people from taking to boats chiefly in the hope of a new life in a rich country. There is also the policy necessity to maintain the refugee intake within manageable limits.

Kevin Rudd gets two economic jolts – Michael Stutchbury in The Australian argues the Rudd government has been given two big wake-up calls to urgently shift from the politics of the global financial crisis to the challenge of rapid economic growth on the back of China. The first is the Business Council of Australia’s damning assessment that, for all his talk about nation-building and rapid population growth, Kevin Rudd’s infrastructure program is not up to scratch. The second wake-up call comes from news that Bridgestone will close its 44-year-old Adelaide tyre manufacturing plant which employs 600 workers.

Smith stays calm amid the storm – Phillip Coorey in the Sydney Morning Herald says Foreign Minister Stephen Smith can sometimes be more effective than his boss, who, when not in control of events, struggles for a while to find his line and length.

Iraq Ministries Targeted in Car Bombings; Over 130 Dead – For the second time in two months, synchronized suicide car bombings struck at the heart of the Iraqi government, severely damaging the Justice Ministry and Provincial Council complexes in Baghdad on Sunday, killing at least 132 people and raising fresh questions about the government’s ability to secure its most vital operations – New York Times 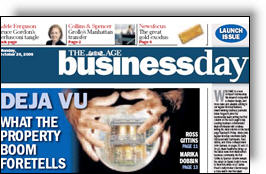 Banks squeal regulator’s plans will be too harsh – Only  months after the financial crisis, Australian banks say the banking regulator is taking too hard a line in proposed measures to improve confidence – Melbourne Age

ANZ promises to toe the line on rates – ANZ Bank has promised not to slug its 800,000 home borrowers with variable rate hikes outside of official moves by the Reserve Bank – Melbourne Herald Sun

$50bn in ETS slush fund, says Coalition – Kevin Rudd is creating a $50billion political slush fund under an emissions trading scheme and must explain how the revenue will be used, the Coalition has warned – The Australian

Advertising recovery boosts ‘old media’ – According to ad revenue consultancy Standard Media Index, in the year to September 30 local newspapers garnered a 19.5 per cent share of the spending of the main media agencies, which was a small increase on their January 2007 share of 19.42 per cent. Radio also increased its share, from 7.41 per cent to 7.85 per cent, and magazines dropped back slightly from 8.87 per cent to 7.24 per cent. Digital’s share of expenditure grew most strongly, from 5 per cent to 8.29 per cent, most of it taken from the TV sector, which dropped from a 51 per cent share to 49.04 per cent – The Australian

Parting shot as press chief quits – The retiring head of the Australian Press Council has hit out at publishers for failing to ensure accuracy, fairness and balance, and has called for a review of the accountability of editors. In a hard-hitting, and what is sure to be controversial, farewell chairman’s report to be released this week, Ken McKinnon nominates editorial standards as a matter of “substantial concern” – The Australian

Asbestos payout crisis as James Hardie’s $1.8bn fund about to run out – The $1.8 billion fund set up by James Hardie to pay for thousands of asbestos victims is about to run out of money, allowing the corporate giant to delay payments to the dying – Sydney Daily Telegraph

Cyclists in T-way brawl with bus driver – A cyclist illegally riding on a T-Way lane in Sydney’s northwest followed a bus, boarded the vehicle at a bus stop and then bashed the 64-year-old driver – Sydney Daily Telegraph

Breast cancer report shows more diagnoses but fewer fatalities – The number of breast cancer-related deaths fell by 27 per cent between 1994 and 2006, with only 22 fatalities per 100,000 women – The Australian

Aboriginal leaders seek role in national curriculum – Indigenous leaders, academics and educators are angered by a lack of consultation in the development of the national school curriculum, which they argue relegates Aboriginal people and their culture to “historical artifacts” – The Australian

Dangers at play in uniform preschool learning – Childcare centres that make kids wear uniforms and recite the alphabet are robbing them of their childhood, leading educators warned yesterday – The Australian

Abortion women told: get a lawyer – Women having abortions arising from birth defects or other medical problems will be advised by the Queensland government to get their own legal advice on whether they risk criminal prosecution – The Australian

Crime gangs plot Cup raid – Police intelligence indicates a swarm of sharply dressed thieves and frauds is already in Melbourne, or about to arrive, to prey on the 400,000 racegoers expected to attend the four-day racing festival – Melbourne Herald Sun

Green words leave their mark on Macquarie – Gugb y League transgressions and climate change now affect the way Australians speak. The latest edition of the Macquarie Dictionary includes ”bunning”, the former low-profile football slang word for group sex that entered the vernacular this year after Matthew Johns’ involvement in a 2002 Christchurch sex scandal became public. And the word ”green”, which started life in the 1981 first edition of the dictionary with two humble entries, ”green ban” and ”greenie”, has gone pandemic in 2009 – Sydney Morning Herald

Charities hand over up to 95% to street marketers – Charities such as Oxfam, Red Cross and the Fred Hollows Foundation hand over up to 95 per cent of money raised on the streets in the first year of a pledge to a marketing company – Sydney Morning Herald

Canberra looks at GP bonus plan – General practitioners will get tens of thousands of dollars in bonus payments for meeting performance benchmarks, under a British-style scheme the Federal Government is considering – Melbourne Age